Deadline  reports that Paul Wernick and Rhett Reese (ZOMBIELAND) will 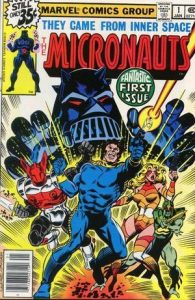 The Micronauts became a Marvel Comic in 1977, and in later years other companies such as Image Comics had short runs with the characters.
Interestingly, some of the Marvel-created comic book characters were used in other titles, with their Micronauts connection unmentioned.
October 18, 2011