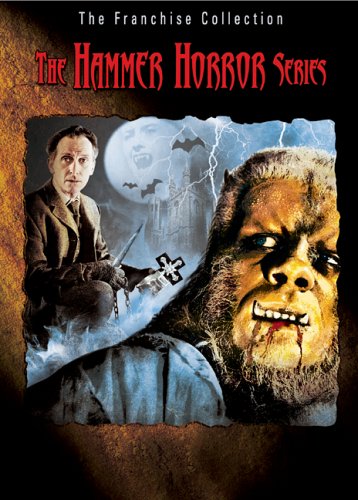 Yesterday, in a review of THE RAVEN (1935), I mentioned that, although the number of my DVD purchases is rapidly declining, thanks to the availability of movies through services like Netflix Instant Viewing and Amazon.com’s Video on Demand, I still appreciate the opportunity to own a boxful of favorite titles at a discount price, even if there is a diminished bit-rate that results from compressing two films onto one side of the same disc. After recently obtaining a 50-inch widescreen plasma television, I hauled out my Hammer Horror Series box set and tried out a few films, just to see how they looked, and the results were fantastic – not Blu-ray quality to be sure, but nevertheless bold and beautiful, as Hammer Horror should be. BRIDES OF DRACULA, CURSE OF THE WEREWOLF, EVIL OF FRANKENSTEIN – all of them looked great. Perhaps a more perceptive eye than mine could have detected some flaws such as artifacting, but I found the viewing experience to be perfectly satisfying.
For those of you who do not know, Hammer was an English movie production company that began remaking Universal’s horror classics in the 1950s, except that Hammer’s films were in Technicolor instead of black-and-white, and for the filmmakers were not afraid to actually show things like vampire fangs and a stake going through the heart. Many of the best films were produced by Anthony Hinds, directed by Terence Fisher, and written by Jimmy Sangster, with Peter Cushing (Grand Moff Tarkin in STAR WARS) and/or Christopher Lee (Count Dooku REVENGE OF THE SITH) in the starring roles.
The initial spate of Hammer films (CURSE OF FRANKENSTEIN, HORROR OF DRACULA) were not really remakes, strictly speaking; rather, they were new films based on the same literary source material. After the first few, Universal Pictures struck a deal with Hammer, which did result in some literal remakes (such as the Hammer version of THE MUMMY, which draws from several elements in the Universal series of films from the ’30s and ’40s).
The two-disc “Hammer Horror Series” contains eight films from the British studio that reshaped the horror genre in its own bloody image. The titles all came out in the early 1960s, when the company was simultaneously sequelizing their earlier hits and also poking around the in the graveyard for new spirits to evoke. Thus we get not only sequels like BRIDES OF DRACULA and EVIL OF FRANKENSTEIN but also new versions of old monsters (PHANTOM OF THE OPERA and CURSE OF THE WEREWOLF), interesting variations on familiar themes (KISS OF THE VAMPIRE), and a couple of black-and-white psychological thrillers (NIGHTMARE, PARAONOIAC).
What is especially nice about this collectionis that, although most of the more famous horror titles were already gathered together in the previous “Hammer Horror Collection” DVD box set, the films on the Hammer Horror Series DVDs are amost equally deserving of attention: all are entertaining; most are quite good, and a couple are classic in their own right; combined together, they make a must-have collector’s item for fans:
BRIDES OF DRACULA is the second in the company’s Dracula series. Although it suffers from the absence of Christopher Lee’s Count, Peter Cushing is back as Van Helsing, fighting off a handsome blond vampire (the obvious inspiration for Anne Rice’s Vampire Lestat). The production values are excellent and the story packs a few surprises.


CURSE OF THE WEREWOLF remains probably the best werewolf movie ever made. You don’t see the wolf much; the story is more like a tragic history of a hapless human, cursed from birth with the taint of lycanthropy, which emerges briefly in his younger years, then sprouts full-blown as as adult. The late Oliver Reed plays the werewolf; the film is very good but very depressing (it ends tragically, as most werewolf movies do).
PHANTOM OF THE OPERA was an attempt to do a different kind of “horror film,” with an emphasis on bigger production values and the tragic romance at the core of the story. (Supposedly, Cary Grant was slated to play the title character, so the script was written to de-emphasize the horror.) It’s an admirable effort but not quite the masterpiece it was intended to be; still, it’s much better than the interminable Claude Rains version from the 1940s.
PARANOIAC and NIGHTMARE are two psycho-thrillers, of which Hammer made several in the 1960s, following Alfred Hitchcock’s PSYCHO. The Hammer efforts are not match for Hitchcock, but they are good-looking productions, and director Freddie Francis (an Oscar-winning cinematographer) knew how to use the camera to good effect, even if the scritpts are a bit mechanical in their attempts to yield unguessable surprise endings.
KISS OF THE VAMPIRE, for some reason, is the Hammer film for people who don’t like Hammer films. Although I’m not quite sure why, I think it has something to do with the plot, which is structured a bit like a Hitchcock thriller: a honeymooning couple comes to town; the bride disappears; and when the husband searches for her, the locals claim never to have seen her. Of course, everyone is silent because they are in a thrall to the vampires in the castle. The film has a fairly remarkable ending: instead of stakes and crosses, a magic incantation sends a swarm of vampire bats that bleed the living dead dry. Unfortunately, the special effects are not as good as the concept, so the execution falls flat.
Also noteworthy: If you saw KISS OF THE VAMPIRE on late night television in the U.S.A., you saw a bastardized version. Not only were things cut out, but also new scenes were added to pad out the running time. And we do mean pad: absolutely interminable dialogue with periphieral characters who never interact with the main cast, but just stand off in the sidelines talking about stuff we already know.
NIGHT CREATURES is a bit of a fake-out. It’s actually a thriller about smugglers who disguise themselves as ghosts and/or monsters to scare everyone away and thus insure the secrecy of their operation.
EVIL OF FRANKENSTEIN is actually one of Hammer’s lesser Frankenstein films, but Peter Cushing is, as always, interesting to watch in the role. The problem seems to have been that the film was designed to be more like the old Universal horror films, so the fresh and bold Hammer approach of the previous Frankenstein installments was abandoned in favor of embracing old-fashioned cliches like torch-wielding villagers. Like KISS OF THE VAMPIRE, this film had pointless new scenes added for American television.
The set is disappointing in only a couple of ways. First, there are no bonus features, not even a trailer. Second, the films included date from the period when Christopher Lee (who had co-starred with Peter Cushing in the first round of Hammer horror classics), was away in Italy, working on films like HERCULES IN THE HAUNTED WORLD; it seems a shame to have a Hammer box set in which one half of the greatest horror double team of all time is not represented by even a single title.

Copyright 2005 Steve Biodrowski. This version has been slightly updated.