Okay, admittedly that’s an inaccurate title — we’re still a few weeks out from the festive family get-together, none of the films we’re discussing in this ep are holiday-themed, and none could fairly be called a turkey (and for that last we are truly thankful). This is just our way of saying that there wasn’t any big genre film opening in theaters this past weekend, so we’ve taken the opportunity to rally up the stuff that we prepped for other shows — public domain titles, films celebrating the 50th anniversary of their release, homevid releases etc. — and sat down to trade opinions and recommendations.
The discussion features Cinefantastique Online regulars Steve Biodrowski, Lawrence French and Dan Persons, and among the titles discussed are DEMENTIA (aka DAUGHTER OF HORROR), THE BEAST WITH FIVE FINGERS, WHITE ZOMBIE, NIGHT TIDE, MATANGA, and FARSCAPE: THE COMPLETE SERIES. If you can’t find something worth watching in that roundup, kid, you should probably turn in your geek credentials. 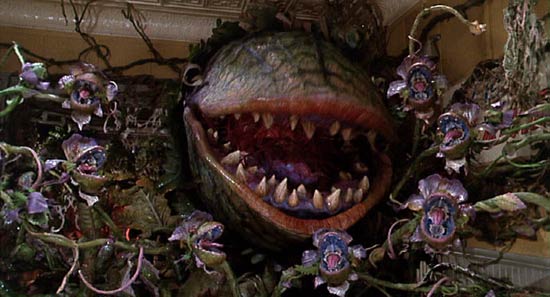 In the pantheon of memorable movie monsters, pestiferous plantlife has to rank just about last. Vampires, werewolves, zombies, mummies, mad scientists and their creations, golems and other artificial men – all of these can lay claim to having appeared in numerous classic films. Yet how many horror movies featuring frightful flora and fiendish fungi achieve cult – let alone classic – status? 1960’s LITTLE SHOP OF HORRORS comes to mind, along with its 1986 musical remake. Both feature a giant, talking man-eating marigold that is played as much for laughs as frights, but at least the blood-thirsty bush is the star of the show. Other than that, one might cite the 1962 science fiction thriller DAY OF THE TRIFFIDS (in which Earth is overrun by sinister sprouts from outer space), but for the most part wicked weeds, violent vines, and savage shrubbery have been consigned to co-starring status, showing up for a scene or two in lost worlds, dark jungles, and strange islands, or making cameos in the laboratories of various mad scientists. With THE RUINS, the latest tale of heinous herbs, currently in theatres, we take a look at some of the more memorably malignant mutations of the vegetable world, and find that by stretching the distinction between flora and fauna, we can come up with two or three creepy classics.
ATTACK OF THE KILLER TOMATOES (1978). This silly spoof takes takes an intentionally ridiculous concept and milks it for joke after joke; whether they are funny or not is almost irrelevant, because the concept itself demands laughter. On the other hand, some viewers see this simply as another bad film, no better than the ones it spoofs. In retrospect, it comes across as a poor man’s AIRPLANE; a parody of sci-fi flicks in general, it just happens to have a killer plant as its monster.
AT THE EARTH’S CORE (1976). In this enjoyably unrealistic depiction of prehistoric life inside the Earth, a man-eating plant makes a brief appearance, interrupting a fight scene between the hero and an adversary. Needless to say, even though the two men had been trying to kill each other only minutes before, the hero saves his opponent from the clutches of the carnivorous creeping vine, and the two become fast friends, joining forces to defeat the evil Mahars that rule the underground world. Lost worlds and prehistoric civilizations seem to be disproportionately populated with pestilent plant life; similar shrubbery sprouts up in the 1960 version of THE LOST WORLD and in two Hammer Film productions, THE LOST CONTINET (1968) and WHEN DINOSAURS RULES THE EARTH (1971). 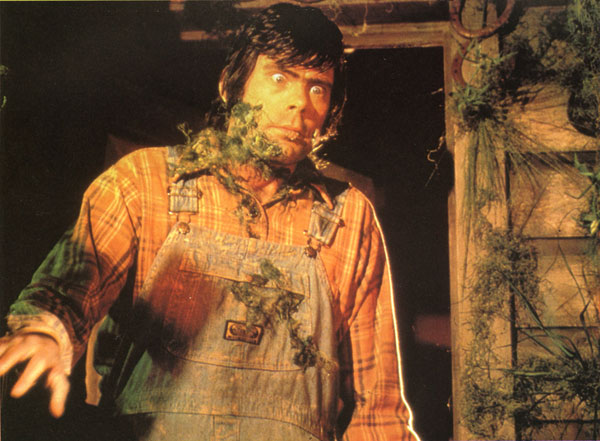 CREEPSHOW (1982). One episode of this five-part anthology film features a virulent form plant life: in “The Lonesome Death of Jordy Verrill,” Stephen King stars as the titular country bumpkin who cracks open a meteor and soon finds himself infected by some kind of fearful fungus. Unable to cure himself, Verrill commits suicide, but the plant life lives on, presumably spreading over the rest of the world.
DAY OF THE TRIFFIDS (1962). This interesting movie, based on the novel by John Wyndham, portrays what left of life in England after a meteor shower leaves the majority of the population blind. It turns out that’s not the real problem; the real problems is that the meteorites have brought spores to Earth that sprout into ambulatory poisonous plants that threaten to take over the whole world. Fortunately for humanity, it turns out that the apparently invincible flora are actually susceptible to sea water – which proves as effectve on them as on the Wicked Witch of the West. There is also a 1981 TV series, which had the luxury of being more faithful to the source material.
DR. TERROR’S HOUSE OF HORRORS (1965). This early anthology from Amicus films contains five short stories that run the gamut of classic movie monster cliches: a werewolf, a vampire, voodoo, a crawling hand, and yes – a killer plant. There is little or no explanation for the vicious vine; it is simply noticed growing around an isolated house. Soon, it is snipping phone lines, strangling a hapless victim, and trapping the survivors in the house – until they learn that the wicked weed is afraid of fire, enabling them to escape. The final shot, of the vine batting out the flames left behind by the humans, leaves open the question of whether the plant is truly defeated. 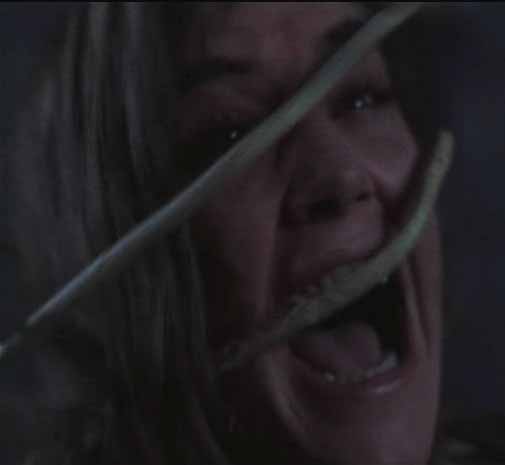 THE EVIL DEAD (1982)/EVIL DEAD II(1987). The 1982 originally features an almost deliberately offensive sexist scene wherein a female victim is – for all intents and purposes – raped by a sexually aggressive piece of shrubbery (imagery that may have inspired the “tentacle rape” sub-genre of Japanese anime). The 1987 “sequel” (which is more of a black comedy remake) features a milder version of the scene in which another female victim finds herself in the uncomfortable embrace of vicious woodland vegetation. This time, the sexual innuendo remains mostly innuendo (a few shots of torn clothing and a brief glimpse of a tiny tree limb inserting itself into the girl’s mouth). Progress of a kind, one supposes. 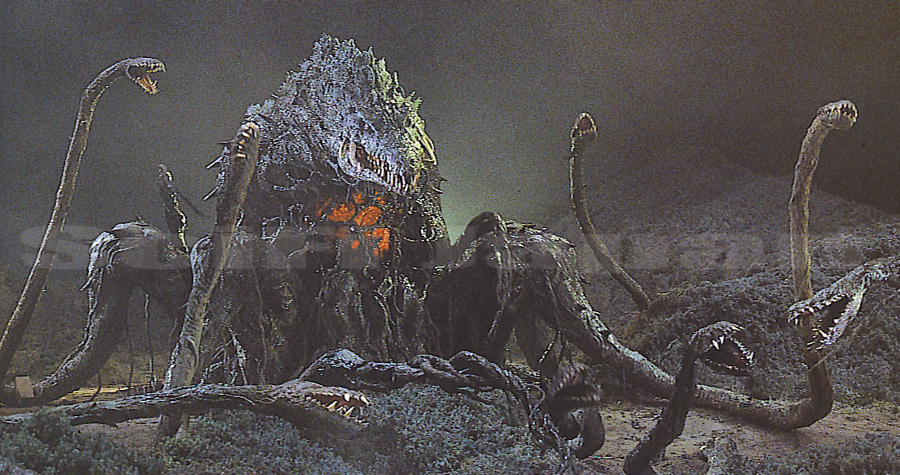 GODZILLA VS. BIOLANTE (1989). In the colorful piece of Japanese fantasy film-making, the famous radioactive dinosaur comes into conflict with a genetically mutated version of himself: a giant flower that resulted from a scientist’s efforts to resurrect his dead daughter, combining her DNA with that of Godzilla and a rose. Biolante (who, along with Audrey, is one of the few killer plants to earn a proper name) is one of Godzilla’s most fearsome foes, a mountain-sized poisonous plant, with numerous teeth and tendrils, that uproots itself for the climactic confrontation. The “science” of this science-fiction film is completely incredible, but the film hits the right fantasy note that makes its over-the-top ideas fun to watch.

INVASION OF THE BODY SNATCHERS (1956, 1978). Jack Finney’s 1954 novel tells the tale of a small town called Santa Mira, where all the residents are gradually replaced by emotionless duplicates. It turns out that the replacements are grown from plant-like alien spores. The 1956 black-and-white classic, directed by Don Siegel (DIRTY HARRY), best captures the paranoia of the book, including a wonderfully eerie scene in which the spores are scene hatching duplicate bodies. The 1978 remake is good update of the idea, transplanting the story to a modern metropolis instead of small town America. A 1993 version, titled simply BODY SNATCHERS, less interesting, and the 2007 version THE INVASION does not qualify here, because it changes the menace from spores to a virus.
KONGA (1961). This 1961 English rip-off of KING KONG features a mad professor (Michael Gough) who invents some kind of serum that enlarges an ordinary chimp, first into a man-size gorilla and finally into a Kong-size monster. Working on the theory that that was not enough to keep an English audience properly horrified, the film also has the professor growing some sort of mutant Venus Flytrap in his hot house. While Konga runs amok at the climax, one of the professor’s female students has the misfortune of getting her arm trapped – a difficult thing to do, since the carnivorous cauliflower has no tendrils to draw her in. The film cuts away, leaving her fate uncertain but implying that she was devoured. Why she could not simply pull her arm free is unclear. 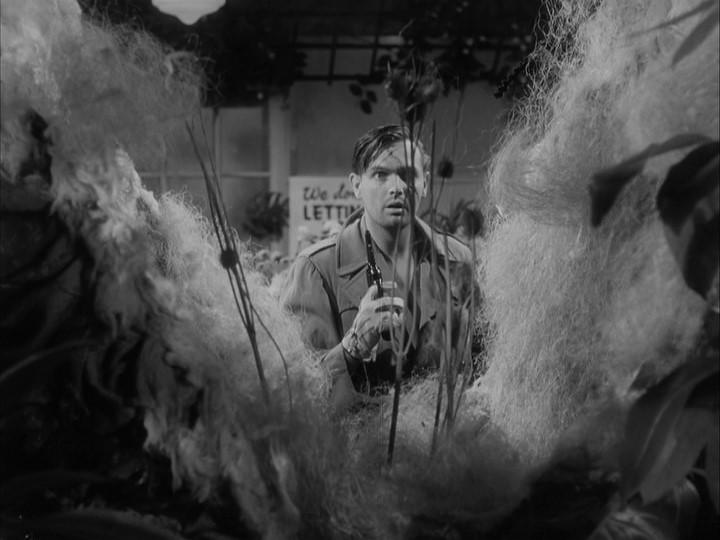 LITTLE SHOP OF HORRORS (1960 and 1986). Producer-director Roger Corman’s cult film, written by Charles B. Griffith, is famous for having completed principal photography in two days (actually, second unit work extended the schedule to nearly a week). It also gave the world Audrey, a talking blood-thirsty bulb created by Seymour (Jonathan Haze) and named after the girl he loves (Jackie Joseph). Seymour feeds Audrey drops of blood from his fingers, but when the plant grows too big, it ends up devouring whole humans. In one of the film’s funnier scenes, Seymour’s employer Mushnick (Mel Wells) fools an armed robber into searching for loot inside Audrey, with predictably lethal results. The whole film is too ridiculous for Audrey to be truly scary, but man-eating marigold is certainly quite a character, memorably demanding in an impatient, outraged voice, “Feed me! FEED ME!” The 1986 remake adds songs and bigger, better production values; it’s glossy and fun, but it lacks that low-budget independent charm that worked so well in the original.


MATANGO (a.k.a. ATTACK OF THE MUSHROOM PEOPLE, 1963). This horror movie from Japan eschews the usual giant monster formula in favor of presenting a fascinating portrait of human de-evolution. In a set-up that prefigures the American TV show GILLIGAN’S ISLAND, seven people on a boating tour end up castaway on an uncharted island: there’s the skipper, the mate, the millionaire, the professor, and two women – one an sexy entertainer, the other a cute small-town girl; the only character not carried over to the show is a male journalist. With little other food available, they succumb to eating a radiated mushroom known as matango, the unfortunate side effect of which is that they begin mutating into fungus themselves. Inspired by William Hope Hodgson’s classic short story “A Voice in the Night,” the film uses the literal loss of humanity as a metaphor for what is happening to the characters: cut off from civilization and its constraints, they regress to more primitive, barbaric behavior. The mushroom makeup is probably scary only to very young viewers, but director Ishiro Honda keeps it mostly in shadows till the end; the real horror comes from watching the characters LORD OF THE FLIES-style descent. 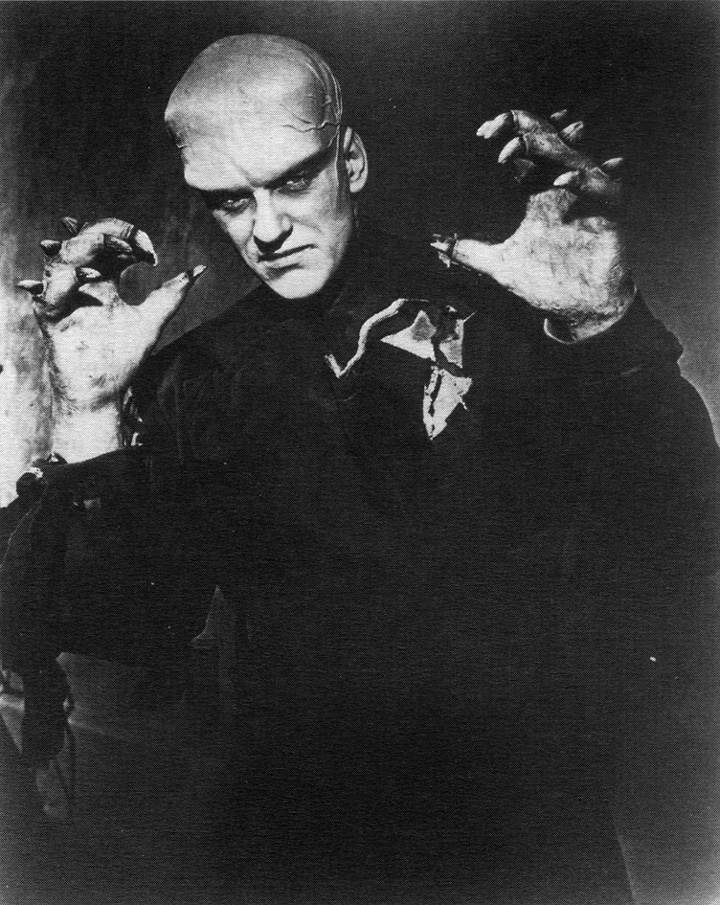 THE THING FROM ANOTHER WORLD (1951). This classic alien invasion film features a walking, hulking, blood-drinking vampire-creature from outer space with a squared-off head vaguely reminiscent of Frankenstein’s Monster – and yet the dialogue leaves us in no doubt that the alien is vegetable, not animal (“an intellectual carrot,” as one character observes). With its claustrophobic, isolated setting, this remains one of the greatest fright films ever, thanks to rapid-fire dialogue and a crafty approach to the alien, who is only briefly glimpsed, usually in shadowy light. The barely seen menace thus becomes that much more frightening when left mostly to the imagination. The man beneath the make-up was James Arness, who went on to star in the long-running TV Western, GUNSMOKE.

VOODOO ISLAND (1957). This low-budget opus offers up Boris Karloff as a scientist leading an expedition to the titular island. Somewhere during the expedition, anthropologist Claire Winters (Jean Engstrom) goes off on her own and decides it’s time for a swim. Never mind that for all she knows the jungle waters might be infested with poisonous snakes, crocodiles, or other predators. Well, she gets far worse than that when she finds herself enwrapped by the tendrils of a prehistoric man-eating plant. According to the Turner Classic Movies website, there is an alternate European version of the film that features Engstrom swimming in the nude (she wears a leotard in the U.S. version). In any case, the unlucky lass suffers the fate of expendable characters in movies like this, although she is at least spared the indignity of overt sexual molestation that would be inflicted on figurative descendant decades later in THE EVIL DEAD.