Fresh from Comic Con, here is the second trailer for LET ME IN, the remake of the Swedish film LET THE RIGHT ONE IN. While it shows a bit more than the average fan may want to see, it is still a good indicator of things to come from its production company, the recently reopened Hammer Films. Take a look!
LET ME IN is set to be released October 1st, 2010
[serialposts]

Comic Con, LET ME IN, LET THE RIGHT ONE IN, vampires

Here’s the international trailer for LET ME IN, the new version of Sweden’s LET THE RIGHT ONE IN (2008), based on John Ajvide Lindqvist’s novel.
LET ME IN stars Chloe Moretz, Kodi Smit-McPhee, Richard Jenkins, Cara Buono, Jimmy ‘Jax’ Pinchak, and Sasha Barrese .
Written and directed by Matt Reeves (CLOVERFIELD).
Due in theaters October 1st from Hammer Film Productions and Overture Films.
A new vampire film from the resurrected Hammer… Could be interesting. 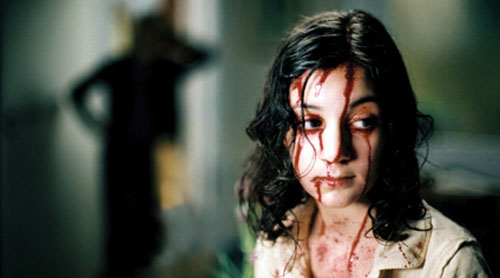 Being a movie-lover – especially a horror movie-lover – is a bit like being a junkie: you’re always looking for your next fix, and as time goes by, the high diminishes. You just don’t get the same old thrill from the new stuff, and you blame the dealer for palming off some bad shit on you, but eventually you wonder, Maybe it’s me. Maybe my system’s so worn out that I just can’t achieve that state of ecstasy anymore. Maybe there’s nothing left that can  ignite my senses and fry my brain like a jolt of pure energy pulsing through my nerves, tingling my toes and accelerating my heartbeat. Maybe it’s all over. Maybe it’s time to quit.

Then you see LET THE RIGHT ONE IN, and all your concerns are washed away in a tidal wave rush of joy that hits your mind and senses like an injection of artificial adrenalin. Watching this film feels like taking a hit of the good stuff: no matter how jaded you are, no matter how withered your tired old veins, you will feel the rush  every bit as much as if it were your very first time. And the best thing is: the buzz will last long after the film fades out.

How does this wonderful Swedish film – easily the best horror film of 2008 – achieve this? It skillfully combines an art house sensibility with the horror genre and makes the combination absolutely seamless. All the artistry and craftsmanship that would go into the most serious subject matter is lavished on a story about a a troubled young boy, who meets and eventually befriends his new neighbor, a mysterious girl who turns out to be a vampire. The story plays out like a tender character study; however, the film never forgets to be a horror movie. The genre elements are utilized to their fullest extent, but never as the be-all and end-all of the story, and almost never as an excuse for cheap sensationalism.

Instead, LET THE RIGHT ONE in figurative invites the audiences into its world, and into the lives of its characters, seducing you into identifying with the two lonely souls who tentatively find each other and form a bond that will unite them against the outside world – that is, against the world you and I inhabit. In the manner of an Anne Rice novel, the story is told from their perspective, so that what happens to them determines whether we perceive the film as having a “happy” ending,  regardless of the other characters who die. The morality may be questionable, but the emotional catharsis is undeniable.

It soon becomes apparent, however, that the power structure of this “father-daughter” relationship is exactly the opposite of what one would expect, based on their apparent ages, and gradually we realize that Hakan is what Nancy Collins (in her Sonya Blue vampire tales) would have called a “Renfield.”  As devoted to Eli as any vampire’s assistant ever was to his master, Hakan assists her by obtaining the blood she needs to survive; unfortunately, he has reached an age at which his usefulness is diminishing, and Eli has to fend for herself, drawing suspicion from some neighbors.
Meanwhile, Eli meets at night with Oksar in the courtyard outside their building, advising him to fight back against the schoolyard tyrants who terrorizing him on a daily basis, and though she initially insists that they cannot be friends, they soon draw closer and closer together, especially after Hakan is arrested after his latest botched murder attempt.

In a way, LET THE RIGHT ONE IN works some of the same territory as TWLIGHT, featuring a kind of love story between a young human and a vampire who is much older than she looks (“I’m twelve,” Eli tells Oskar, “but I’ve been twelve for a long time”). The difference is that the perverse undertones of pedophilia, though not emphasized, are not concealed beneath a Harlequin-romance-type gloss, and LET THE RIGHT ONE IN eschews any attempt to justify Eli’s existence by making her into a “good” vampire. As with the best vampire stories, vampirism is used as an elastic metaphor, a rubber mask that can disguise a variety of strange behaviors, making them acceptable for cinematic treatment.

The movie looses a little bit of its zing in the second half, once the direction of the story becomes clear. (It is pretty obvious that Oskar is being groomed to replace Hakan.) Fortunately, director Tomas Alfredson holds our interest by, ironically enough, affecting a certain detachment. Instead of hyping the action with close-ups, hand-held cameras, and jagged editing, he offers icy cold tableau, often in serene long-shots, luring the audience into perusing the details, the eyes and attention of the viewers acting as their own zoom lens.

This beautiful serenity lays the ground work for the horror: when it does erupt – at sporadic intervals – it is all the more effective for intruding into a world that otherwise seems so sedate (an effect similar to that achieved by Shyamalan in THE SIXTH SENSE). At times, his approach is almost Hitchcockian, in that suspense derives from the audience knowing something the characters do not: When an innocent man sees Eli crying under a bridge, he thinks he is helping a lost child, but we cringe in anticipation, knowing that he is being lulled into a vulnerable position by a skilled predator.

One of the best staged horror scenes occurs when Oskar, in his new-found role as Eli’s protector (during the daylight, when she is vulnerable) distracts a would-be avenger. The camera angle focuses our attention on Oskar and the intruder, but in the best Val Lewtown tradition, the attack ultimately comes from an unexpected direction when Eli awakes and leaps on the man’s back. What follows is obscured mostly behind a half-closed door, offering only a tantalizing glimpse of a bloody hand smearing a wall.
The screenplay by John Ajvide Lindqvist condenses his novel into a tight structure, filled with touching moments (this is one of the most heart-felt horror films you will ever see), but there are a few loose ends. For instance, in the book, Eli was a boy before becoming a vampire (a plot point of dubious import). All that remains in the film are a few lines where Eli asks Oskar whether he would still like her if she were not a girl, plus a brief moment when we see that Eli’s gential area looks mutilated. Viewers unfamiliar with the book assume that the reference to not being a “girl” refers not to sexuality but to the fact that Eli is not a child, her girlish appearance merely the result of the arrested aging process; and the mutilation, rather than suggesting castration, leads one to suspect that Eli was sexually abused while still a human.

Also, the script tosses a handful of gratuitous horror moments that seemed included almost for their own sake. One of Eli’s victims goes partway through the transition to becoming a vampire: a friend’s cats turn upon her unexpectedly (an entertaining moment that lasts too long, allowing one to note the CGI fakery), and she commits suicide by sunlight, exploding into flames. Other than that, the focus remains on Eli and Oskar, culminating in a poolside confrontation with the schoolyard bullies – a sequence at once subtle and lurid, in which the karma is leveled in a satisfying way. Yes, it’s horrible, but in a disturbing kind of way, it is also satisfying.

Technically, the film is a delight. The music lulls us into the shadowy world of the two protagonists, and the cool detachment of the cinematography recalls the best of the J-Horror genre, while calm vistas covered by falling snow evoke (deliberately or not) “God’s Silence” from Ingmar Bergman’s work. A handful of live-action effects break the sense of normality with a sudden intrusion of the uncanny (as when we see the vampire scale a sheer wall in the background of a long shot of a hospital); also, a judicious use of computer-generated effects shatter the beauty of the images with flashes of outrageous horror (a severed limb, a severed head) that achieve their own weird kind of beauty.

In a strange way – and I know this is a stretch – LET THE RIGHT ONE IN reminds me of DIE HARD. In that 1988 action film, the genre tropes – the explosions, gunshots, and bloodshed – were carefully orchestrated to express the conflict between John McClane and Hans Gruber. When the movie was over, I remember thinking, “This is the way it’s done. If I ever teach a course in filmmaking, this is the movie I would show.”

In a somewhat similar fashion, LET THE RIGHT ONE IN orchestrates its genre tropes – the bloodshed and the biting, the sunlight and the shadows – to express the the bond between its two lead characters. Blood is life and passion, and no drop is spilled here with igniting some passion, eliciting some emotion, forcing viewers to watch not just as voyeurs seeking a cheap thrill but as empathetic participants in the story.

This is the way it’s done. If you want to know how to make great horror movies, watch LET THE RIGHT ONE IN.

Unfortunately, the original pressing of the Region 1 DVD substituted new subtitles for those scene on theatrical prints. The new subtitles streamline (one might say, “dumb down”) the dialogue. For example, when Oskar first sees Eli standing on the jungle gym and asks, “Do you live here?” the theatrical version has Eli respond, “Yeah… I live right here, in the jungle gym.” The DVD shortens this to: “I live here.” The DVD distributor promises that the problem will be fixed on subsequent pressing, with the packaging clearly marked to indicate that the disc will feature the “theatrical subtitles.”

The title is a reference to a piece of vampire lore: blood-suckers can only cross a threshold when invited inside; conversely, it also refers to Eli allowing Oskar into her life – the “right one” who will guard and protect her while she lies vulnerable during daylight. At one point, Eli demonstrates what happens if she enters a room unbidden, her skin erupting into open wounds until Oskar speaks the invitation that will spare her.

LET THE RIGHT ONE IN tied for the Best Picture of 2008 in Cinefantastique’s Wonder Awards.

2008, greatest horror films of all time, LET THE RIGHT ONE IN, vampires