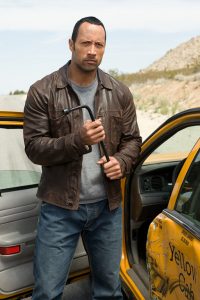 According to The Hollywood Reporter, Dwayne Johnson (formerly known as The Rock) will likely be filling in for Brendan Fraser in the JOURNEY TO THE CENTER OF THE EARTH 3D sequel.
Loosely based on Journey author Jules Verne’s The Mysterious Island,  the film JOURNEY 2: THE MYSTERIOUS ISLAND, will feature Johnson as the boyfriend of Sean Anderson’s (Josh Hutcherson, reprising in role) mother, who winds up going with the young man to search for his missing grandfather.
The switch was needed, as due to other committments, Brendan Fraser will not be available to play Sean’s father, Trevor Anderson, as he did in the 2008 film.
Brad Peyton (CATS & DOGS: THE REVENGE OF KITTY GALORE) has been set to direct  the film for New Line Cinema.
Dwaye Johnson has not yet signed, though the article expects an announcement soon.


The 1874 Jules Verne novel was a sequel to 20,000 Leagues Beneath the Sea, featuring a more benign version of Captain Nemo.
The Mysterious Island has been adapted for films a number times previously, including a Technicolor part-talking film in 1929, a 15-chapter Columbia serial in 1951, and the well-known 1961 Ray Harryhausen stop-motion effort.