Over at the Los Angeles Times, Patrick Goldstein takes a look at Universal’s “remake” of THE THING, which is set to start shooting on Friday. The bad news is that the way Universal has trashed their monster movie legacy in the past few years (with VAN HELSING and THE WOLFMAN) engenders little hope for another remake. The good news is that the new version will be less remake than prequel, telling the story of the ill-fated Norwegian research team, whose deaths are only hinted at in John Carpenter’s 1982 film.
Goldstein interviews producers Marc Abraham and Eric Newman, who did a decent job with the 2004 remake of DAWN OF THE DEAD. Their production will be budgeted at $38-million, most going for special effects, with Matthijs Van Heijningen Jr directing a cast of mostly unknown actors (Mary Elizabeth Winstead, Joel Edgerton).
Goldstein concludes:

I’m cautiously optimistic about “The Thing,” especially after hearing that the filmmakers have Carpenter’s blessing to try their hand at a new version of its story.* “I’d be the first to say no one should ever try to do ‘Jaws’ again and I certainly wouldn’t want to see anyone remake ‘The Exorcist,’ ” says Newman. “And we really felt the same way about ‘The Thing.’ It’s a great film. But once we realized there was a new story to tell, with the same characters and the same world, but from a very different point of view, we took it as a challenge. It’s the story about the guys who are just ghosts in Carpenter’s movie — they’re already dead. But having Universal give us a chance to tell their story was irresistible.” 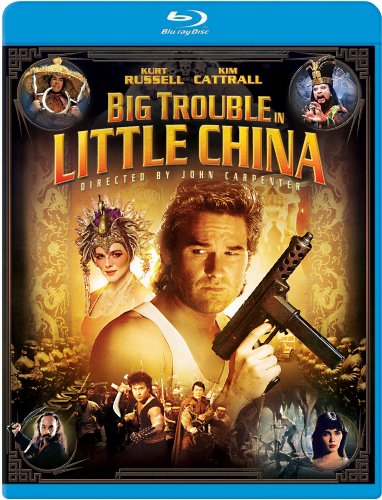 Fox’s eagerly awaited Blu-Ray of Big Trouble in Little China adds a DTS isolated score track, but otherwise appears to be a reissue of their 2-disc DVD set of several years back. We’re very pleased to report that the Blu-Ray looks fabulous, offering a giant leap in terms of color and detail over the previous 2-disc edition. We can only hope that every vintage film gets this sort of treatment.
A selection of deleted scenes and an extended ending (many of which are from a workprint) are on-hand, in addition to a featurette from 1986. A BTS stills gallery is included, along with the original theatrical trailer, to give an indication of what Fox thought the best marketing route would be. (There’s no question that the film was a tough sell; who is this Jack Burton guy anyway? Is he a joke? Why does he spend half of the film’s final fight scene unconscious? ) We’re sure that Ms. Cattrall’s agent enjoyed seeing her prominent billing on the disc artwork (is Fox shooting for Sex and the City fans?) though Mr. Russell’s might feel differently.
The most important extra, however, is the commentary track featuring Carpenter and Russell. They’ve previously recorded chats for Escape from New York and The Thing (though all three are several years old by now), and their tracks together have long been considered the high watermark of the art form; it may sound trite, but it truly is like sitting with two friends reminiscing over dinner. On the Big Trouble in Little China commentary track, Carpenter and Russell lay into the Fox marketing dept hard, placing a lot of the blame for the film’s dismal box office performance at their feet. Carpenter is wildly unpredictable on his own, but like their film collaborations, being in each other’s company seems to bring out the best in each other.
May the wings of liberty never lose a feather.
[serialposts]

The American Cinematheque will be presenting a tribute to filmmaker John Carpenter this month, showcasing some of his best horror and science fiction films: THE THING, ESCAPE FROM NEW YORK, the original HALLOWEEN, and more. Carpenter will be in person at several of the screenings to answer questions, so here’s a chance to meet your hero in person!

Below is the schedule:

All screenings will be held at the Aero Theatre. Get more information at the theatre’s official website.

I suppose that, in this day of home video entertainment – DVD, digital downloading, iPods, iPhones (what – haven’t they found a way to beam movies directly into your brain yet?) – that there may be at best limited value in extolling the virtues of the revival house experience, yet I will soldier on, within the confines of this column (i.e. Hollywood Gothique), using retrospective screenings as an excuse to discuss classic horror, science-fiction, and fantasy films when they show up on the big screen in Tinsle Town. END_OF_DOCUMENT_TOKEN_TO_BE_REPLACED