Walt Disney Pictures releases the third IRON MAN movie during the lucrative month of May (“summer” blockbusters don’t wait for summer anymore). Robert Downey Jr. returns as Tony Stark, the man in the iron suit, along iwth Dwyneth Paltrow as Pepper Potts, Don Cheadle as James Rhodes/War Machine, and Jon Favreau as Happy Hogan. However, Favreau (who helmed the first two IRON MAN films) is out of the director’s chair, replaced by Shane Black (LETHAL WEAPON), who also had a hand in the script, along with Drew Pearce, based on the Marvel Comics character. This time, the story pits Stark against a new villain, The Mandarin, played by Ben Kingsley. Also in the cast are Guy Pearce as Aldrich Killian and William Sadler as Sal Kennedy. And we’re sure Stan Lee will show up in there somewhere.
U.S. Theatrical Release: May 3, 2013 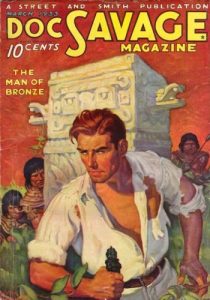 According to The Hollywood Reporter, Marvel Studios is activley developing a BLACK PANTHER movie.
The’ve signed Mark Bailey, thus far a documentary filmmaker to write a script for the character, who first appeared in Fantastic Four #52 in 1966. The Black Panther has the unusal background of being the ruler of a ountry; he is King  T’Challa of Wakanda, and mythical African nation.
It’s about time the character made it to the screen. The Panther has languished in development hell since the 1990’s with projects at Columbia Pictures and Artisan Entertainment going nowhere. Wesley Snipes (BLADE) was attached to the intended production at both studios.
Interesting for me to note in searching for art that The Black Panther is back to wearing a cape, as he did in his intial appearance.

Cheadle is quoted as saying that he does not expect War Machine to appear in THE AVENGERS, noting the at the film is already chock full of Marvel character, and that he felt Rhodey (James Rhodes) was “kind of a lone wolf” in any event.
Don’t see the point of a solo War Machine film myself, as he’s basically just a different guy in Iron Man armor. IRON MAN 3 is supposed to be coming in the relatively near future.
However, if they come up with an interesting plot, WAR MACHINE could be good action film—particularly if he’s not just used as a err… war machine.

Via his Twitter Page, Jon Favreau confrimed the rumors that he will not be directing IRON MAN 3.

“It’s true, I’m directing MAGIC KINGDOM, not IRON MAN 3. I’ve had a great run with Marvel and wish them the best.”

It’s not known exactly why Jon Favreau left the project, though there were some signs that he was less than thrilled with Marvel Studios pland for the film. Earlier this week he was quoted at MTV.com as saying:

“In theory, IRON MAN 3 is going to be a sequel or continuation of THOR, HULL, CAPTAIN AMERICA and AVENGERS. That whole world … I have no idea what it is. I don’t think they do either, from conversations I’ve had with those guys.”

NY Magazine’s Vulture, which broke the story, speculated it could also be about salary. It suggests that Marvel/Disney didn’t want to pay the $12-15 Million director’s fee (plus percentage points) Favreau would likely demand, after providing two big hits for Marvel.
Of course, Hollywood being a business, Jon Favreau’s next project, MAGIC KINGDOM, is a family adventure film for Walt Disney Pictures (who now own Marvel), which apparently will feature the Disney Studio’s characters and theme park.
Maybe Favreau simply wants to do something different, rather than another go-round with comic book superheroes. He’s been there, done that, and probably has the tee-shirt as well.