The LA TIMES Movie blog tells us that Paramount has three directors in the running for PARANORMAL ACTIVITY 2 – which is still in the script development stage even though its target release date is this October. Who are the lucky 3?

The LA Times (and the folks at Film School Rejects) seem confused by the inclusion of DePalma, but if you have ever seen his earlier films like HI MOM and GREETINGS, you know he was doing the hand-help, you-are-there thing decades before BLAIR WITCH PROJECT. In fact, he seems like the perfect director for a PARARNOMAL sequel: he knows the genre, and despite his more recent work on big-budget studios movies, he knows how to pull of a little low-budget flick. If anything the return to a smaller film may act as an antidote to DePalma’s recent string of disappointments, such as THE BLACK DAHLIA.
What is more confusing than the possible choice of DePalma is the unanswered question of why Oren Peli, who wrote and directed the original, is not on board for the sequel. When Paramount originally snapped up rights to PARANORMAL ACTIVITY (when it was a popular title on the festival circuit a couple years ago), their announced intention was not to release it but to remake it on a bigger budget, with Peli at the helm. Instead, after letting the film gather dust for months, the studio took it off the shelf and used it to fill a hole in their distribution schedule, and the result was a major sleeper success, earning over $100-million at the box office. You would think that kind of performance would earn you a second shot in the director’s chair. 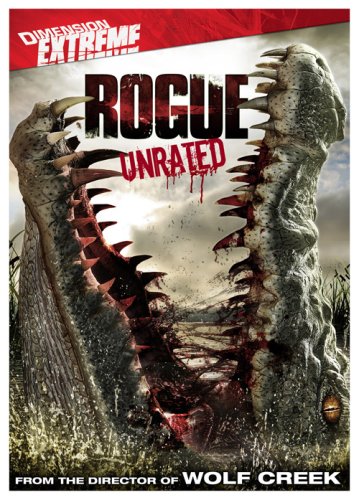 In case WOLF CREAK did not completely demolish Australia’s tourism appeal, Greg McLean takes audiences on another terrifying tour of the land down under. This time, the menace is not an evil Crocodile Dundee but a literal killer croc that gives JAWS a swim for its money. The Salt Water Crocodile may not strike the same chord of primordial dread as the Great White Shark, but writer-director-producer McLean’s expert craftsmanship yields an effective thrill ride. Hardcore horror hounds who embraced McLean’s debut film may be disappointed by the relative restraint, but his old-fashioned monster movie should appeal to viewers who found the grimly gruesome WOLF CREEK more revolting than terrifying. In other words, if you want to enjoy being scared – rather than passing an endurance test – then this rampaging reptile is for you. END_OF_DOCUMENT_TOKEN_TO_BE_REPLACED

This is the Australian film that generated a bit of a buzz when the Weinstein Brothers bought the distribution rights at Sundance Film Festival. Thanks to the Weinstein’s previous track record for picking up independent films and turning them into sleeper hits), audiences and critics were expecting a low-budget horror gem; what arrived is much closer to a diamond in the rough — much better than the standard American slasher junk, but still seriously flawed enough to make it no candidate for classic status. END_OF_DOCUMENT_TOKEN_TO_BE_REPLACED