According to Wired, Steven Spielberg plans to put a ghost into a 3-D shell. Or, more accurately, Spielberg’s Dreamworks beat out Universal and Sony in a bidding war to secure rights to make a live-action version of the 1995 film GHOST IN THE SHELL, which was based on the novel by Shirow Masamune. Predating THE MATRIX, writer-director Mamoru Oshii’s film is an intriguing piece of action-packed cyberpunk, in which an elite team of cyborg-enhanced police track down an artificial intelligence that is seeking to incarnate itself into a body. Oshii followed up with 2004’s GHOST IN THE SHELL 2: INNOCENCE – which, if anything, topped its predecessor in terms of style and substance.

The prospect of an Americanized live-action 3-D remake is intriguing, but it is difficult to imagine how it could improve upon the original. Spielberg’s more recent “serious” sci-fi films (A.I. and MINORITY REPORT) have tended to be heavy-handed and even trite. A GHOST IN THE SHELL remake would need to fire on all cylinders, supplying both the action and the intellect. 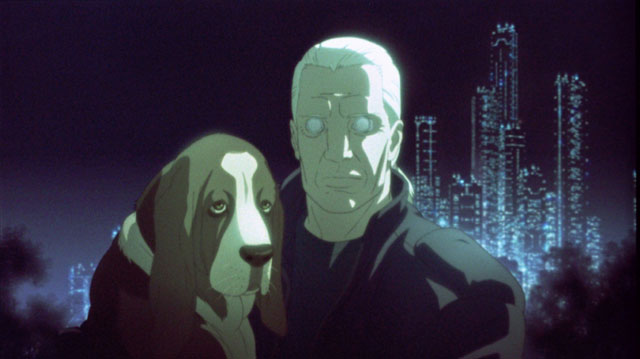 Existential angst in the form of cyberpunk anime from Japan. A form of artificial intelligence has become self aware, and now it`s seeking a way to escape from cyberspace into the real world. Ironically, the special forces tracking it down are formerly human beings whose bodies and brains have been so enhanced with modern technology that it`s hard to say how much of their humanity is left. The film explores weighty issues like: What is identity? Can artificial intelligence have a soul? Consequently, it often feels closer in spirit to an art house film than to a typical science fiction thriller, despite the great action scenes. Unfortunately, the story occasionally sags under the weight of its philosophical speculation. Nevertheless, this is an exciting effort, with an interesting premise, a strong plot, and involving characters. It ranks among the best animated features ever from Japan, easily on par with the best that live-action science fiction has to offer. END_OF_DOCUMENT_TOKEN_TO_BE_REPLACED