Science Fiction or not? Probably, but in a mininal way.

I don’t know why, but actress Sarah Roemer (THE GRUDGE 2, ASYLUM) is suddenly hot. I don’t mean in the “hot chick” sense but in the sense that suddenly search engine traffic for her is up (although presumably there is some directly proportional relationship between the two measures of “hotness”).
Whatever the reason, my two-year old review of DISTURBIA, in which she co-starred with Shia LaBeouf, has been the most visited page on the website for the last couple of days. Much as I would love to believe that this is because readers have suddenly discovered my in-depth insights on the movie, a check of the referral logs shows that “sarah roemer” and “sarah roemer hot” are sending a lot of traffic that way. My review of THE GRUDGE 2, on the other hand, has seen no bump in traffic, not doubt due to the oversight of not including an image of Ms. Roemer.
Consequently, working from the “give the people what they want” strategy, I’m offering this post-full of pictures, which will probably satisfy visitors more than the one shot of Roemer embedded in the DISTURBIA review. 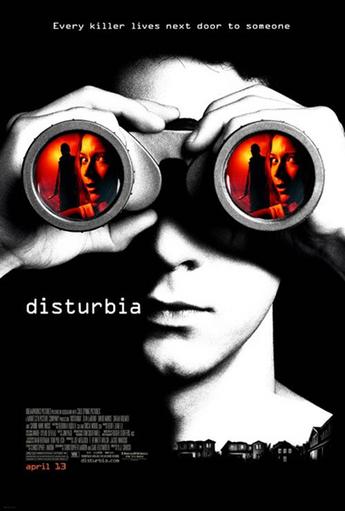 As a thriller, this is mechanical and predictable – barely one-step away from cookie-cutter formulaic – and yet the film actually works up a decent amount of genuine feeling, thanks to the cast of characters. Fear may be in short supply, but you do want to know what happens next – well, you do know what is going to happen next, but you want to see how it happens to these characters.
The script may not be particularly subtle in its set-up, but it is effective. Kale is an all-around great kid until his dad dies in an automobile accident (while Kale is driving, naturally), whereupon the high school senior morphs into a sullen problem child, ultimately punching out a teacher who upbraids him by mentioning his father. Just shy of eighteen years, Kale lands in house arrest with his widowed mother (Carrie-Anne Moss) and passes the time playing videogames and listening to i-Tunes – until Mom pulls the plug.
Forced to seek excitement elsewhere – and unable to venture from his family property without drawing the police (courtesy of the tracking bracelet on his ankle) – Kale turns binoculars and cameras on the suburban neighborhood around him (which he calls “reality without the TV). At first his interest is mostly on the pretty new girl Ashley (Sarah Roemer), but gradually he comes to suspect that another neighbor, Mr. Turner (David Morse) may be a serial killer. Unable to investigate himself, he sends his best friend Ronnie (Aaron Yoo) into the lion’s den for one of the best suspense sequences in the film, which climaxes with an effective surprise.


Scared for his friend, Kale violates the perimeter of his home, which summons the police (including an officer who just happens to be a cousin of the teacher Kale slugged). Of course, Kale is unable to convince the cops, who see no evidence to support his accusations toward Turner. After the police leave, Kale spots a damning clue on a video shot by Ronnie. Unfortunately, Kale’s mom is in Mr. Turner’s house, begging him not to press charges against her son. With the noose tightening, Turner drops the cat-and-mouse game for more forceful tactics, forcing Kale once again to break the invisible house arrest barrier and confront the killer face-to-face…
There is something weird going on in DISTURBIA, but the weirdness is more a part of the film than a part of the plot. This is a movie that seems to wax nostalgic for the glories of the past yet fears that its target teen audience couldn’t care less. We know the lead character, Kale (Shia LaBeouf), is cool because he wears a Ramones t-shirt, and posters of The Clash and The Doors dot the walls of his room, but the soundtrack does not risk offending the ears of its viewers by actually playing anything by any of those bands. (The only time Kale blasts an oldie out of his i-Pod is when – as a joke – he sends a speakerful of hurt down on a neighbor’s party, in the form of the ghastly, warbly “Lovin’ You” – because he’s jealous that he cannot attend.)
And of course the plot is cribbed from Alfred Hitchcock’s 1954 classic REAR WINDOW, but unlike THROW MOMMA FROM THE TRAIN (which openly referenced STRANGERS ON A TRAIN) and, more recently, Dario Argento’s DO YOU LIKE HITCHCOCK (which acknowledges several Hitchcock films), DISTURBIA presents the story as it were something new, secure in the belief that ticket buyers will not be aware they are receiving re-warmed leftovers. You cannot generate virtuoso levels of suspense when you have characters walking through a familiar situation that they themselves do not recognize – not even in a tongue-in-cheek SCREAM-type fashion – but the surprising thing about DISTURBIA is how well it does work, on its own, not very ambitious level.


What DISTURBIA has going for it is that Kale, Ronnie, and Sarah turn out to be appealing personalities who resemble human beings with real feelings; they’re not the stupid, horny teen-agers of standard-issue slasher films. LaBeouf and Yoo, in particular, do a good job of playing geeky friends who are not total losers. Roemer is introduced as the typical male fantasy (the beautiful girl next door who undresses with the blinds open and goes on bikini-clad dips in the pool), but gets to emerge as a friend to the two boys before any romance starts to build between her and Kale.
The script seems to want to make some kind of statement about suburbia and about voyeurism. Kale becomes a voyeur not by choice but by predicament, and we’re supposed to think that this element of his incarceration may not be so great for his psyche; all his mind has to feed on is the petty spectacle of his neighbors and their sordid affairs, in which he cannot actively participate. The question is whether he can emerge his essentially decent qualities still in tact, or will his house arrest be as psychologically damaging as a real prison stint.
The film finds the right answer, but it comes midway through the running time, in one of the best scenes: When Ashley confronts Kale about his spying on her, he admits it, but his response reveals that, even at a distance, he has developed a picture of her as a person, not just a hot body.
Unfortunately, this kind of character development has to make way for the plot, which eventually takes over, pushing the Kale-Ashley romance on the back burner (despite being set up as a partner in Kale’s stake-out, Ashley is pretty much off-screen for most of the finale).

Meanwhile, other interesting ideas are abandoned. One of the few new twists on the REAR WINDOW scenario is that, in this case, the suspect befriends Kale’s Mom, which raises interesting questions: Does Kale really believe Mr. Turner is a murderer, or is Kale projecting his suspicions on the neighbor because he fears Mr. Turner will become romantically involved with Kale’s mother and replace his father? The screenplay never bothers to develop the idea once it is introduced; in fact, Turner’s guilt is pretty much a foregone conclusion from the get-go, so there’s not a lot of cleverness that goes into unmasking him.
Director D. J. Caruso pulls out all the stops for the finale, which finally pushes the film over the edge from thriller into the horror abyss, thanks to Turner’s workshop of horror and his basement dump, filled with the putrefying bodies of his victims. The sequence elicits a few decent goose bumps, but the heavy-handed horror approach sometimes beggars belief, as when the cop enters Turner’s darkened house, gun drawn, and casually walks by an obvious hiding place, allowing the killer to jump him from behind. (One imagines that police training would have taught the officer how to avoid this. One also wishes that Hollywood would quit using the “grab-the-head-and-twist” kill method – something that doesn’t look believably lethal unless executed by a martial arts master.)


Of course it all ends well. There’s nothing really disturbing about DISTURBIA (unless you’re Hitchcock fanatic mourning the looting of the master’s grave). Fortunately, a film doesn’t have to be a masterpiece to be decent, and despite the soft-sell suspense, the movie delivers enough likable moments to make it a passable entertainment. To enjoy DISTRUBIA, you don’t have to be a teen who has never seen anything like this before, but as far as the filmmakers were concerned, it couldn’t hurt.
DISTURBIA (2007). Directed by D. J. Caruso. Written by Christopher B. Landon and Carl Ellsworth, story by Landon. Cast: Shia LaBeouf, Sarah Roemer, Carrie-Anne Moss, David Morse, Aaron Yoo, Jose Pablo Cantillo Matt Craven, Viola Davis.
RELATED GALLERY: Sarah Roemer Pictures