“In the time before…”

Back in January of 2010, a movie hit theaters and began with those rather clichéd words.  And it feels to us as if we’re talking about an ancient allegory, too.  We missed THE BOOK OF ELI when it initially hit theaters, but we’re catching up with it now.  Well, at least we’re getting to it before it journeys all the way to DVD.
The tale is a post-apocalyptic one in which our intrepid hero (Denzel Washington) feels called upon by a higher power (you know Who) to make a years-long journey to get a very important book (you know what) to a specific destination for a very important purpose.  You see, in this squalid future, there is perhaps only one of these books left (not too many other books either), and it must be protected and preserved at all costs.  So then it follows, of course, that there is a bad guy (Oldman) who wants to get his hands on the book for his own nefarious purposes.
As for the cause of mankind’s state in the film, who really knows?  We just screwed up big time, blew everything to hell, and really damaged our ozone layer, radiating ourselves and scorching the Earth in the process.  Yep, things they be a mess…in more than one aspect.
This reviewer can remember the good ol’ days when he was a young’un and rode bikes about 8 miles into town with his best bud one summer day to catch the a nifty little sleeper called THE ROAD WARIOR (1982).  Didn’t know much about it, other than the fact that it was a low-budget Aussie film with some no-name, hungry actors, and it promised some hip action for those with the thirst.  Well, it turned out to be an extra fun surprise, not to mention a star-making little jaunt for some actor named Mel Gibson and a director named George Miller.
Twenty-nine years and countless post-apocalyptic films later, it would be nice to be able to say the same for THE BOOK OF ELI; but alas, such just ain’t the case.  With a couple of A-list actors in the leads, there be no hungry no-namers to jump onto the scene.  With a budget of at least $80-million, the low-budget, devil-may-care spirit is out, too.  And with the post-apocalyptic genre having been beat to death with both good and bad whips, this somewhat plodding effort doesn’t bring much to viewers that’s different or entertaining.  However, with a ‘B’ or ‘C’ cast and some shakier production values on the technical side, it might make for good (translated schlocky & entertaining) midnight TV fodder on the likes of CREATURE FEATURES – another neat little blast from the past where just those kinds of movies ended up, to the joy of puberty-stricken teens all around. 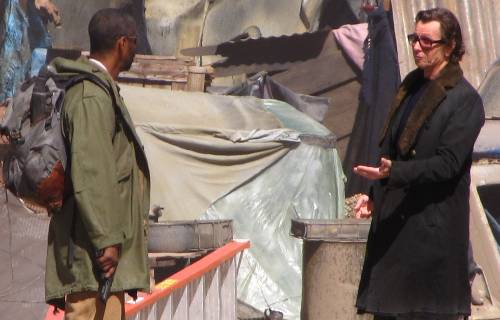 Now, this is not to say that THE BOOK OF ELI boasts no positives.  When you’ve got a charismatic lead with the talent and gravitas of Denzel Washington, you bring instant strength to just about any film.  And Washington delivers here as well.  In fact, he’s the main reason for watching a stale piece like ELI.  It sure isn’t for Gary Oldman, who hams it up pretty good, even in the quiet moments.  And it isn’t for screenwriter Gary Whitta’s script, which does nothing to enlarge the genre or give us interesting – or at least fun – characters to hiss or cheer.  Mr. Whitta comes from the world of video gaming and video game journalism.  It shows in THE BOOK OF ELI, which feels rather like a game concept transposed to the big screen.
In addition to the positive contributions from Washington, there are a couple of other factors at work: one is the technical flair brought to bear by cinematographer Don Burgess.  It may not be ground-breaking, but the gritty, monochromatic imagery is an effective and appropriate approach to the film.  Another is the stylish direction of the Hughes brothers (except for some silly slow-mo’s).  They have a sense for tone and action, but they lack the ability to guide a writer who needs guidance and tell a compelling story.  In the end, it’s too bad that the pieces don’t come together to form a cohesive whole.  One senses missed opportunity and potential.
But back to Denzel Washington for a moment.  He brings a laudable reverence to his character’s spiritual beliefs without being preachy (more on that in a minute); it’s just too bad the rest of the film is too muddy in its development and too dopey to match such heart-felt care.  Through it all, fortunately, it remains clear that Washington cares, and admittedly, that alone is kind of refreshing.
As pointed out, there is a religious element to THE BOOK OF ELI, but it exists primarily as an element of the story, not to proselytize.  Regardless of the fact that a few have labeled the film as preachy (e.g., Kim Newman from Empire Magazine), it is not.  The titular book and the main character’s faith in the words contained therein are the MacGuffin used for the story’s progression, but the journey hardly equates to preachiness.  If such is what a viewer feels, I would submit that it comes from his or her own baggage, not from anything intrinsic to the film.
After all, in one of the movie’s more lunkheaded but predictable machismo moments, our heroine (Mila Kunis) passes on a logical life-choice and the message contained in the book, in order to go back to what she just spent most of the movie trying to get away from (presumably to go get her mother?) .  And Oldman’s character is interested in the book as a means to manipulate and control the masses – not for any truth in it that he believes should be adhered to.
In the end, there is a nice little twist – if you accept that divine intervention is involved; however, we’re left thinking that, although elements are intriguing or entertaining on one level or another, this post-apocalyptic world wasn’t mapped out thoroughly enough before committing it to celluloid.  As for this reviewer, give him book worm Henry Bemis in the TWILIGHT ZONE episode “Time Enough at Last,” based on Lynn Venable’s short story of the same name.; now there be some slick, ironic and entertaining end-of-civilization storytelling.  And there’s certainly the other post-apocalyptic tale released not too long before THE BOOK OF ELI.  You know the one I mean?  It involves a bleak, thoughtful trek down THE ROAD.