Cinefantastique hit the floor of New York Comic Con 2011 and discovered… people. Lots ‘n’ lots of people. NYCC sold out for the entire weekend, and the upshot was that even the isolated reaches of the show floor became navigational nightmares at certain points during the day. Woe betide the mortal wandering Artists Alley who had a sudden hankering for a bagful of Japanese fruit chews. The trip from one end of the show to the other took slightly longer than traversing the Silk Road.
Nevertheless, in the course of producing his scheduled interviews, Dan Persons had time to wander the floor and snap up a few random encounters and events with his handy pocket camcorder. Come join him to discover 3D printers, pickled punks, Romanian comics, redemption for the Black Eyed Peas, and much, much more, including special guest appearances by cartoonist Bill Plympton and Troma’s own Lloyd Kaufman.
Check out a larger version of the video below, or watch it on YouTube.


The post-apocalyptic future, what could be more fun? Well, puppies, stick ball, and watching Donald Trump eat a bug, amongst other things. Nevertheless, the producers of PRIEST are hoping you’re jazzed to see a ravaged world in which the war between humanity and blind, sluglike creatures called vampires has reached a stalemate, and Paul Bettany’s taciturn, neck-biter-hunting priest threatens to disrupt the peace by chasing after his kidnapped niece. Is a movie that blends BLADE RUNNER with THE SEARCHERS and throws in a despicable Karl Urban — far, far from the U.S.S. Enterprise — and a toothsome Maggie Q for good measure ready to take its place in the pantheon of top-notch action films, or is it just JONAH HEX tricked out with concrete bunkers and nitro-enhanced motorcycles? Join Cinefantastique Online’s Steve Biodrowski, Lawrence French, and Dan Persons as they discuss the merits and demerits.

'The Phantom': An Empty Suit

Isabella Rossellini is wasted in a thankless, and colorless scientific villain role. I originally thought she might be head of the Brotherhood, as their leader in the comic strip is female.
The script offers no real surprises, as just about every plot development is telegraphed or predicable.
Despite all this, the film is actually fairly entertaining, particularly if you’re not already familiar with or attached to the character. It looks pretty good, with generally nice photography from DP Pierre Jodoin.
THE PHANTOM ends with a promise of further adventures. With some re-casting, a better costume (not necessarily 100 % comics-accurate, just not so awkward-looking) and some refinements— such as not making the hero so dependent on a thousands of miles away support team—a series might have possibilities.
However, at the moment I’m not too anxious to see The Ghost Who Walks return to SyFy.
June 21, 2010 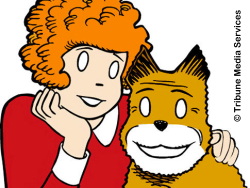