Here, in a pcture taken by  J. Anthony Hall  from his Twitter feed , is the first clear shot of Rhys Ifans as Dr. Curt Conners with Andrew Garfield as Peter Parker from THE AMAZING SPIDER-MAN.
Note that Ifan’s hand is covered with  green cloth, to aid in effects replacement.
Spider-Man fans will recall that the one-armed Curt Connors will become Spidey foe The Lizard.
Via the UK’s Daily Mail come these shots of Andrew Garfield with Emma Stone (Gwen Stacy) and Martin Sheen (Uncle Ben Parker) on the production’s New York City location shoot, taken by  Jose Perez for Splash News.

Via Ajho23’s YouTube page comes this ‘bystander video’ of THE AMAZING SPIDER-MAN location stunt work, with the Spidey-suited stunt man subbing for Andrew Grafield swinging on a cable from a overpass bridge out and over NYC traffic.
Even on a cable and harness this takes guts, and after digitally removing the support wire, and adding in webline, it should make for a nice, non-CGI actor element to the scene. 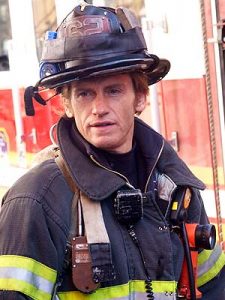 According to The Hollywood Reporter,  Denis Leary (RESCUE ME) is in talks to play Captain George Stacy, the policeman father of Gwen Stacy (Emma Stone), Peter Parker’s (Andrew Garfield) love interest.
In the comic books, Capt. Stacy deduces Peter Parker is Spider-Man, but keeps the knowledge to himself, tacitly approving his activities.  He dies after being hit by falling bricks during a battle between Spider-Man and Doc Ock — an accident Gwen blames on the web-slinger. This of course complicates her relationship with Peter, leading to a temporary break-up.
It’s unknown if the script by  James Vanderbilt and Alvin Sargent of the as-yet-untitled movie will feature any of these incidents, or variations thereof. 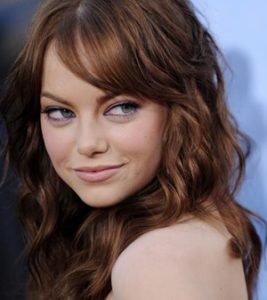 According to Deadline,  Columbia is offering Emma Stone (ZOMBIELAND) the role of Mary Jane Watson in the Spider-Man reboot.

Peter Parker’s first major girlfriend, Gwen Stacy, will also be in the film.  Dianna Agron (GLEE), Dominique McElligott (MOON),  Georgina Haig (ROADKILL) and Mia Wasikowska (ALICE IN WONDERLAND) are said to be under consideration for the role.

The Hollywood Reporter says that Nicolas Cage is in “early negotiations” to return as Johnny Blaze in GHOST RIDER: SPIRIT OF VENGENCE.
CRANK writer/directors Mark Neveldine and Brian Taylor are said to be in talks with Columbia to direct the film, which has a script written by David S. Goyer (BATMAN BEGINS). The duo also wrote JONAH HEX (2010), which bows this Friday.
Cage’s first outing as the supernatural Marvel Comics hero had a mixed critical and fan response, but grossed nearly $230 Million worldwide.
Negotiations are still in the early stages, but the article says that Sony/Columbia hopes to begin production by late fall, in order to keep the film rights and fit Nicolas Cage’s availability.
It’s unknown at this point whether any of the other characters introduced in GHOST RIDER (2007) will be included in the sequel.
Avi Arad, Ari Arad, Michael De Luca and Steven Paul are producing.
David Goyer and GHOST RIDER director Mark Steven Johnson are invovlved as executive producers.
I thought the first film was decent enough, though it had a kind of TV movie feel at times, outside of the big FX set-pieces.