BBC News reports that Marvel Studios’ CAPTAIN AMERICA: The First Avenger will be using locations in Liverpool and Manchester for filming to begin in the coming weeks.
Susan Williams, drama liaison manager of the Vision+Media film office said that Manchester’s Northern Quarter will fill in for New York City in a car chase scene.

“We suggested the area to Marvel as its wide streets, towering buildings and pre-war architecture will make the perfect 1940s New York.”


How-Do.co.uk supplied the additional information that Liverpool’s Stanley Docks area will provide the setting for an action sequence involving a large scale WWII submarine mock-up.
Since the iconic U.S. superhero film is being shot in the U.K., I guess these locations make sense. I’m  more concerned with the seemingly grudging and revisionist attitude Marvel and director Joe Johnston appear to be taking to the inherently patriotic nature of the character. 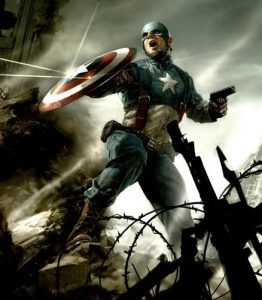 
THOR is due in theaters May 6th, 2011.
The article also revealed that CAPTAIN AMERICA: THE FIRST AVENGER director Joe Johnston did in fact shoot a day of tests with 3-D camera rigs, only to reject the equipment as too cumberson and limiting in terms of filmmaking.
Marvel Studios’ Kevin Feige said that the conversion of the films will be pleasing, especially as all the effects were planned for and will be executed in 3-D.

“It’s an amazing costume. Given the fact that his costume is red, white and blue, and it’s tight, and it could be kind of flash and over the top – and given the fact that the movie takes place in the ‘40s and ‘50s – they’ve done a really good job of making it look really cool.”

The 40’s AND 50’s? Did Evans have a slip of the tongue here, or is the film’s time frame wider than expected? In the current comics continuity, the Steve Rogers Capt. America was in suspended animation from the end of WWII until being discovered and revived by the Avengers.
Various individuals donned the costume in the post-war period, though none could really fill his boots.
On Cap’s famous shield:

“We’ve been testing a lot of shields. Last time I was in London they had six shields and I had to hold each one, see if I was comfortable with each one, see which one we all thought had the right look. The thing is pretty heavy, so I’m not sure I can throw it that far! I’ll give it my best shot, but hopefully they’ll have some sort of stunt shield when it comes to actually chucking it!”

Shield-tossing could be an action highlight, likely using CGI. Has the dreaded 3-D word been mentioned for the production?

Variety has confirmed that Tommy Lee Jones is indeed playing U.S. Army Colonel in Marvel Studios’ CAPTAIN AMERICA: THE FIRST AVENGER.
In the comics Gen. Phillips recruited Rogers to join Project Rebirth, the top secret super-soldier program.
The article suggests the character with be “re-vamped” for the film. Presumably that means the part will be larger, as it’s expected much of the plot the will center on Steve Rogers’ (Chris Evans) transformation and eventual full assumption of his duties as Captain America, after being at first side-lined by a cautious military.
Tommy Lee Jones joins other cast members Hayley Atwell, Sebastian Stan, Stanley Tucci, Neal McDonough, and Hugo Weaving.
Joe Johnston (THE ROCKETEER) directs from a screenplay by Christopher Markus and Stephen McFeely.
CAPTAIN AMERICA: THE FIRST AVENGER is set for a July 22nd release by Paramount Pictures.