This week features a bold new experiment in podcasting, the likes of which have seldom if ever been seen in our lifetimes! At the end of this week’s Cinefantastique Horror, Fantasy & Science Fiction Podcast 1:20, we let the recorder run on just to see what happened. The result is the Cinefantastique Post-Mortem Podcast, a free-form chat among Dan Persons, Lawrence French, and Steve Biodrowski, who hash over uber-geek details and issues too esoteric to be included in the regular podcast.
For this week’s debut, they follow up on the Cinefantastique Podcast 1:20, which delivered 50th anniversary tributes to a trio of classic horror films from 1960. The Post-Mortem Podcast delves into some of the myths and legends surrounding Alfred Hitchcock’s PSYCHO. Also on the menu: a discussion of whether the legacy of STAR WARS and JAWS can be held responsible for today’s summer blockbusters, an issue addressed in this previous Sense of Wonder editorial.

Sense of Wonder: Was Hollywood ruined by Star Wars and Jaws? 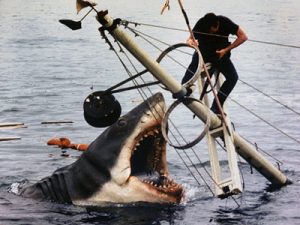