Aliens invade Los Angeles – well, Santa Monica, actually – in BATTLE: LOS ANGELES, the subject of this week’s episode of the Cinefantastique Spotlight Podcast. Dan Persons returns as host, hashing over the details of the latest entry in the alien-invasion sub-genre with Steve Biodrowski. The story follows an old soldier on the verge of retirement (Aaron Eckhart) leading a group of marines fresh out of training into battle with mysterious invaders blasting the Pacific Coast into oblivion. Think of it as BLACK HAWK DOWN meets INDEPENDENCE DAY – a gritty, grunts-eye view of the usual “war of the worlds” scenario. Sure, we’ve seen it all before, but the film makes it worth seeing again.

Columbia Pictures unleashes this film about – yes – another alien invasion of Earth. (Didn’t that just happen in SKYLINE?) Aaron Eckhart stars as a marine sergeant on his last day in the service, who is sent to La-La-Land to lead his men in a battle against what turns out to be aliens storming the beach. Jonathan Liebesman directed, from a script by Christopher Bertolini. Michelle Rodriguez and Bridget Moynahan co-star. Curiously, most of the action was shot in Louisiana; guess L.A. wasn’t ready for its close-up. We like the idea of a grunt’s-eye view of an alien invasion, but do we really need another skaky-cam movie right now? Rated PG-13.

Things get a bit more exciting (and strange) with this latest trailer for BATTLE: LOS ANGELES.

” For years, there have been documented cases of UFO sightings around the world — Buenos Aires, Seoul, France, Germany, China. But in 2011, what were once just sightings will become a terrifying reality when Earth is attacked by unknown forces. As people everywhere watch the world’s great cities fall, Los Angeles becomes the last stand for mankind in a battle no one expected. It’s up to a Marine staff sergeant and his new platoon to draw a line in the sand as they take on an enemy unlike any they’ve ever encountered before.”

Directed by Jonathan Liebesman from a screenplay by Christopher Bertolini. Stars Aaron Eckhart, Michelle Rodriguez, Lucas Till.
Due out March 11th from Sony Pictures, Tri-Star/Columbia. 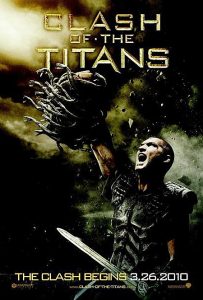 By now you’ve no doubt heard of the upcoming film BATTLE: LOS ANGELES, starring Aaron Eckhart as one of a platoon of Marines fighting an alien invasion in the City of Angels. Just today, new teaser posters have been released showing that this war may not be as new as we think it is. BATTLE: LOS ANGELES will hit theaters March 11th, 2011.