A film with a vampire squirrel and a werewolf chihuahua can’t be all bad – just almost all bad.

With a title like VAMPIRES SUCK, you don’t buy your ticket expecting sophisticated satire, but is it really too much to ask for a few funny jokes? Sadly, the answer is yes. This attempt to send up Stephanie Meyer-inspired blood-suckers is so anemic in its aspirations, so lifeless in its execution, that it achieves the near-impossible: it makes the TWILIGHT franchise seem unjustly maligned; in fact, those teen-vamp-romance flicks start to look almost good by comparison.
Writer-directors Jason Friedberg and Aaron Seltzer, the duo responsible for turning bad spoofs into a mini-industry (EPIC MOVIE, DATE MOVIE, DISASTER MOVIE etc), have neither the interest nor the intelligence to offer an insightful deconstruction of THE TWILIGHT SAGA; they can barely be bothered to make jokes. Their strategy for humor is to simply recreate scenes from the TWILIGHT films and have someone state out loud what goes unsaid in the originals.
For example, when Becca Crane (the film’s take on Bella Swan) arrives at her new school for the first time, she announces that she has no personality but hunky guys like her anyway, whereupon the high school jock walks up and says, “You’re boring. Want to go to the prom?” This approach elicits a giggle or two before it wears thin; the closest it comes to making an actual point is when one of the statements (explaining the popularity of romantic vampire genre by referring to teen girl’s ambivalence about sex) is attributed to a tweet by author Stephanie Meyer herself.
With a target as big as TWILIGHT, VAMPIRES SUCK cannot help scoring a hit or two, but it never strikes the bulls-eye. There are no great moments, only occasional flashes of what could have been. Edward Sullen’s penchant for drinking blood from animals instead of people results in a goofy vampire squirrel that is immediately discarded before it can steal the show from the human actors. When would-be-werewolf Jacob (Chris Riggi) transforms into a chihuahua, he warns an unimpressed vampire that he always travels with his pack – and for a brief moment the film seems on the verge of offering an unexpected twist on BEVERLY HILLS CHIHUAHUA; instead, it settles for a lame gay-dance spoof. A gag with Edward carrying Becca at high-speed features a good punch-line, but the set-up goes on too long, allowing us to guess, before we actually see, that he’s riding a Segway.
Other than that, Friedberg and Seltzer’s idea of a joke is to include endless shots of vampires hissing at the camera. Oh, and Becca’s father, the clueless town sheriff, displays an amiable indifference to the mysterious vampire-related incidents in his precinct, dismissing them alternately as the the work of either Canadians or the Kardashians.
What’s sad about this is that, with its helicopter shots and other obvious production value, VAMPIRES SUCK actually looks better than the first TWILIGHT movie: the trio of evil vampires are more threatening and sinister than those in the “serious” film, and their fight scene with a fisherman features better stunts and special effects. With a little effort, it’s easy to imagine these resources being marshaled in a way that not only spoofed the target but also exceeded it. Unfortunately, Friedberg and Seltzer are too lazy to aim that high.


As Becca, Jenn Proske is less bland than Kristen Stewart, lacking the clueless “duh” expression that Stewart wore throughout most of TWILIGHT. Proske could even have been appealing if the film hadn’t forced her to perform so many embarrassingly unfunny bits.
Lanter fares little better. In HEROES and SORORITY ROW, the actor has proven himself adept at playing apparently nice, handsome guys who turn out to be unexpected creeps, but VAMPIRES SUCK never dares to go there (imagine if Friedberg and Seltzer had the nerve to portray Edward as the pedophile predator he really is). The overdone vampire  makeup suggest a circus clown more than the undead; the only time Lanter looks good in the role is when he is seen on a bender: unshaven and unkempt, his face suddenly develops some character, and his distraught reaction to a late-night screening of the 1958 version of THE FLY (“Why can’t they just be together?” he says of the monster and the girl) is priceless.
Although it has gone unremarked in critical circles, we have been living in the era of movies as tribal identifiers at least since the release of STAR WARS, EPISODE 1: THE PHANTOM MENACE (1999). Lucasoids no longer care whether the STAR WARS films are any good; attendance is mandatory to maintain your good standing in the tribe. THE TWILIGHT SAGA performs a similar function for its fans: you go to show support for Team Edward or Team Bella, not because you expect decent entertainment. In attempting to spoof this phenomenon, VAMPIRES SUCK becomes a ghastly mirror-image of its intended target: viewers attend not to be entertained but to announce their membership in the “I Hate Twilight” tribe. In this case, membership is definitely not worth the price of admission. 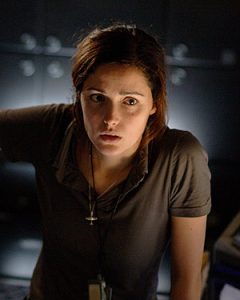 Deadline.com reports that Rose Byrne (28 DAYS LATER) and Oliver Platt (2012) have joined the cast of X-MEN: FIRST CLASS.
Byrne (pictured) will play Moira MacTaggert, reportedly Charles Xavier’s (James McAvoy) love interest in the film.
Oliver Platt’s role is said to be a new, non-mutant character, referred to as The Man in Black.
Jason Flemyng (CLASH OF THE TITANS) will portray the teleporting mutant Azazel, the future father of the X-Man Nightcrawler, as reported earlier today.
X-MEN:FIRST CLASS is a 20th Century Fox film, directed by Matthew Vaughn (KICK-ASS). Production begins this September in England.

20th Century Fox Film Corporation releases this alleged spoof of vampire movies from Jason Friedberg and Aaron Seltzer, the writer-director team responsible for MEET THE SPARTANS, EPIC MOVIE, DATE MOVIE, and the upcoming SCARY MOVIE 5. Expect lots of references to THE TWILIGHT SAGA, along with bits from ALICE IN WONDERLAND and other movies. The trailer doesn’t promise much in the way of laughter, but the werewolf character who turns out to be a chihuahua is good for a giggle. Matt Lanter, Arielle Kebbel, David DeLuise, Crista Flanagan, Kelsey Ford, and Ken Jeong star.
Release date: August 18

Tarantino to pen 'The Shadow'? 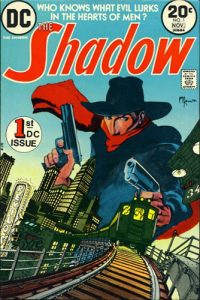 After roughly six week of rumors, the LA Times reports that we may be one step closer to Robert Rodriguez directing Ryan Reynolds in the upcoming X-MEN ORIGINS: DEADPOOL. A deal hasn’t been struck quite yet, and all we know for sure is that Rodriguez has been sent a draft of the script, but he and Fox are said to be negotiating at this point.
[serialposts]

After a trailer surfaced for THE CHRONICLES OF NARNIA: THE VOYAGE OF THE DAWN TREADER, the third installment of the series based on the children’s novels by C.S. Lewis, it seems we’ve now got our hands on a new poster and two promo images. 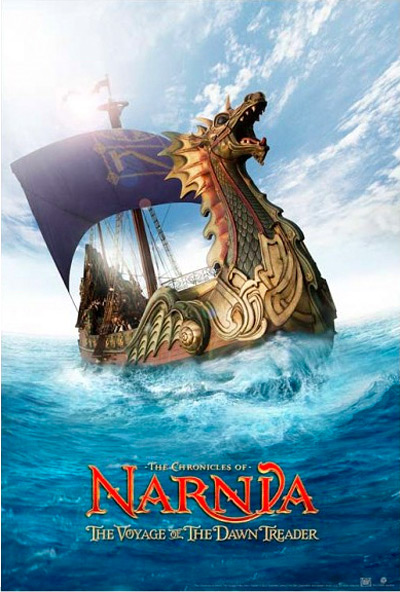 
Actor Tom Felton, who gained notoriety for his portrayal of the role of Draco Malfoy in the HARRY POTTER films, has signed on to 20th Century Fox’s RISE OF THE APES, a prequel to the beloved PLANET OF THE APES.
Felton’s character is said to be the co-owner of an ape facility along with his evil father (Brian Cox). Freida Pinto, John Lithgow, and James Franco make up a team of scientists whose work with an ape named Caesar spells doom for all of humanity.
It should be noted that the visual effects for RISE OF THE APES are being handled by Weta Digital, the some effects house that worked on AVATAR. You can expect photorealistic apes for the first time in the franchise’s history. RISE OF THE APES is slated for release on June 24, 2011.
Sources: ScreenRant, Twitter
[serialposts]
July 19, 2010

Superherohype says it has confirmed that Nicholas Hoult (pictured, CLASH OF THE TITANS) has been cast as Hank McCoy (the Beast) and Caleb Landry Jones (THE LAST EXORCISM) will play Sean Cassidy (Banshee) in X-MEN: FIRST CLASS.
Entertainment Weekly says that Lucas Till (THE SPY NEXT DOOR) has also been cast in the film, possibly as Alexander Summers, brother of Scott Summers (Cyclops).

In the comics, Alex would resent his brother’s leadership and by the book attitude, eventually rebelling as the pisionic-powered Havok.
The article warns this might be disinformation from 20th Century Fox, in an attempt not to reveal all the roles too early.

At first glance, Nicholas Hoult looks a little slight to play Hank McCoy, depicted in the early comics as a brainy, brawny, broad-faced and usually barefoot and cheerful character. (A nice change from the generally angst-filled teens at Professor Xaviers School for Gifted Students.)
It remains to been seen what path the Matthew Vaugn-directed film version will follow, and if McCoy will assume his later hirsute beastly form

Predators – Behind the Scenes Part 3

Predators – Behind the Scenes Part 2

The second of three brand new behind the scenes clips from 20th Century Fox’s PREDATORS.
[serialposts]