Actor Roger Moore, who played James Bond in seven films, succumbed to cancer in Switzerland at the age of 89. His family made announcement was via Twitter. Besides acting, Moore was a goodwill ambassador for UNICEF and an advocate for children’s causes and animal rights. In 1999, he was given title Commander of the British Empire.
More first gained in the television series THE SAINT. He was supposedly an early choice to play James Bond when Albert R. Broccoli and Harry Saltzman were preparing DR. NO, the first big-screen adaptation of Ian Fleming’s spy novels, but the role went to Sean Connery instead. After seven Bond films (including one with George Lazenby), Moore finally got to play 007 in LIVE AND LET DIE (1973), which was a box office success though not beloved by fans, who thought that Moore lacked Connery’s lethal quality.
Roger Moore was the right Bond at the right time, emphasizing the humor when the series reached a point it could not be taken even half-way seriously. In interviews, he expressed amusement that 007 was supposed to be a “secret” agent, yet every bartender in the world knew he wanted a “vodka martini – shaken, not stirred!” Moore avoided ordering the famous drink onscreen, though other characters would order it for him. Moore added his own touches to the role, such as smoking cigars rather than the Turkish cigarettes mentioned in Fleming’s books. The actor played up the one-liners (which he delivered with aplomb even when they were duds) and provided occasionally comical reaction shots to Bond’s predicaments. At times, the films approached self-parody, which irritated fans looking for something closer to Fleming’s hard-edged original.
In truth, the flaws with Moore’s first two 007 films were more due less to him than to the direction the series was taking, even before he arrived. A look at Connery’s last official Bond, DIAMONDS ARE FOREVER (made by the team of director and writers who would do the first two Moore Bonds), reveals everything that’s going to go wrong with LIVE AND LET DIE and THE MAN WITH THE GOLDEN GUN – including the goofier tone, to which Connery was ill-suited. Moore’s films got better with THE SPY WHO LOVED ME (1977), one of the most enjoyable 007 outings. After the cartoonishy comical follow-up, MOONRAKER (set in outer space to cash in on STAR WARS), Moore got more serious in FOR YOUR EYES ONLY (1981) and OCTOPUSSY (1983).
Though Moore’s tenure as the world’s most famous fictional secret agent ended in 1985 with A VIEW TO A KILL, he continued to work, appearing in television productions and providing voices for such films as CATS AND DOGS: THE REVENGE OF KITTY GALORE. His other film appearances include FFOLKES (with David Hedison, who had played CIA agent Felix Lighter in LIVE AND LET DIE); THE WILD GEESE (with Richard Burton); and THE QUEST (with Jean-Claude Van Damme). He was also in an odd doppleganger movie, THE MAN WHO HAUNTED HIMSELF.
Read Variety’s obituary here.


If box office numbers are to be believed, we’ve been suffering a severe case of Bond withdrawal. SKYFALL, the newest film featuring secret agent 007, had its best opening of any Bond film as the franchise celebrates its 50th anniversary. And critical consensus has so far fallen into line with that of ecstatic audiences, contending that the latest adventure — in which Bond, James Bond (Daniel Craig) battles a computer mastermind (Javier Bardem) determined to take down MI6’s M (Judi Dench) for painfully personal reasons – is among the franchise’s best.
But simple plaudits are not enough for the Spotlight gang, and so Cinefantastique Online’s Steve Biodrowski, Lawrence French, and Dan Persons delve deep into the details of this high-stakes attempt to revive and redefine the long-running series, debating where the film achieved its goals, where it exceeded expectations, and where it fell short. It’s one of our liveliest conversations, fitting for a film that demonstrates that it’s not too late for an old cold-warrior to undergo a rebirth.
Plus: What’s coming to theaters this Friday.

James Bond is 50.1 Wow, who thought the old boy would ever make it this long? After all, the “misogynistic dinosaur” should have been irrelevant after the end of the Cold War, right? Apparently not. In fact, James Bond is probably the longest running franchise in the history of cinema: beginning way back in 1962 with DR. NO and extending to tomorrow’s release of SKYFALL, Agent 007 has weathered numerous changes in pop culture and geo-politics, with no end in sight.
What is the secret to Bond’s longevity? Well, the obvious things I suppose: sex and violence never go out of style. However, there is more to the story. To begin with, the producers have been smart about adapting to the times. Even at the very beginning, in the early 1960s, the films downplayed the anti-communist of Ian Fleming’s novels, in favor of highlighting the secret organization known as Spectre (which – contrary to the book- was responsible for the devious events in the film version of FROM RUSSIA, WITH LOVE ). A decade later, when relations between East and West began to thaw, 007 could even team up with his Soviet counterpart in THE SPY WHO LOVED ME (1977). Was this move politically motivated? No, the filmmakers just wanted a property that they could export everywhere in the world. Whatever their motivations, the result helped avoid fixing 007 in a context that would trap him in the past.

Recasting has certainly helped. Fans of a particular generation (just before mine) probably still regard Sean Connery as not only the first but also the best James Bond. However, when the spy routine was starting to seem worn out in the early 1970s, and the series moved toward self-parody, Roger Moore was there to put tongue in cheek and play the whole thing for laughs. Many purists have never forgiven Moore for this, but the move toward overt comedy actually preceded his arrival; though he never matched Connery’s lethal poise, Moore could deliver a one-liner as well as anyone, and he truly was what the series needed at that time.
Later, Pierce Brosnan tried to fuse the strengths of his predecessors; along with his natural inclination for light comedy, Brosnan attempted to weigh in with greater dramatic force, but the scripts he worked with were a bit too tied to the old formula, adding perhaps a serious touch or two but always undercutting them with a laugh, whether appropriate or not. Still, there was an interesting idea lurking just beneath the surface: at the end of the 20th century, the films suggested, all-out war was too dangerous a proposition; the only sensible way to fight our battles was through covert means, avoiding the kind of full-blown military confrontations that could lead to WWIII. This made Bond relevant again.

Most recently, we have the Daniel Craig Bond, who is unfairly derided as a Jason Bourne clone. In fact, Craig’s version of 007 harkens back to the conception presented in Ian Fleming’s novel. His Bond is vulnerable and fallible; he can put on a tuxedo and sit down at the casino table, blending in with high society around him; but underneath the polished facade, he is a stone-cold killer, who takes his job very seriously. The occasional quips (when they do come, which is not so often) are like explosive exhalations from a pressure-valve – spat out because they can no longer be contained.2
Finally, the last explanation I will offer for 007’s continued presence on the screen is this: he is the ultimate embodiment of grace under pressure. As a culture, we are perhaps a bit more cynical these days about noble heroes doing the right thing for purely altruistic purposes, but we can always appreciate someone who keeps his cool even under the most dangerous circumstances. There is something pragmatic about James Bond – almost working class (at least in the Connery and Craig incarnations). He’s not exactly one of us (how many of us know the difference between shaken and stirred?), but he is what many of us imagine we would like to be, in our fantasies if not our realities.
In a world in which old-fashioned warfare seems out-of-date and inadequate to the dangers we now face, the 50-year-old James Bond seems perfectly suited to the times. With the hope of global peace and harmony still a distant dream that will not likely be realized in our lifetimes, I suspect 007 will be with us for a long time to come.
FOOTNOTES: 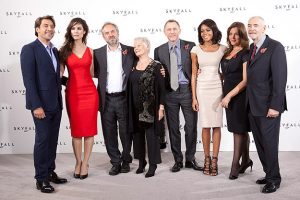