Last month I heard about a forthcoming science fiction film by thumbing through one of my wife’s entertainment magazines. A little further research on the Internet led to a trailer, and after viewing it I was hooked. The movie became an instant part of my “must see” list for the last few months of 2009. The film is SURROGATES, and it caught my eye because it includes several elements that are attractive for me, especially its storyline, which involves the increasing interpenetration (if not dependence) of human beings upon technology, particularly various digital technologies such as robotics.
Like many science fiction movies these days, SURROGATES is based upon a graphic novel, in this case by Robert Venditti and Brett Weldele. It tells the story of a society in the not too distant future when advanced robotics have come to play a significant part of life around the world. As the film’s opening narrative discusses, the first experimentations with robotics began with an animal-robotic interface, before moving on to the use of robotics to assist those with physical disabilities, and then taking quantum leaps in application when the military became involved in the technology by creating robotic troops to enter into battle.
The robots are the products of Virtual Self Industries, and the technology becomes so advanced that it is possible for human beings to connect the neural pathways of the brain to robots so that everything the robot experiences is felt as the experience of the human being. This makes it possible, indeed desirable, that people live their lives not through the imperfection and limitations of their bodily selves, the “meat bags” as they are derogatorily referred to in SURROGATES, but through robots who are designed by each human being as an idealized expression of themselves. This creates something of a utopian world where fantasies can be lived out, and crime rates drop dramatically around the world as people immerse themselves in their surrogacy of robotic life and fantasy.
But in human experience utopia is often interrupted and broken. In the case of SURROGATES someone begins killing robots, which shouldn’t be a problem because of built-in safeguards that protect human users from damage and destruction to their “surries,” but in this case the deaths of robot surrogates lead to the deaths of the human users on the other end. Murder of human beings through surrogates presents the first instance of murder in many years.
This leads to a criminal investigation led by FBI agent Greer (played by Bruce Willis), with his partner agent Peters (Radha Mitchell). Like the rest of the world, Greer and Peters live their lives through robotic surrogates, and as they pursue the investigation they discover the frightening ability of a human to kill another human through secret military technology, apparently with connections to Virtual Self Industries, and the serious falling out between the corporation and its founder, Older Canter (James Cromwell) who’s son was one of the first murder victims that began the investigation.
Along the way Greer uncovers conspiracy and cover-up, questions about the military and the extremely powerful VSI, a potentially dangerous tension between the mass of society dependent upon surrogates and a group of humans living without and in opposition to surrogates on human-only reservations under the leadership of The Prophet (a quasi-religious figure played by Ving Rhames), and through all of this Greer comes to grips with his own relationship to surrogates and its impact upon his marriage.
Although SURROGATES will likely not set great box office records, in my view the film is a significant one. Many times I build up great expectations based upon film trailers and storyline summaries, only to become somewhat disappointed when the film does not live up to its hype and my perhaps unrealistic hopes. Thankfully, this was not the case with SURROGATES. It presents a well written storyline that includes a good balance of drama, as relationships and tensions between characters are developed, and a good dose of action and crime drama to compliment these elements. When this is combined with the futuristic possibilities and questions posed by our relationship with technology, it makes for not only entertaining, but also thought provoking cinema as well.
In terms of the serious cultural issues suggested in the film, in my reflections on these matters prior to the film’s release I wrote previously:

“Although the sci-fi premise and scenario of SURROGATES might seem far removed from our own circumstances, it may not really be the case. Consider our fascination with ‘pseudo-events,’ the play revolution fueled by digital entertainment, and posthumanism. In his book The Image: A Guide to Pseudo-Events in America (Vintage, 1992), historian Daniel Boorstin argues that Americans live in an ‘age of contrivance’ and that our public lives are filled with various ‘pseudo-events’ or ‘artificial products’ that simulate reality and which leave the individual who experiences the events or utilizes various products feeling as if they have experienced reality when in fact they have had their stereotypes confirmed by an encounter with the simulation.
“In addition to our experiences with pseudo-events, recall the great amounts of time we spend on play, particularly in the digital realm. Play is becoming an increasingly significant facet of life in those parts of the world where economic factors allow it to be so. This is particularly the case with the continued popularity of professional sports, and a new dimension of play has arisen with the increasing numbers of people spending time in various virtual worlds in cyberspace, such as Lineage, Gaia Online or Second Life. In his book Exodus to the Virtual World: How Online Fun is Changing Reality (Palgrave MacMillan, 2007), Edward Castronova believes a ‘fun revolution’ is underway that will change the way in which we behave in the ‘real world.’ He says that, ‘An understanding of fun will become integral to understanding why the real world is losing people [to virtual worlds], and what to do about it.’
“Finally, there are the discussions of transhumanism or posthumanism where the combination of robotics and human consciousness are seen as the next steps in human evolution and societal development. When the concepts of pseudo-identity, the large numbers of people spending great amounts of time in cyberspace or in other forms of digital entertainment, and posthumanism are taken together, it is not too much of a stretch to conceive of a future wherein people play or live their lives immersed in fantasy scenarios through robotic avatars as in SURROGATES.”

Millions of people spend countless hours online immersed in social networking sites like Facebook, or in alternative worlds like Second Life. Is it much of a stretch of credibility and possibility to consider human beings spending most if not all of their lives experienced through robotic surrogates if the technology were available and affordable?
Science fiction has a long history of presenting warnings to human beings about the dangers of technology, including the robotic, and SURROGATES is part of this tradition, but it also includes far more. It provides seeds for reflection to those who are able to use the film in a way that offers the critical distance necessary to think about the uncomfortable issues it raises. These include things such as the value and place of simulated and synthetic experiences, virtual and “real world” identities, idealized selves, and cultural conceptions of personal beauty.
For me SURROGATES was both a thrill ride and a venue for serious reflection, akin to a combination of WESTWORLD and BLADE RUNNER for the 21st century. With films like this and DISTRICT 9, the latter half of 2009 has been a good period for quality science fiction. 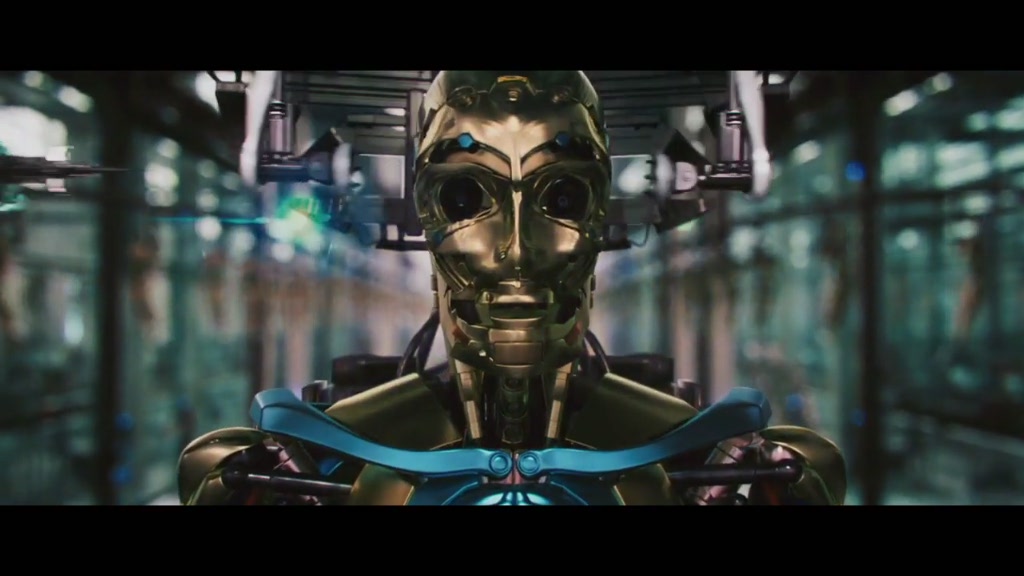