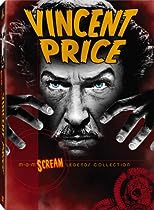 E-Splatter.Com informs us that MGM is planning to release a box set of Vincent Price horror titles on September 11:

This is good news, particularly regarding 1967’s WITCHFINDER GENERAL, which has only ever been available in the U.S. under its alternate title THE CONQUEROR WORM. (The U.S. distributor, American International Pictures, was famous for making films based on Edgar Allan Poe, so they slapped the title of one of his poems onto the British film when they released it here.)
Over two years ago, Phillip Wadilove, one of the film’s producers, announced that MGM had prepared a definitive DVD version that would feature director Michael Reeves’ original cut, the original title, and the original music (which had been changed for previous home video release). Then MGM put its Midnight Movies label on hold, and no more was heart about the WITCHFINDER DVD, until now.
As for the other titles, most of them have been available on home video in various forms for years, but it would be nice to get them all packaged together. Hopefully, they will all be definitive editions. Unfortunately, WITCHFINDER was not the only Vincent Price movie to suffer the indignity of a botched video release. For example, the VHS tape of DR. PHIBES RISES AGAIN substituted an inappropriate piece of background music over the final credits (taken from elsewhere in the movie), omitting the quirky, campy original music, which consisted of Price warbling “Somewhere Over the Rainbow.” (That may not sound so funny when you read it, but there was something deliciously amusing about seeing Price’s demented doctor triumph at the end, and that particularly musical accompaniment was perfectly suited to the scene; deleting it left a flat anti-climax at the end.)