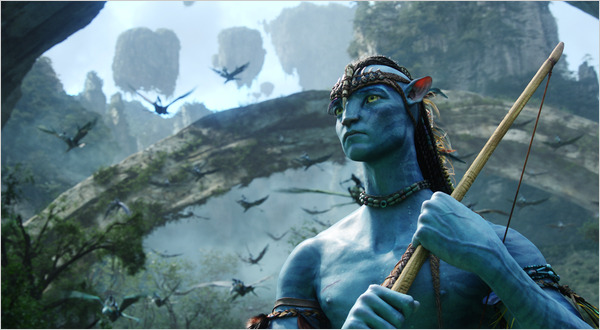 Back in January, I wrote a little editorial (“Conservatives Carp at Avatar“), in which I noted that right-wing “thinkers” and gone off the rails with specious and downright silly arguments about percieved faults with the themes in James Cameron’s blockbuster film. Months later, I see that Cameron has finally fired back, during a press conference to promote his film’s April 22 DVD release (on Earth Day, appropriately enough). According to this article in the NZ Herald, Cameron called Glenn Beck a “madman” and a “f-cking asshole,” to boot.
While some might object to the angry language, I think it’s nice to see Cameron standing up for himself. Too often, well-intentioned liberals restrain themselves, abiding by a self-imposed sense of fair play that is not shared by the other side. And to be honest, Beck is at least a kook, if not a madman.
Unfortunately, the article by Guy Adams frames the story as a temperamental director lashing out against his critics, without addressing the merits of the arguments. Instead, Adams tries to present Cameron as having been assailed from all sides of the political spectrum, which necessitates identifying the New York Times’ David Brooks as being “on the left” – which is, frankly, a ridiculous assertion to make about a Bush apologist. (I guess the fact that Brooks smiles a lot instead of breathing fire, is what makes him pass for left-wing in Adams’s view.)
After finishing with Beck, Cameron remained in fine form as he moved on to global warming skeptics:

He declared his desire to “call those deniers out into the street at high noon and shoot it out with those boneheads,” before reflecting that his best efforts at persuasion would be futile because such people “have got their head so deeply up their ass I’m not sure they could hear me.”
“I didn’t make this movie with these strong environmental anti-war themes in it to make friends on the right, you know…”