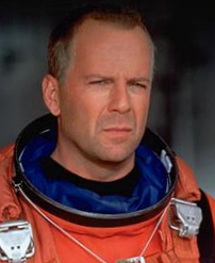 Cinematical reports in news from Cannes that Bruce Willis (ARMAGGEDON) has joined the cast of the SF-Action time travel flim LOOPER.
He’ll apparently play a older version of the character that Joseph Gordon-Levitt (3rd ROCK FROM THE SUN)
will portray, as the film takes place in at least two time periods, separated by decades.
The reported plot sounds interesting; future crimminals send their victims back in time, before time travel is invented. Their hirelings, “Loopers”, kill them, and dispose of the bodies of people who technically don’t exist yet.
Of course, something goes wrong with the set-up, leading hopefully to action and adventure.
Are there TIMECOPS involved, as well as Time Crooks ?
Rian Johnson (THE BROTHERS BLOOM, in which Gordon-Levitt also appeared) directs.