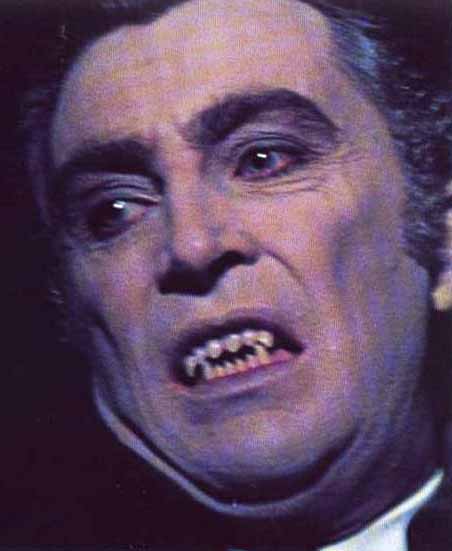 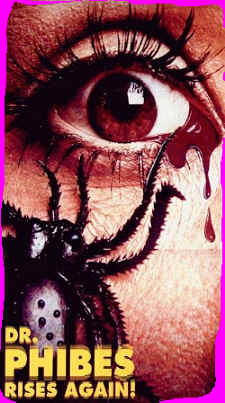 DR. PHIBES RISES AGAIN, Quarry’s first opportunity to co-star opposite Price, is even more overtly campy, but Price’s Dr. Phibes gets all the humor, while Quarry, as his adversary, plays the straight man. The important thing is that Quarry holds his own as a worthy antagonist, proving that he could have aquired the stature (given proper handling) to assume Vincent Price’s mantel.
Unfortunately, Quarry role as potential usurper destroyed any chance for a friendship with the older actor. “An English publicist came up to him and asked, ‘How do you feel about Mr. Quarry coming in as your replacement?’ Vincent told me what had happened; he wasn’t happy about it. It was as if I was a ‘threat’ to his career – to this man with this long, distinguished career that nobody could repalce. After that happened, Vincent was never the same. That made a rift between us. I never some him socially after that, not ever.”
Quarry’s next appearance with Price was in MADHOUSE, which was also the last film Price made with AIP. Although far from a satisfying effort, the film once again showcases Quarry’s talent for delivering disdainful, mocking dialogue. If the results were enjoyable, Quarry insisted it was not because of the script, which he termed “crap.”
Quarry explained, “Originally, I was to play the role of Peter Cushing, but age-wise that didn’t work out, so they manufactured a part for me to play. It was nothing, and the dialogue was unbelievable. So I would change the dialogue around so it was speakble, and then leave the last line – the cue line – in. They never knew what hit them. At least it gave me something to play.”
Completed in 1974, MADHOUSE was barely released, and it did nothing to further Quarry’s career. With Vincent Price’s contract up, horror was not the same at AIP, especially after James Nicholson parted from the company to produce THE LEGEND OF HELL HOUSE, leaving Sam Arkoff in sole charge.
“Once Nicholson and [business manager Paul Zimmerman] left, I was just a piece of meat on a rack, to be used,” said Quarry. “I was under contract, but it was the beginning of the end of AIP – though it lingered on, doing one ghastly film after another. It was like everybody pulled the plug, and the ark sank – or the Arkoff sank, I should have said. That was the end of the horror cycle. After that came the black exploitation pictures.”
Still under contract, Quarry found himself cast in SUGAR HILL, a weird combination of horror and blaxploitation.  “If Sam went out and had his cleaning lady write a movie, it coldn’t have been any worse than this piece of junk they dumped on me. And everything was judged by Mrs. Arkoff, who sat home and ate chocoaltes and read paperbacks all her life.”
Quarry plays a cut-throat mobster who rubs out the owner of a night club he wants to take over, but the dead owner’s girlfriend uses voodoo to turn the tables. The actor brings his patented superscilious disdain to the dialogue.
Casting a white actor trying to take over a black man’s business lent a racist vibe to the proceedings (at one point Quarry slurs the word “negro” when addressing a black underling so that it almost sounds like “nigger”). The role had apparently been intended for a black actor, but Arkoff wanted to get his money’s worth out of Quarry and no other project was available.
“Sam [Arkoff] would have you do anything rather than pay you and not play you,” explained Quarry, whose pay-or-play contract guaranteed him a salary whether or not he appeared in a film for AIP that year.
SUGAR HILL was Quarry’s swan song with AIP. He dipped low on the radar for several years, and the rest of his career consisted of gueast appearances on TV shows and roles in low-budget horror films, usually direct-to-video. His last completed credit was on FUGITIVE MIND, directed by Fred Olen Ray, whose cast also included such genre names as Heather Langenkamp (A NIGHTMARE ON ELM STREET), David Hedison (THE FLY, VOYAGE TO THE BOTTOM OF THE SEA), and Ian Ogilvy (WITCHFINDER GENERAL, a.k.a. THE CONQUEROR WORM).
The actor had been in declining health since moving to the Motion Picture Country Home and Hospital last year. At that time, we conducted Robert Quarry Appreciation Week here at Cinefantastique Online, which provided an opportunity for me to offer a few personal recollections that seem appropriate in the context of this obituary:

I”ve been lucky enough to meet Quarry a few times. The first was when I interviewed him for the cover story on Vincent Price in the January 1989 issue of Cinefantastique (Volume 19, Numbers 1 & 2). Over the phone, the actor expressed some reservations about rehashing old news, but ultimately he agreed to meet with me, and he gave a hilarious interview in which no punches were pulled and no insult went un-uttered. Although understandably disappointed that his career did not turn out as it should have, he did not strike me as particularly bitter while dishing dirt; he simply refused to sugar-coat the truth, and he didn’t stand in such reverent awe of people that he regarded them as hallowed icon not to be impugned under any circumstances.
Later, I happened to run into him outside the Vista Theatre in Hollywood (where Sunset and Hollywood Blvd meet), where Luc Besson’s THE BIG BLUE was playing. He recognized me, and we chatted about how the Price article. He was happy with the way it turned out, because it included both his positive and negative comments. I recall that he also like the Besson film, although it was a rather vague and pseudo-mystical piece – the kind of thing that might appeal to a (then) young cineaste like me but not, I thought, to an actor with an appreciation for in-depth characters and insightful drama.
The last time I saw Quarry was in 2004, when the American Cinematheque hosted a double bill of the two YORGA films, with Tim Sullivan (2001 MANAICS) and Frank Darabont (THE MIST) interviewing the actor in between. He told the old stories again, with his usual gusto, and afterwards I finally got him to sign a copy of the CFQ issue with the Price cover story.

Quarry had a sharp – one might say “acid” – tongue, but he put it in the service of being a great raconteur, regaling listeners with outrageous behind-the-scenes tales, and to be fair, he was not adverse to taking himself down a peg or two. I always thought he deserved better from the industry than he got. In his later years, it seemed as if only low-budget filmmakers like Fred Olen Ray would employ him. I could understand that Quarry did not have the stature that would land him in mega-million dollar Hollywood productions, but you have to wonder why film-buffs-turned-filmmakers like Joe Dante and Quentin Tarantino never gave the man the comeback roll he deserved. (I don’t want to trash Tarantino here: I just wish he had done for Quarry what he did for Robert Forster in JACKIE BROWN.)
Looking back on the role that brought him cult fame, in 2004 Quarry said, “I enjoyed playing Yorga. The fun of making movies is the fun of getting outside yourself. I had been playing heavies all my life, but they were more real – just with or without a mustache. So it was fun to use some of the — what I hope were — skills I had developed by this time.”
Quarry’s hope was well founded. He displayed impressive skills in the handful of films that allowed him to shine in the horror genre. Given more and bigger opportunities, he could have ranked alongside Price, Lee, and Cushing as part of the next generation of horror stars that replaced Lon Chaney, Boris Karloff, Bela Lugosi, and Chaney Jr. And that is why I will always think of Quarry as the Greatest Horror Star Who Never Was.

2 Replies to “Sense of Wonder: Robert Quarry – The Horror Star Who Never Was”