Through the magic of Fathom, the entertainment divisoin of National CineMedia, Micheal J. Nelson, Kevin Murphy, and Bill Corbett will be “appearing” in theatres around the country on August 20, as they provide a live Rifftrax accompaniment to Edward D. Wood’s PLAN 9 FROM OUTER SPACE – the film widely (if erroneously) regarded as the “Worst Movie Ever Made.” (Which is not to say it’s any good – it’s terrible; it’s just that there are even worse films out there.) The film, along with the live Rifftrax performance, will be beamed in high-definition to theatres at 8:00pm Eastern Time, 7:00pm Central Time, and 6:00pm Mountain Time; the performance will be tape delayed until 8:00pm for theatres on the Pacific Coast. 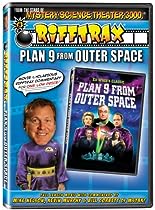 The event, which also includes a short subject, will feature the colorized version of PLAN 9, which was released by Legend films on DVD in 2006. Last month, Legend included the colorized PLAN 9 as one of ten Rifftrax DVD releases, featuring caustic commentary by  by the former stars of MYSTERY SCIENCE THEATER 3000. Many more Rifftrax commentaries are availble for download at the group’s official website; selling them separately bypasses the trouble of securing the rights to release films on disc.(Read an interview with Murphy here on the subject here.)
In case you are unfamiliar with Fathom, the company provides limited-run entertainment (one or two nights) to movie theatres, often live events such as sports, concerts, and opera; sometimes the present premieres of cult science fiction, horror, and anime movies that otherwise would not be seen in U.S. theatres.