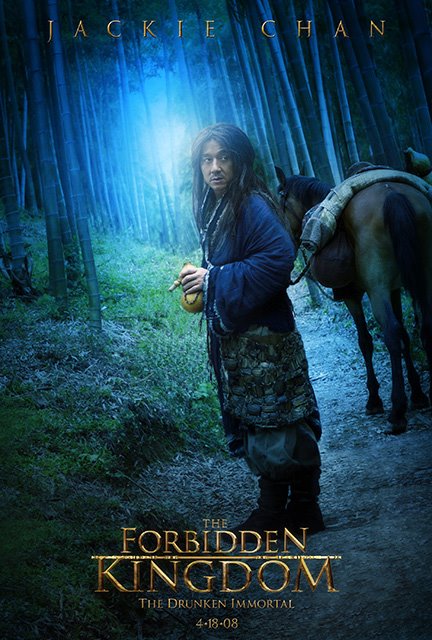 It may not be impossible, but it is certainly difficult to think of a film more weighted down with expectations – both good and bad – than this Hong Kong-style martial arts fantasy. Most obviously, it represents the first on-screen pairing of Jackie Chan and Jet Li – which makes it an automatic must-see movie, while simultaneously setting itself up to disappoint (can it possibly live up to the potential?). Even more potential pitfalls lie in the fact that it is an Americanization of traditional Chinese legends, raising concerns about Hollywood’s penchant for homogenizing material culled from other cultures. In other words, THE FORBIDDEN KINGDOM could be either a thrill-filled hit or an epic disaster. In the end, it is not quite either, but despite falling prey to some of the anticipate problems, it ultimately emerges victorious, perhaps wobbling a bit, but only in the giddy manner of the drunken master played by Chan.
The film launches with a scene of the Monkey King (a legendary Chinese figure, here played by Li) defeating some of the Jade Emperor’s warriors on a mountain top, immediately establishing that the patented Woo-ping Yuen stunt choreography (complete with wire-work that makes the characters seem to fly) is up to standards. A segue implies that the sequence is a dream in the head of an American teen named Jason (Michael Angarano), a sort of Karate Kid for the new millennium, who is obsessed with old kung fu movies starring Bruce Lee – and even more obscure titles, unknown to the average American viewer.  His initial geeky blandness is so overdone that FORBIDDEN KINGDOM starts to resemble an afternoon special aimed at junior high school kids.
Jason is friends with Old Hop, owner of a Chinese pawn shop, who sells him DVDs of movies that Hop regards with contempt. If you don’t look close, you won’t realize that Old Hop is played, beneath layers of old age makeup, by Jackie Chan. This accomplishes two things: It shows us Chan attempting an actual acting role (as opposed to merely playing himself, which he does quite well), and it lays the first yellow brick in the road that will lead the film as much into the land of Oz as into Chinese mythology.
This is an American film, so of course there are some one-dimensional thugs who terrorize our Jason, forcing him to act as a decoy when they rob Old Hop’s store. As fate would have it, the store contains an ancient spear that once belonged to the Monkey King. Jason grabs it and runs up on the roof, where the thugs confront him, warning him to keep silent after they shoot Old Hop. Jason is magically dragged off the roof and falls – not to his death but into an ancient Chinese fantasy land, populated by immortals and magical figures, where he soon finds himself on a quest to return the weapon to its rightful owner. He is aided by a garrulous “Drunken Master” (Chan again, the first of several actors in dual roles). Later, they are joined by a Silent Monk (Jet Li again), who steals the spear. There is also the beautiful Golden Sparrow (Yifei Liu), who wants revenge against the Jade Warrior (Colin Chou), who killed her parents. The Jade Warrior has his own agents on his side, including a White-Haired Witch (Bing Bing Li), who cracks a mean whip.
Essentially, this is a coming-of-age story, with the nerdy Jason rising to the occasion, putting aside his movie-inspired kung fu fantasies and learning not only how to kick ass but also how to comport himself with honor and dignity. Although the story itself borders on the trite, it is cleverly used as a path to lure American viewers into the Chinese fantasy land where most of the spectacular action takes place.
Once in the mythical land of the “Forbidden Kingdom,” a sense of magic and adventure infuses the proceedings, lifting the film above its mundane beginning. Jason becomes the eye of the storm, the quiet, almost blank character around whom several whirling dervishes spin like mad, in order to distract us from the vacuum at the film’s center. Fortunately, as Jason grows and buffs out under the tutelage of the two martial arts masters, Angarano seems to take on more definition; the attempt to turn his character into a lean, mean fighting machine, instead of provoking laughter (as one might expect), actually takes him a step toward being a convincing character. (And the film wisely avoids overstepping here: the climax has Jason joined by lots of allies, taking the pressure off of him to perform in battle.) 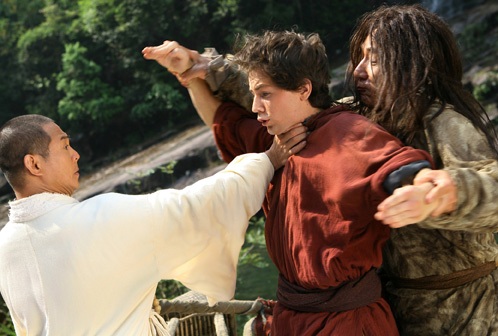 If the lead character needs propping up, fortunately the supporting cast is extremely strong. Although screenwriter John Fusco claims he did not write the characters with the stars in mind, both Chan and Li fill out roles that might as well have been tailor made for them. Li is whimsical and amusing as the Monkey King, a showy non-dialogue role that allows for lots of tongue-in-cheek antics mixed with spectacular sword play. As the Silent Monk he is perhaps even more impressive; filling the screen with his mere presence, he registers strongly even while saying little.
Chan revives the “drunken master” persona that helped make him an international star. He is totally comfortable in the role, but what is truly impressive is that it does require more acting from him than usual. Despite his martial arts skills, Chan has always been less of an action star or an actor than the modern equivalent of a silent comedian, yet here he plays a garrulous character who is not only funny but also sometimes sincere. (Chan supposedly objected to the extensive dialogue, expressing a preference for the Silent Monk role; fortunately, he rose to the challenge, delivering a performance that will be familiar to his fans without being a retread. Let’s say it’s an extension of his familiar persona.)
Rounding out the quartet of heroes is the lovely Yifei Liu as Golden Sparrow, the young woman seeking to avenge her parents. Like much on view in FORBIDDEN KINGDOM, her role will seem familiar to fans of Hong Kong fantasy films (she’s delicate and beautiful, but she kicks ass as well as any of the men), but in this case familiarity does not breed contempt. Instead, it’s refreshing fun to see her play the same old notes in her own style.
On the villains’ side, Colin Chou is the classic man you love to hate – all regal charm laced with subdued menace. Avoiding scenary chewing theatrics, he puts the character across with body language and a carefully modulated voice. (Of all the Asian actors, he gives the strongest performance on a pure acting level, and if anyone ever wants to remake LEGEND OF THE SEVEN GOLDEN VAMPIRES, he should definitely get the Dracula role.)
As Chou’s chief agent, Bing Bing Li might seem to possess a face too young and beautiful to convey much menace as the White-Haired Witch, but she is totally convincing when she leaps into action and even more so when she is standing still: she knows how to strike a pose that tells you everything you need to know about her character’s intentions.
Fusco’s script is filled subplots that give the characters their own agendas, but he manages to tie the threads together without getting them tangled. Besides the central quest, there is also Golden Sparrow’s revenge, and one of the heroes is mortally wounded and can only be saved by a magical elixir – which the Jade Warlord has promised to the White-Haired Witch. All of this culminates in wild battle, where everyone’s karma gets leveled (unlike say, ONCE UPON A TIME IN MEXICO, which lost track of who should be shooting whom). The only minor misstep stems from the eager anticipation the White-Haired Witch conveys early in the film regarding Golden Sparrow; the moment perfectly sets up a cat-fight confrontation that is short-circuited in the finale, because there are so many different fights going on that the combatants seem to change partners almost as if in a square dance.
Unfortunately, the film cannot quite end there. Like Dorothy leaving Oz, Jason has to return to this old life. In his case, however, he cannot simply wake up in his room with Aunty Em; he has to confront those bullies who beat him up. The predictable payback scene is not helped by Michael Angarano’s unconvincing mad face when he finally decides to utilize all those martial arts skills he learned over the rainbow, but at least his character makes a token attempt at trying to talk his way out of a fight. And there is a nice grace note, with the surprise appearance of yet another character who corresponds to someone in the Forbidden Kingdom.
Of course, the real must-see moment is the fight between Li and Chan. It is perhaps not quite the most spectacular scene of its kind every filmed, but it does feature the amazing choreography one expects from Woo-ping Yuen, and more important, it has some personality to it, capturing the contrasting styles of the two stars: the affability of Chan versus the stoicism of Li. The purists – especially those who despise wire-work because it is too fanciful – may object, but everyone else should be satisfied.
Director Rob Minkoff (whose last film was Disney’s dreadful THE HAUNTED MANSION in 2003) captures much of the appeal of the Hong Kong fantasy genre, and he serves it up in a way that is palatable to an American audience. Despite the PG-13 rating, there are times when he seems to think he is still directing a Disney kiddie movie instead of a more mature mythological adventure, and as if that were not a big enough yardstick, the WIZARD OF OZ parallels provide more reason to find the film lacking. (When the White-Haired – instead of green-faced – Witch confronts the quartet of one young woman and three men in a cherry orchard, you can’t help trying to match the characters: Golden Sparrow is Dorothy; Lu Yan is the Cowardly Lion; the Silent Monk is the Tin Man; and Jason is…Toto?) 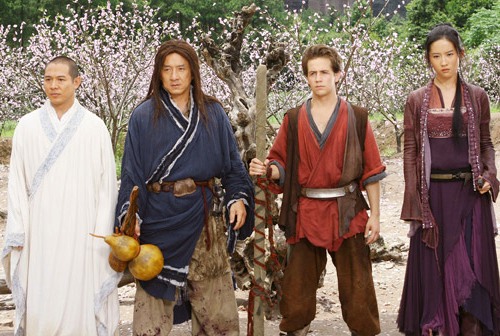 Still, a movie can fall short of a classic and still be exhilerating fun. THE FORBIDDEN KINGDOM’s saving grace is its good natured eagerness to please, coupled with a decent amount of ambition. It’s not really sophisticated, but it’s not just a mindless bastardization of the films it emulates. It may lack the purity and/or originality of HERO and A CHINESE GHOST STORY. It definitely lacks the rapturous romance of THE BRIDE WITH WHITE HAIR; CROUCHING TIGER, HIDDEN DRAGON; and HOUSE OF FLYING DAGGERS. Yet, if you’re willing to make allowances for the necessity of appealing to a broad American audience, FORBIDDEN KINGDOM works quite well as a crowd-pleaser. Connoisseurs may insist that their favorite cocktail be served only in a traditional Chinese container, but everyone else should enjoy tasting the same ingredients remixed in an American tumbler.
THE FORBIDDEN KINGDOM (2007). Directed by Rob Minkoff. Written by John Fusco. Cast: Jackie Chan, Jet Li, Michael Angarano, Colin Chou, Yifei Liu, Bing Bing Li, Morgan Benoit, Deshun Wang.