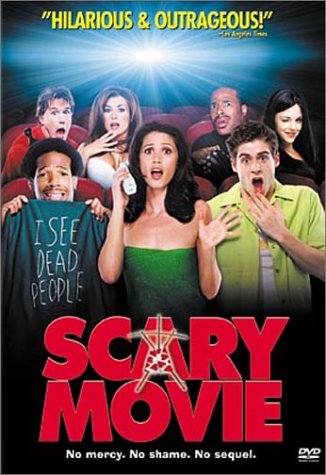 After the SCREAM trilogy ran its course, this spoof was a way to keep the money rolling in at the box office. Since the SCREAM movies, contained a healthy dose of self-referential humor, SCARY MOVIE seemed a bit redundant (it’s easier to make fun of movies that take themselves too seriously), yet it turned out to be a colossal success, selling far more tickets than the film it parodies. Why it was so huge is hard to say, except that SCARY MOVIE works on the level of the Farrelly Brothers’ THERE’S SOMETHING ABOUT MARY: that is, it seems less interested in being amusing than in being outrageous – if by “outrageous” we mean offensive to those viewers who are not part of the target audience. The appeal seems to lie less in laughter than in respect for the filmmakers’ irreverence as viewers sit back and think, “I can’t believe they showed that!”
This attempt to shock is appropriate, considering the genre being spoofed. Horror movies thrive on transgression – on going to far, even beyond the boundaries of conventional good taste. Mysteries-thrillers may adopt a more sophisticated, subtle tone, but horror needs to repel, revolt, and even disgust. The emphasis on spilled blood and torn flesh is a visceral reminder of the carnal foundation of our physical existence, which we try to cloak behind the decorum of polite society. (This explains the recurring image in the British Gothic chillers directed by Terence Fisher, which frequently featured[Dracula, Frankenstein, or the Mummy crashing in through the window of some lavishly appointed Victorian drawing room—decay and death forcibly intruding rudely upon an upper crust society that would prefer to ignore their existence.)
Comedy provides a latitude to go even further than horror would dare. Director and co-writer Keenen Ivory Wayans uses license to kill, taking it to an unbelievable extreme. The result is a spoof that arguably exceeds the somewhat overrated original.

Wayans and his team of writers shoehorn in every crude, offensive, and outright disgusting gag they can imagine, including many that are irrelevant to SCREAM in particular and to horror in general. In fact, SCARY MOVIE stretches the boundary R-rated outrageousness, even surpassing SOMETHING ABOUT MARY. (The most interesting thought about the R-rating is that it allows parents and guardians to bring underage children to see the film – although it’s hard to imagine a family who would enjoy sitting down for a viewing experience filled with pubic hair, a penis, and—literally gallons of—semen.) Too often, the excess grows repetitious (the opening reel features not one but two car accidents that result from a driver distracted by oral sex), but if you can choke back the gag reflex, you have to admit that the subject matter is ample target for parody, and SCARY MOVIE hits the target more often than it misses.
SCARY MOVIE manages to overcome its greatest enemy (finding a way to parody something that was half self-parody to begin with) by reusing the simple strategy that screenwriter Kevin Williamson employed in SCREAM: rehash familiar material and then comment on the obvious familiarity. The result underlines the relatively modest achievement of the original; having the characters acknowledge that they’re in a movie yields better results in an outright farce (which is why it worked so well for Jerry Lewis and, even earlier, for director Frank Tashlin).
The film works best when the Wayans team abandon the scatology tangents and take aim at specifics in the SCREAM franchise. For example, one of SCARY MOVIE’s multiple murderers, upon being upbraided for his weak motive, responds, “Did SCREAM have a plot? Did I KNOW WHAT YOU DID LAST SUMMER make any sense? I don’t think so!” SCARY MOVIE is virtually a remake of those two box office hits; it almost comes close to achieving satirical sophistication by interweaving the two plots and showing that, even when combined, there is still barely enough story for one movie. Along the way, SCARY MOVIE also proves that the “we-covered-up-the-man-we-killed” plot, borrowed from LAST SUMMER, is a stronger motivation than SCREAM could manage (in which the killer’s motivation came across like an afterthought—there had to be some reason for the murders).
Emphasizing the point that SCREAM-writer Williamson had trouble concocting interesting killers and a compelling last-reel revelations, SCARY MOVIE travels far a field of the horror genre, coping its twist ending from THE USUAL SUSPECTS. In a way, this is the best satirical jibe SCARY MOVIE has to offer, because (let’s face it) SUSPECTS makes no more sense than the average teen-horror flick featuring an unkillable psycho; despite an Oscar for Best Screenplay, SUSPECTS simply provides a higher-caliber, more entertaining form of nonsense.
This is SCARY MOVIE’s only fleeting brush with sophistication, and it arrives in the final reel, long after those likely to understand the reference have stormed out, while those remaining are still chortling over snot and silicone implants. (Perhaps it’s a sort of reward to the parents nagged into taking their six-year-olds to see the film.) As revolting as some of this is, we should remember that horror is about transgressing boundaries, often those associated with sex and violence. SCARY MOVIE exploits the same raw material that fuels the horror genre, and the laughs are sprinkled with almost as many gasps of disgust (along with an occasional glimmer of genuine suspense) that many “serious” horror films elicit. As Steve Martin said, “Comedy is not pretty.” But in this case, it is undeniably effective.
SCARY MOVIE (2000). Directed Keenen Ivory Wayans. Written by Shawn Wyans & Marlon Wayans & Buddy Johnson & Phil Beauman and Jason Friedberg & Aaron Seltzer. Cast: Carmen Electra, Dave Sheridan, Frank B. Moore, Anna Faris, Jon Abrahams, Regina Hall, Marlon Wayans, Shannon Elizabeth.
RELATED ARTICLES: Scary Movie 4