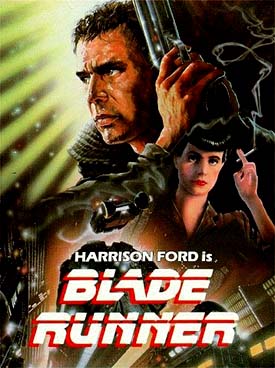 “There are certain moments in movies where the background can be as important as the actor,” proclaims director Ridley Scott. “The design of a film is the script.” Scott is a supreme visual stylist with a gift for design unequalled among contemporary directors, but he’s wrong. Design is a vital element, especially if the audience is to accept anyone’s physically imposing vision of the future, but staggering technical virtuosity – in and of itself – can never replace character and story values. And this realization points out Scott’s fatal flaw.
BLADE RUNNER proffers a thousand-course feast for the eyes, but only bread and water for the mind and spirit. Never before has the future looked like this: amazingly detailed; persuasively real (most of the time), in an everyday, lived-in way; drenched with rich, contributive atmospherics; tinged with vivid and nightmarish, yet oddly compelling, shadings.

EDITOR’S NOTE: For comparison purposes, here are the two capsule comments that ran in the BLADE RUNNER double issue:

A poignant, bitterly flawed poem. There are several scenes so moving in their spiriitual humility that they verge on the hurtful, and ths accomplishment (coupled with the most convincingly detailed future world ever commited to film) is too rare to admire grudgingly. It’s not perfect – it’s overtextured, erratically structured, and a little too heavy on the Vangelis score. Harrison Ford’s monotone narration – in which he sounds more bored than jaded, more fed-up than hard-boiled – is the worst problem.
– Tim Lucas

A true original. Even though it has no story to speak of, it wins hands down on its visual style. Some of the images are staggering. I got the feeling I was watching a true science fiction films for the first time. The production design is supert, all ’40s costumes, Scott’s stock-in-trade smoky atmosphere, and credible depiction of a future L.A. Also features the best Douglas Trumbull special effects yet.
– Alan Jones