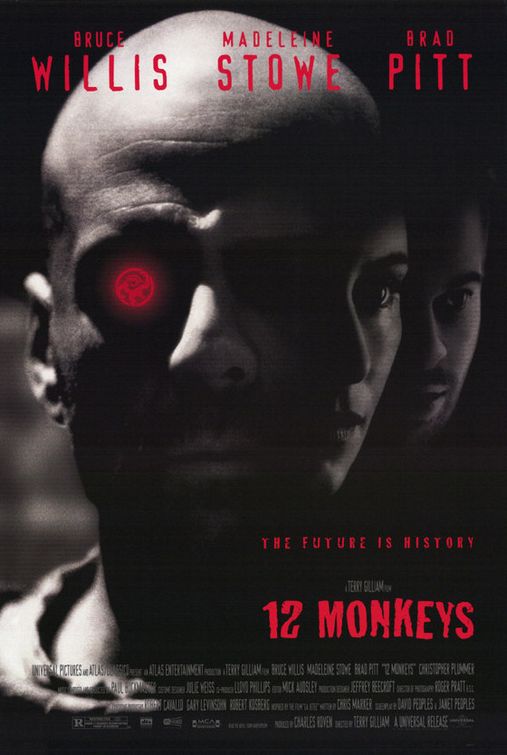 This is feature-length remake of LA JETEE, the short-subject masterpiece by Chris Marker that portrayed time travel as a kind of moebius strips folding back on itself. The original short was a remarkable piece of film-making with a style inextricably linked to its content. Perhaps LA JETEE’s auteur, Chris Marker, was simply using techniques from his documentary background (the story is told in a series of still frames, with a voice-over narrating the events); however, those frozen moments of time cannot help but enhance a story about the nature of time and returning to specific moments over and over again.
In retrospect, there was never any chance that 12 MONKEYS would turn out to be a literal remake; instead, it is a re-imagining of the basic premise, dramatized in conventional dramatic terms. Needless to say, director Terry Gilliam films his actors at twenty-four frames per second, not in still photographs. Nevertheless, 12 MONKEYS is not simply a Hollywood mainstreaming of a European art film. In fact, this independently financed effort was probably the most difficult and challenging film released by a major studio (Universal Pictures) in 1995.
The new script (working from a script by David Web Peoples and Lisa Peoples) retains and even amplifies the ambiguity of whether its protagonist, Cole (Bruce Willis) is in fact from the future, expanding the plot to feature length by including new material involving a psychiatrist (Madeline Stowe) trying to convince him that he is delusional. The story is intentionally told from these two contrasting viewpoints, thus distancing us from Cole: instead of sharing his subjective experience of being “mentally divergent” (i.e., existing in two separate times), we often see him as a deluded and possibly dangerous madman.

Also, his quest is not to prevent the plague (“How can I prevent what already happened?” he asks, having come from the post-plague future) but to secure an un-mutated sample of the virus that depopulates the planet, in the hope of scientists from his era can use it to save future generations. This lends an air of fatality to the proceedings, which (in a scene presented in a theatre showing a Hitchcock double bill of VERTIGO and THE BIRDS) are compared to reaching an old film: the vents witnessed do not change; they simply seem different because the viewer has changed.
The result is a strangely elegiac doomsday scenario, haunting and hopeless, yet somehow beautiful. Gilliam brings his patented dense visual texture to the futuristic underworld, and contrasts it with a few vivid images of the planet’s surface, no longer populated by humanity (no great loss, in the film’s scheme of things).
However, these sequences are but a fraction of the film, which deals mostly with Cole’s quest in the 1990s. Location shooting in Baltimore and Philadelphia conveys a world stricken with entropy even before by decimated by an artificially engineered biological plague. It’s an entropy that infects not just architecture or physical health but mental outlook as well. The world is already crumbling, because we no longer know how to create meaning. Ultimately, the question of whether Cole is a time traveler or a madman is resolved—but abandoned. He may be telling the truth, but that doesn’t help bring any greater understanding when the experience of reality has broken down past the point of creating order out of chaos. In the most telling scene, Stowe’s Dr. Railly laments that psychiatry is the new religion, telling us what’s real and what’s not, and she has lost her faith. Authority figures like her boss (played by Frank Gorshin) betray curious personality ticks hinting that they too are on the edge of madness, while seemingly sane scientists like Dr. Goines (Christopher Plummer) create deadly biological weapons in the laboratory that are only a security measure away from being unleashed upon an unsuspecting world.
The only people left who believe anything with conviction are the crazy ones, like the doctor’s son, Jeffrey Goines (Brad Pitt, in an Oscar-nominated performance), leader of the self-styled Army of Twelve Monkeys, a fringe group of suspected eco-terrorists, whose grand gesture of civil disobedience is releasing incarcerated animals from a zoo. Goines’ raving diatribes provide a clever way for the screenwriters to take swipes at modern, dehumanizing consumer culture without sounding like ham-handed preachers; after all, they put their message into the mouth of a madman, so you cannot object if it sounds strident and heavy-handed.
Pitt’s presence serves as s useful link to SEVEN, 1995’s other dark and twist view of a world gone mad. If that grim thriller was about the breakdown of “meta-narratives” (as the late film critic Patricia Moir observed in Cinefantastique magazine) to the point where a serial killer could use the Seven Deadly Sins as a model for a bloody work of art meant to shock the conscience of the modern world, then 12 MONKEYS portrays a world in which methods of understanding have atrophied to the point where a lone man can justify unleashing a plague that will destroy humanity. In this case, it is not the meek who will inherit the Earth; it is the animals we leave behind.

The Special Edition DVD released in 2005 recreates the bonus features of the old Universal Signature Collection Laserdisc: a theatrical trailer, a photo archive, and an audio commentary from producer Chuck Roven and director Terry Gilliam; and the making-of documentary “The Hamster Factor.”
The photo archive contains literally hundreds of images, separated into separate categories: artwork (consisting of logos and designs for costumes and sets); location photos; a storyboard sequence; production photos of the leading cast members with the director and/or producer; costume diaries (polaroids taken of Willis in costume for continuity purposes); and poster concepts (including one from France with the film re-titled ARMY OF THE TWELVE MONKEYS).
“The Hamster Factor” is several cuts about the usual behind-the-scenes documentaries, which are usually little more than extended commercials for the film. This one gives a fairly in-depth look at the trials and tribulations behind the making of TWELVE MONKEYS. You’ll see the otherwise cooperative Bruce Willis annoyed that his character is going to be knocked down by a kick from a woman; he insists she should at least use a weapon. You’ll see the crew stand around doing nothing while producer Charles Roven and director Terry Gilliam argue somewhere, unseen, behind the scenes. And you’ll see Gilliam’s excitement over the audience reaction at the test screening (which seems to go extremely well) turn to baffled confusion when the comment cards tell a different story (viewers seem to think the film is too difficult and doubt whether they will recommend it to their friends).
The audio commentary by Roven and Gilliam is very amusing and informative, even if some of it repeats information available in the “Hamster Factor” documentary on the disc. Unfortunately, both men have so much to say — and say it at such great length — that they frequently end up ignoring whole sequences because they are still explicating details of previous scenes! On some occasions they realize their mistake and discuss shots that have passed by, forcing you to rewind if you want to go back and see what they were talking about. Toward the end, the two become involved in a long conversation about the problems they encountered during the preview process, letting much footage pass by with only minimal scene-specific commentary.
Perhaps the biggest omission is the interrogation chair that Willis occupies during his scenes in the future. Although the prop itself is discussed, neither Gilliam nor Roven mentions the lawsuit that resulted from it, when an artist claimed that it bore a suspicious resemblance to a piece of his own work.
Some of their more interesting comments include Gilliam’s recollection that he and Brad Pitt faked an on-set fight during April Fool’s Day, and Roven’s statement regarding Gilliam as a director: “It’s not okay if it’s right and simple; it’s got to be right and difficult.”
Gilliam gets his revenge against his producer by gently chiding Roven for his attempts to use the music score to emphasize the subdued romantic attraction between Dr. Railly and Cole: “You look at Spielberg movies and a lot of other movies,” says Gilliam, “everything is telegraphed, and you’re told what to feel by the music all the time.”
Gilliam (who is much more articulate than his British compatriots in Monty Python ever admitted) too often denies the science-fiction genre lable for the film, instead insisting that it is a European-style art film that doesn’t do all the work for the viewer. He doesn’t seem to realize that the two categories are not mutually exclusive: TWELVE MONKEYS is science fiction, and it is an art film that makes demands on its viewers. 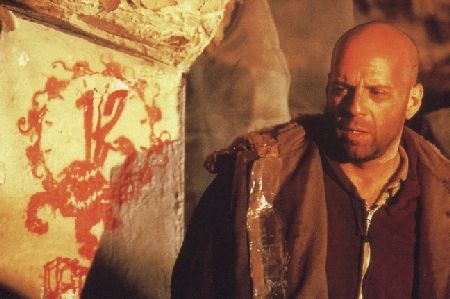