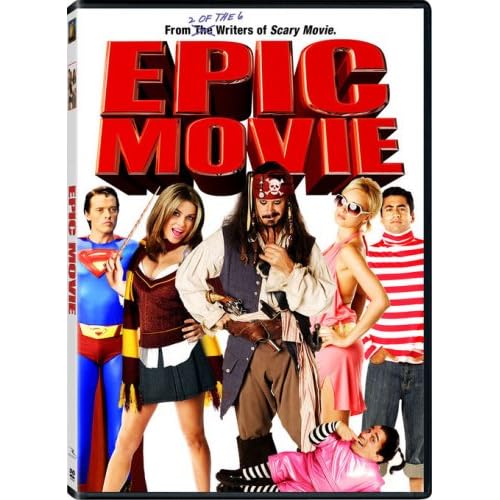 This is an almost unimaginably unfunny piece of drek that makes even the wan SCARY MOVIE 4 look like a comic gem in comparison. With its shotgun-style approach, firing off scatter-shot rounds at anything and everything in its path, it’s absolutely amazing that, just through sheer luck, the film does not hit the target more often. The result is an absolutely dreadful tedium, a fragmented collage of scenes yanked from other movies and just barely tied together with feeble jokes, which leaves you debating which is more painful: the dreary set-ups to the punch lines or the punch lines themselves?
A big part of the problem is that the film is so unfocused. AIRPLANE – the big grand-daddy of this kind of spoof – benefited from using the plot of an actual movie (ZERO HOUR), and the first SCARY MOVIE had the SCREAM franchise as its model. But EPIC MOVIE hasn’t really got anything to hold it together: the film is most decidedly not an epic, nor even a spoof of one; it is simply a grab bag of anything and everything under the sun, lumped together whether it fits or not. (Are you old enough to remember the song “Kung Fu Fighting”? You’ll wish you weren’t – in fact, you’ll wish you’d never heard it at all – after seeing it used in a desperate attempt to inject some humor into the ultra-lame final battle sequence.)

Parody works best when it remains closest to its target; the scenes should be familiar – just bent far enough to expose their absurdity. EPIC MOVIE fails pretty miserably in this regard, relying instead on a steady stream of piss and fart jokes that have nothing to do with spoofing the excesses of the epic genre. Without a clear target or a unifying theme, the film is forced to work on a joke-by-joke basis, and much of the humor is supposed to come from seeing the unlikely series of spoofs shoe-horned into the same movie.
Along the way, writer-directors Friedberg and Seltzer forgot one thing: the spoofs are supposed to be funny. Instead, the resort to the old, misguided aesthetic first perpetrated by the lamentable SATURDAY NIGHT LIVE rip-off known as FRIDAYS: the very fact that a familiar scene is recreated in a “comedy” is, in and of itself, “funny” – whether or not any actual joke is involved.
Unfortunately, neither Friedberg nor Seltzer know how to lampoon their targets. Unable or unwilling to aim at the common tropes of movie epics (lengthy running time, ponderous tone, melodramatic story-lines, archetypal characterizations), they manage a few easy hits against the likes of Paris Hilton, but even relatively easy subjects like THE DA VINCI CODE (with its mass of nonsense so deserving of being rake over the coals), the best they can come up with is “So Lame the Hair of Tom” (a reference to Tom Hanks ridiculous hair style). The one time they score a genuine hit is the all-too-typical “I’ll hold them off while you escape” scene – which generates a handful of guffaws as the brave comrade left behind abruptly changes his tune.
After awhile, one begins to suspect that the filmmakers don’t really know what they’re doing. The Zucker-Abrahams team obviously knew AIRPORT-type disaster movies inside and out when they made AIRPLANE; the Wayans brothers just as clearly had sat through the SCREAM films. But EPIC MOVIE looks as if it were put together by people who had sat through the trailers for CHRONICLES OF NARNIA, CHARLIE AND THE CHOCOLATE FACTORY, SUPERMAN RETURNS, X-MEN, PIRATES OF THE CARIBBEAN, etc. In fact, they seem so disinterested in their subject matter that they resort to a series of television spoofs (e.g., PUNK’D) just to pad the film out to feature length and, on top of that, toss in rap and/or break dancing at regular intervals.
It doesn’t help that the leads look like acting students putting on an amateur performance. The supporting cast is not much better, except for Crispen Glover, who is so dead-on perfect as the Willy Wonka clone that you could imagine him playing the role in the real movie. In a strange tribute to actor Johnny Depp (who played Wonka in the 2005 Tim Burton film), EPIC MOVIE has not one but two parodies of his performances, the second being Darrell Hammond’s turn as “Captain Jack Swallows.” Hammond manages such a perfect duplication of Depp that for a second you almost mistake it for the real thing; unfortunately, it almost immediately becomes apparent that Depp’s original was so far over-the-top that there’s no way for Hammond to push it any further for comic effect. Not for the first time, it becomes clear that parody works best when lampooning material that took itself too seriously.
In the end, the only thing “epic” about EPIC MOVIE is the closing credits, which seem nearly as long as LORD OF THE RINGS (which somehow avoids being molested in this film).
Fortunately, the string of names are twice interrupted by bits leftover from elsewhere in the movie. They’re not great, nor even very good, but they are not quite as lame as the rest of the film. The first is a musical number with Wonka and the Oompa Loompas. As for the second…well, if you’re raking your memory after seeing “Mel Gibson look-alike” in the cast list, save yourself the trouble; the reason you don’t remember the character is that he hasn’t appeared yet.
With EPIC MOVIE, the spoof genre has sunk to the level of the films it attempts to spoof: worn-out, depleted, overly familiar, pathetically repetitive. In fact, the result is so dire that it is at least as deserving of parody as any of the targets on view here. One can only hope that someone, somewhere, is developing EPIC MOVIE MOVIE. The potential for jokes at the expense of this turkey is enormous.