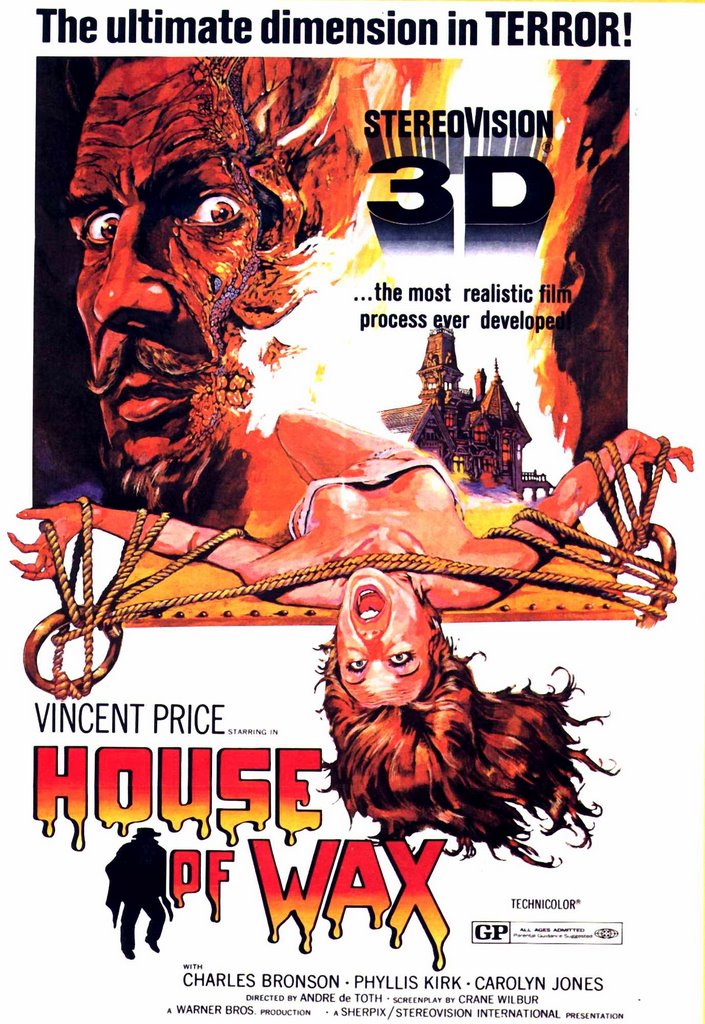 The enduring reputation of this 3-D horror film almost seems designed to illustrate the distinction between a “classic” and a masterpiece. Colorful production values, slick entertainment, and nostalgia earn the former designation; however, HOUSE OF WAX is not quite a masterpiece – its glossy beauty dazzles the eye but tends to undermine the horror. A reasonably close remake of 1933’s MYSTERY IN THE WAX MUSEUM (starring Lionel Atwill), the film is less creaky than its source, but less atmospheric as well, lacking the old-fashioned aura of mystery and suspense that suffuse the original.
On the plus side, Vincent Price delivers a good performance in the starring role, both sympathetic and scary. He etches a moving portrait of his character’s transition: in the beginning he is an optimistic artist, dedicated to creating beauty; after the fire that leaves him crippled, he becomes a cynical purveyor of horrors, pandering to the public’s apetite for shock and sensationalism.
There is a nifty sequence of the leading lady being pursued by a shadowy figure; atypical for the time, she reveals some impressive resourcefulness  (climbing over a balcony to evade her pursuer) and intelligence (taking off her shoes so that the killer cannot hear her footsteps on the cobblestone streets). There is also an extremely effective “unmasking” scene at the climax that stands as one of the great shock moments in horror cinema.
Otherwise, director Andre De Toth relies on stereoscopic visuals to gimmicky thrills, and he occasionally lets scenes run on, including a comic-relief dialogue between Phyllis Kirk and a giggly Carolyn Jones that will have impatient viewers wondering whether they are watching a horror film or a costume-romance.

HOUSE OF WAX is a film that came along at just the right time. Not only was it the first 3-D film from a major studio (Warner Brothers), it was the first horror film shot in the stereoscopic process, and it was one of the few horror films of the period to be shot in color. At a time when traditional Gothic horror was being replaced by low-budget science-fiction, the elaborate production values and 3-D gimmicks made the film a huge success.
The film is historically important because it established Vincent Price as a horror star. Price had previously been a successful character actor who had appeared in a handful of horror films such as THE INVISIBLE MAN RETURNS and THE TOWER OF LONDON (both 1939) and had played suspicious or villainous characters in LAURA (1944) and DRAGONWYCK (1947). Here, he plays Henry Jarrod, a sculptor who goes insane after his business partner burns his wax museum to the ground for the insurance money. The story involves a hideously scarred man who seems to be involved with the mysterious disappearance of several people (including the business partner). The surprise ending comes when, trapped in Jarrod’s clutches, the heroine (Kirk) hits the sculptor in the face, cracking the wax facade to reveal that Jarrod is in fact the deformed killer: no longer able to create wax figures with his own hands, the mad sculptor has resorted to murdering people and “waxing” his victims, who then become displays in his museum. 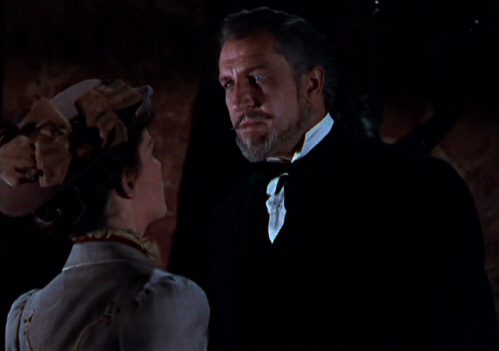 Price’s makeup, a series of pieces applied directly to his face, took three hours, necessitating that the actor arrive at the studio at five o’clock each morning.
Said Price: “It was a great makeup by George Bau, who was one of the great makeup men—who didn’t get any credit for it, because his brother, Gordon Bau, was head of the department at Warner Brothers.” (This was in the day when movie credits frequently listed only department heads, not the people below them who did the actual work.)
Filming was an arduous process. The dual camera rig necessary for 3-D was extremely awkward, limiting camera set-ups and staging. Consequently, the actors had to perform many of their own stunts; for example, in the opening conflagration, Price runs through the burning museum and ducks into a small closet before a balcony collapses down on him. The realism of the scene is breath-taking in its conviction, and the timing of the collapse is split-second suspenseful. You almost feel the flames, and the clarity of image and depth – aided by clever camera placement and staging – clearly reveals that this that it is indeed Price, not a stuntman, running through the burning a mere second away from serious injury.

Ironically, this 3-D extravaganza was directed by Andre de Doth, who had only one eye—which means his vision was limited to two dimensions!
“It’s one of the great Hollywood stories,” Price recalled. “When they wanted a director for [a 3-D] film, they hired a man who couldn’t see 3-D at al! Andre de Toth was a very good director, but he really was the wrong director for 3-D. He’d go to the rushes and say, ‘Why is everybody so excited about this?’ It didn’t mean anything to him. But he made a good picture, a good thriller. He was largely responsible for the success of the picture. The 3-D tricks just happened—there weren’t’ a lot of them. Later on, they threw everything at everybody.”

HOUSE OF WAX was eagerly embraced by movie-goers of its day, earning a spectacular $4.3-million (at 1953 ticket prices).  Over the years, thanks to the presence of Price and to its historical importance as the first 3-D horror film, HOUSE OF WAX has earned a reputation as a classic. However, the film is not held in universally high regard.
Denis Gifford, in A Pictorial History of Horror Movies, complains that 3-D “diminished the horror,” creating a “rounded reality that was curiously unreal. The shocks came not from tangible horror but from a small ball, pin-ponged out of the screen directly at your nose.”

In his book The Horror People, John Brosnan writes:

Full of 3-D gimmicks, THE HOUSE OF WAX isn’t very impressive when seen today. Price gives an adequate performance as the mad sculptor, but in his appearances as the mysterious murderer, a figure all in black, he unfortunately adopted a peculiar pigeon-toed way of walking – with ludicrous results.

The Overlook Film Encyclopedia: Horror calls this “one of the better 3-D films” and credits De Toth with achieving at least “one superb sequence,” in which the murderer pursues Kirk “along gas-lit streets and alleyways, with his cloaked figure towering like an angle of death.”

Although HOUSE OF WAX did not generate a sequel, the box office returns did spawn a brief wave of 3D thrillers, including a sort of unofficial follow up: Vincent Price played a similar role in Columbia Pictures’ THE MAD MAGICIAN (1954), which was written by Crane Wilbur, who had also scripted HOUSE OF WAX.
Another unofficial follow-up is CHAMBER OF HORRORS (1966), which apparently began as a television pilot for a projected series inspired by HOUSE OF WAX. The feature film that resulted (starring Patrick O’Neal as a one-handed maniac known as the “Baltimore Strangler”) has little to do with HOUSE OF WAX, outside of a wax museum setting.
In 2005, Dark Castle (the production company behind the remake of HOUSE ON HAUNTED HILL, another Vincent Price horror film) released a new film entitled HOUSE OF WAX, which took the idea of a murderer turning his victims into wax statues and used it as the basis for a typical teen slasher film.

At the same time that he was offered HOUSE OF WAX, Price also had an opportunity to play the lead in a Broadway play called “My Three Angels.” Unable to accept both offers, Price went with the film role: “I think it would have been very good for me to have done [the play],” Price lamented years later. “It was a real turning point in that I had to make up my mind whether I was going to become a movie star or whether I would go back and continue my career in the theatre. I’ve never known quite which was the right thing to do. I would love to have done the play, but the people who did—it didn’t mean anything to them at all. It was a great hit, but it didn’t help them in their careers. Whereas HOUSE OF WAX changed my life.”
While promoting the film, Vincent Price had his only meeting with aging horror film star Bela Lugosi, who was hired to go on a publicity tour for the film’s release: “We went to Chicago to plug the film, and Bela was along,” Price recalled. “We all wanted to met Bela, who was on the same plane, but he was way off somewhere, and he never showed up at any of the press things. So I really just met him, briefly.”
In a supporting role as Jarrod’s mute servant, an actor by the name of Charles Buchinsky made his screen debut in this film. After a name change, the actor went on to become an international box office star in countless Westerns and cop movies, where he was billed as “Charles Bronson.”

Viewed on home video or at occasional theatrical revivals, HOUSE OF WAX is an interesting museum piece that stands as a fine example of old-fashioned horror film-making. Unfortunately, it is a motion picture that truly suffers on the television screen, without the 3-D element. Watching it in a theatre, with the stereoscopic glasses, is a major revelation: one can get an understanding of the strengths that earned the film its classic reputation; on the big screen, what works is just about big enough to eclipse the weaknesses.
Andre De Toth uses the three-dimensions to put the audience into the film, and the wax museum setting is perfect – you can practically feel the atmosphere of the place, and all those shimmering wax figures seem real enough to come to life.
Of course, the movie is filled with inventive, sometimes gratuitous 3-D gags, including the moment that annoyed Denis Gifford: at one point, a man swats a paddle ball out of the screen while luring passersby into the wax museum like a carnival barker. Later, Igor abruptly rises into the frame and rushes at the hero, creating the momentary illusion that someone in the seat in front of you has suddenly leaped up and onto the screen.


The real appeal of the film’s 3-D is the illusion of depth, which emerges nicely when seen in a reasonably well-preseved print. In order for the 3-D illusion to register on the eye, there are fewer closeups and less intercutting than in most movies; the long takes and deep focus make you feel as if you are looking into a world that really exists within the screen.
This works well during Kirk’s flight from her mysterious pursuer, but even more alarming are some of the stunts – not just the aforementioned run through a burning wax museum, racing under a balcony that collapses literally a second after Price has gone through, but also an extended fight scene that has Bronson force leading man Paul Picerni onto a guillotine. The wide-angle coverage of the scene, without intercutting shots of stuntmen, helps sell the danger of the situation (which actor Pircerni has claimed was all too real).
This wonderful sense of credibility, even amidst a fanciful melodrama, lends the movie an air of conviction that is sadly lacking from many recent horror films, especially the rather nasty 2005 remake, which replaced the relative realism with an excess of CGI that turned the movie into nothing more than a dull special effects show. The 1953 HOUSE OF WAX may not be a full-blown masterpiece, but seen as it was intended to be, it is a magnificent piece of audience-pleasing entertainment.