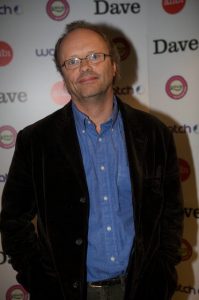 On his Blog, RED DWARF actor Robert Llewellyn revealed to fans that the cult favorite UK Sci-Fi comedy (originally on the BBC) was returning in a brand new season for the Dave TV satellite/cable comedy channel.

“So, the thing is, the whole point was that I was told not to say anything. Doug (Doug Naylor, co-creator/producer) told me, face to face, ‘don’t tweet this bobby. Not yet.’
So I didn’t. I was really good. I said nothing.
Then I spend a day in my voice over cell and know nothing of the interview Craig had done on the radio, which was, it appears, picked up by the Daily Mail, which, as you know is my fave all time newspaper. Ahem.
So then I get back to my trusty lappy and there’s a great slew of tweets telling me that Craig has once again spilt the beans. You’ve got to love him, he knows how to spin the scoop.
I’ve just spoken to Craig, he was as usual gloriously funny about it. He said, and I quote.
‘I did a radio interview and it just sort of slipped out.’


So yes, we are making a new series, commissioned by Dave, not a special or a movie or a one off dooberry. A full 6 half hour episodes of a brand new series.
The previous Red Dwarf Back to Earth Dave specials were incredibly successful. For a Channel like Dave to get viewing figures which beat BBC 2 and Channel 4 combined was an unprecedented achievement which has never happened before or since.
The plan at the moment, and this could change, the plan is that we record the new series in front of an audience.
Now, this is a complicated issue. The last time we recorded a show in front of an audience was in 1998. Anyone remember 1998?
No YouTube, no Facebook, no Twitter, no broadband, no HD video cameras in mobile phones. Okay, a few people had e-mail. I had a crude web page already, but it really was basic.
So when the audience came in the producers would ask them politely not to reveal any spoilers ‘on the world wide web’ as we referred to it then. I’m sure some people did, but so few people would have seen anything it really didn’t matter.
The fear among the producers now is that it’s impossible to imagine an audience of around 400 people at the recording of a TV show like Red Dwarf, where nobody does a bit of a hint on Twitter, or sneaks a picture on Facebook or posts a bit of badly shot video on YouTube.
It’s just too tempting, it’s too easy.
The producers are very worried and I can see why. The gap between recording a show and it’s eventual broadcast is quite long, especially on Red Dwarf. It’s a show which uses a lot of post production time. Special effects, tweaking shots, CGI, even, dare I hope for it, model shots, all take time.
By the time the shows are released on Dave in 2012, half the potential bloody viewers could know an enormous amount about it.

Though the RED DWARF: BACK TO EARTH three part mini-series was successful, many fans felt the comic edge of the somewhat downbeat, reflective storyline was lacking. Perhaps shooting in front of a live audience, despite the dangers of spoilers, will give the new series the spark and energy some thought was missing from the single camera movie-style TV venture.

For those not familiar with the series, it aired from 1988 to 1999 on BBC 2, and starred Craig Charles as Dave Lister, probably the the last human being from Earth left in the galaxy, after being revived from suspended animation (the brig) on the immense miing ship the Red Dwarf. All of the rest of the crew are dead from a radiation leak, and three million years have passed, before the sentient computer Holly (Norman Lovett or Hattie Hayridge, depending on what season or sex Holly currently was) determines it’s safe to resurrect him. He’d be all allone, save for the hologram of Arnold Rimmer (Brit Sitcom star Chris Barrie), Lister’s obnoxious room mate, the only person on the ship that Lister really knew. Death has not improved Rimmer, and they continue their “Odd Couple”-like dysfunctional releationship.
Fortunately for Lister, also onboard is Cat (Danny John-Jules), the sharp-dressing, vain and preening humanoid decendent of Lister’s pet cat, Frankenstien — the last of his kind, as well. The eager to please android Kryten (Llewellyn) joins the crew in Season 3, when the series really kicked into high gear.
Lister’s lost love Kristine Kochanski (played few times by Clare Grogan before Chloë Annett joined as a regular) rounded out the cast. She was actually a Kochanski from an alternate universe, where she rather than Lister had been saved. The female version of Holly originated in that reality, as well, and Holly Prime fell in love with her, causing the flaky AI to actually become her for  a good strech of time.
The series, created by Doug Naylor and Ron Grant, played skillfully with science fiction tropes and cliches, as well as twiting a wide range of TV and movie plots and conventions.
It also introduced a number of invented expletives, such as “smeg”, “smeg-head”, and “gimboid”, which are great fun to use.