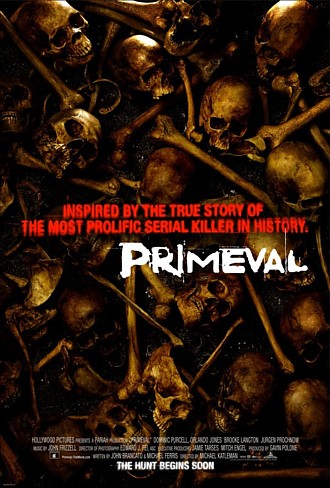 This tale of a killer crocodile in Africa resembles a throwback to Roger Corman-type exploitation movies from decades ago: Put together a cast of faces vaguely familiar from television and/or co-starring movie roles; put them in a film with a rampaging monster; go for the gore with gusto; and leaven the whole thing with a little unsubtle social commentary (as if to assuage the guilt of churning out lowest common denominator trash cinema). The difference is that, back in the 1970s, the production would have utilized cheap process shots and a rubber reptile; today, we get actual location shooting and a computer-animated croc. The result is a slick-looking movie that lacks the gritty goodness of old-fashioned exploitation and is too silly to take seriously as a mainstream thriller. What keeps it amusing – well, at least interesting – is watching the filmmakers try to walk the tightrope between the two.
The film announces its schizophrenic intentions in the opening scene: a lady U.N. worker, searching for more mass graves in an African nation torn by civil war, accidentally awakens Gustave (the name bestowed by the locals on the killer crocodile) and becomes his first on-screen victim. In a sense, human violence (in the form of war) gives birth to the primeval monster. Just in case we don’t get the point, we later learn that a local warlord, who has been exploiting the civil strife and its consequent lack of law-and-order for his own benefit, is called “Little Gustave.” You don’t have to have completed a course in Screenwriting 101 to know that the film won’t be over until the two Gustaves have met and had a chance to prove who’s the bigger bad-ass.
The plot follows television newsman Tim Manfrey (Dominc Purcell) who has recently botched a big story. His boss assigns him to assist Aviva Masters (Brooke Langton), a TV personality who does features about animals, in the hope of capturing Gustave on camera in time for sweeps week. Manfrey thinks the assignment (which he likens to “When Animals Attack”) is beneath him, but he has no choice. He and Aviva head to Gustav’s homeland, accompanied by black cameraman Steven Johnson (Orland Jones) and Aussie crocodile hunter Matthew Collins (Gideon Emery, considerably more restrained than the late Steve Irwin but still insisting that the croc should be preserved rather than killed). They hook up with local guide Jacob Krieg (Prochnow) and local villager JoJo (Gabriel Malema). It soon becomes apparent that their biggest threat comes not from Gustave; the search for the croc is really a sideshow compared to the human violence, including executions by Little Gustav, one of which Johnson captures on camera. Unfortunately for the croc team, the guards sent to protect them are actually in Little Gustave’s employ; soon they’re trying to retrieve the videotape and murder the witnesses. 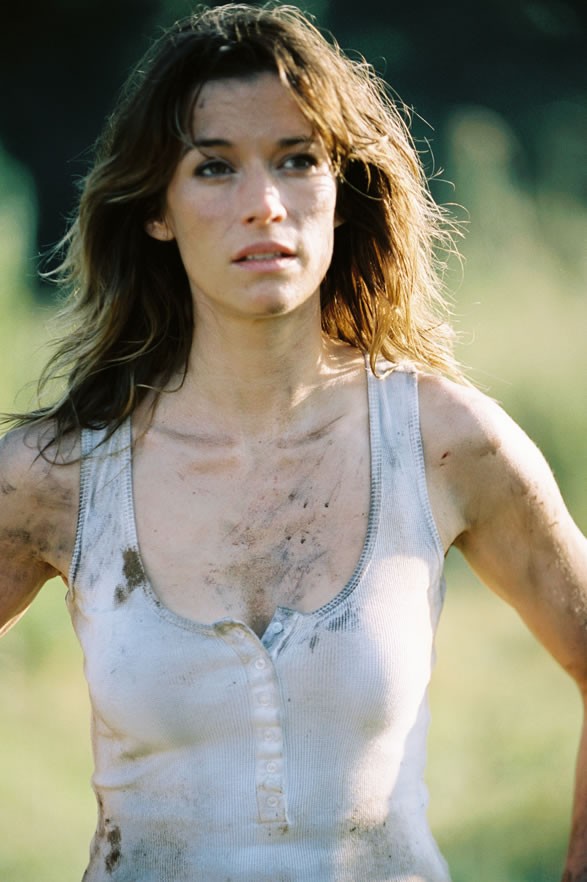 The movie’s little joke is that Gustave – as scary as he may be – is preferable to the human monsters. The point is first made midway, when one of the guards attempts to rape Aviva. After she manages to kick him in the balls and break something over his head, he gives up the idea of sex in favor of trying to kill her – but like a hero to the resuce, Gustave arrives just in time to chomp the bastard up into croc chow. Way to go Gustav! Attaboy!
Once you’re rooting for the croc, it becomes difficult to maintain the suspense. Fortunately, Gustave – following a tradition that goes all the way back to Moby Dick – is ruthlessly indifferent to moral distinctions when choosing his meals: he’d as soon eat the heroes as the villains. Again, this underlines the film’s attempt to portray Gustave as an embodiment of the horror of war – a form of violence that, once unleashed, cannot be restricted to killing only the bad guys.
As fun as all these thematic aspirations are, they do not always work to the film’s benefit. Initially, Gustave is presented as an almost legendary figure – something talked about but seldom seen, probably blamed for any and all deaths near the local watering holes, whether or not he is in fact responsible. The almost mythic nature of the beast gives him a fearsome stature that simply cannot survive the horror movie necessity of showing him on screen: once revealed, he is simply a crocodile – big and dangerous, yes, but just an animal, not a mythic monsters.
The computer-generated effects don’t always help. Gustave’s design is pretty decent, and some of his movements are pretty nicely done – particularly early scenes that show only brief glimpses and sudden attacks. But as the film goes on and we see more and more, the apparently irresistible urge to show off sets in: by the end Gustave performing with all the skill of an Olympic athlete, leaping out of the water like a human cannonball and even doing a 360-spin on his head to tail axis. In the low point, he outruns – on land! – one of the lead characters. The sight of the enormous bulk galloping with the speed of a gazelle is frankly absurd; if it works at all, it is purely as camp.
This moment underlines PRIMEVAL’s failure to reach the critical mass that would turn it into really terrific trash: it strives so hard for sincere social commentary that, when the horror rears its ugly head, the disconnect between the intentions and the execution is laughable. As a result, PRIMEVAL is seldom genuinely frightening or disturbing; even the more realistic horrors of war are somewhat muted by their context within a monster a movie.
The film is on sturdier ground when it embraces the crude effectiveness of exploitation cinema (e.g., Gustave’s interruption of the rape). There is also some decent humor, thanks mostly to the Orlando Jones character (who, faced with the horror around him, concludes sarcastically that slavery wasn’t such a bad thing: “Anything that gets you out of Africa is okay by me!”) Unfortunately, Jones’ cameraman falls prety to the cliches of the genre – he’s the buddy, and he’s black, so you can guess what his chances of survival are.


It is suprising that the screenplay would utilized this over-used strategy when it so obviously wants to be more than just another dumb monster movie. One almost gets the sense the writers John D. Brancato and Michael Ferris are simultaneously lecturing and pandering to their audience: “You see, this Third-World genocide stuff is important,” they seem to say, while lamenting that Manfrey’s television audience -and by extension, the audience actually watching PRIMEVAL – are more interested in sensational horrors with good ratings appeal, such as a croc that ate a white, blond female U.N. worker. As one African character caustically observes to Manfrey, Gustav should have eaten a white woman sooner because “that’s the only reason you are here.”
Brancato and Ferris seem to share the sentiment, offering up a killer croc as a way to lure in viewers while simultaneously striving to remain elevated above the bloody mess. The uneasy combo of carnage and commentary is interesting to watch, but it would have been far more effective if the two sides of this warring soul had embraced each other without pretension: the message would have come through just as clearly if the film hadn’t been afraid to deliver a monster that was genuinely scary.

This film is very loosely inspired by a real-life case in which a PBS crew attempted to capture a killer crocodile on camera, using a cage like the one seen in the film. As in the movie, the real-life version failed. Gustav briefly disappeared after the final attempt, leading the documentary to theorize that the reptile might have been mortally wounded while escaping from the cage; however, Gustva later re-appeared, and continues to be seen.
Although Gustav is no doubt a dangerous crocodile and has probably killed several people, the real-life animal’s predations most likely do not match those ascribed to him in film or legend. Most likely, any attack by a crocodile in the area is attributed to Gustav, and some people tracking the creature have endorsed some wild theories in order to draw attention to their efforts (such as the bogus theory that Gustav now kills not for food but for sport).
Despite the real-life pedigree, the advertising campaign conspicuously kept the film’s premise hidden. The trailers and posters for the movie proclaimed that it was the true story of the hunt for the world’s most prolific serial killer.
PRIMEVAL (2007). Directed by Michael Katleman. Written by John D. Brancato & Michael Ferris. Cast: Dominic Purcell, Brooke Langton, Orlando Jones, Jurgen Prochnow, Gideon Emery, Gabriel Malema, Linda Mpondo Lehlohonolo Makoko.