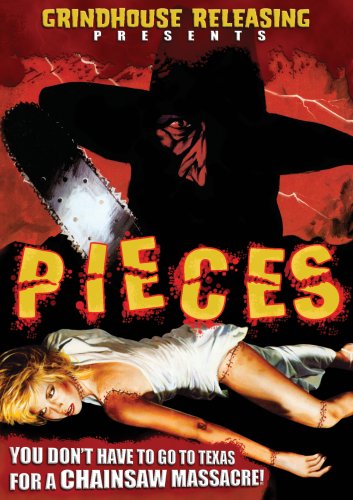 This oddball artifact from the ’80s is so bizarre it almost demands to be seen, whether it is any good or not: it’s a Spanish production that combines elements of American slasher films and the Italian giallo genre while offering more than enough sleazy graphic violence to qualify as one of the world’s all-time outrageous works of Euro-trash cinema. As a mystery-thriller, the scenario is ridiculous to the point of being amateurish, but the sick premise (a psycho-killer creating a replacement corpse in the image of his mother, assembled from the severed body parts of young female victims like the pieces of a puzzle) offers its own kind of demented fascination: you know you shouldn’t be watching this crap, but you just can’t look away. Fortunately, the gore is so far over-the-top (and in many cases so unconvincing) that PIECES achieves a sort of campy critical mass that makes it entertaining almost in spite of itself.
Set in Boston, the story begins with a young boy being chastised by his mother for assembling a puzzle picturing a naked woman; he responds by chainsawing mom into pieces, then gets away with murder by blaming an unknown assailant. Decades later, for reasons never quite explained,* a masked psycho-killer begins carving up young women on a college campus, using the pieces to recreate the image of his mother. The police arrest a suspect but the murders continue; assigning an undercover female officer also proves useless. But a young male student, initially a suspect, helps identify the killer just in time to prevent his next murder…
One unfortunately weak element of giallo cinema is the lackadaisical approach to the police procedural elements; PIECES takes this to new levels of idiocy previously unseen outside of an outright comedy; in fact, things get so bad you may find yourself suspecting that you really are watching a deliberate comedy. Here are just some of the “highlights”:

As if this were not enough, wait until you see the sublimely non-sensical ending, in which the assembled corpse’s hand grabs the young hero’s crotch as if emasculating him. There is also plenty of ridiculous dialogue, often delivered in hysterically bad dubbing. Christopher George (who provides his own voice in the English version) does his gruff macho thing well enough, and Purdum manages to be professional, but the supporting cast is hardly worthy of a high school stage play (check out the police officers’ reaction to findinda head in a closet – funny stuff). Even the usuallly reliable Paul Smith does little better than squinting in a way that screams, “You’re supposed to suspect me, but I’m too suspicious to really be the killer.”
Added all up, PIECES is one unintentionally hilarious movie, but it does deliver the horror; every time you think it’s going to drown in a sea of laughter, another murder takes place: heads roll, limbers are severed, and in at least one case we get a lovely lingering shot of a chainsaw carving its way through a woman’s torso. Most of the action is too silly to be taken seriously (even squeamish viewers – if they appreciate camp – can probably stomach some of the stomach-churning scenes, but every once in a while the violence hits its mark: the flash of chainsaw slicing of an arm in an elevator is shocking, and the briefly glimpsed aftermath of one victim, cut off at the waist and left in a bloody toilet stall, is effectively sickening. Gore-hounds, rejoice!
There are even a few moments whose effectiveness is not based entirely on gore (e.g., a slow-motion attack on a water-bed, while bloody, is also weirdly surreal). Also, the script follows its demented premise with a certain twisted logic, aided by editing that draws the parallel between assembling the nude puzzle and assembling the composite corpse. The film almost seems to be making some kind of statement about male sexist attitudes (e.g., depersonalizing women into nothing but an assemblage of body parts), but ultimately it is exploiting the concept rather than examining it.
Fortunately, PIECES is one of those films in which the myriad flaws become part of the entertainment value: the ludicrous plot and melodramatic acting take the edge off the misogynistic Euro-sleaze violence, and the film can be a reel hoot when viewed by an appreciate group of camp-film enthusiasts (knocking back a few rounds during the film can only increase the boisterous joy of the viewing experience). In short, PIECES is nowhere near being good, but it sure is fun.

Grindhouse has released PIECES as a two-disc deluxe edition DVD. As with their recent deluxe edition of THE BEYOND, this one comes in a clear plastic clam-shell case, so that the back of the wrap-around cover is visible through the clear plastic when the case is open, revealing a frame grab of one of the film’s most notoriously gory moments. There is a nice insert that folds out to reveal a copy of the American poster art (“You don’t have to go to Texas for a chainsaw massacre”); it also features the original Spanish poster art, a list of chapter stops illustrated with an image of the assembled corpse, and two pages of notes from Chas. Balun. Balun’s hyperbolic raving, which approximates the enthusiasm of a revivalist preacher, captures the tone of the film; however, although he acknowledges its flaws, he soft-pedals the essential fact that PIECES is fun because it is so bad.
The DVD menus cleverly use computer graphics of a slashing chainsaw for the transitions, along with such colorful imagery as a severed hand spurting blood, while short loops of the film’s bloody action play in the background.
DISC ONE offers a solid transfer of the uncut film, a trailer, some interesting audio options, optional English subtitles, and a couple Easter eggs.
There are three different soundtracks available.

There is an option that allows you to watch the Spanish version of the opening prologue, with the original title (Mil Gritos Tiene La Noche) and credits, which are interspersed throughout the sequence instead of stockpiled into one group just before the action shifts to modern day. After the prologue, the DVD shifts seamlessly to showing the rest of the Spanish-language version of the film.
There are two Easter eggs on the disc:

DISC TWO contains the bonus features (video interviews, photos galleries, cast and crew bios), plus a dozen or so trailers for other Grindhouse Releasing DVDs (e.g. CAT IN THE BRAIN, CANNIBAL HOLOCAUST, CANNIBAL FEROX).
The two video interviews are with director Juan Piquer and with actor Paul Smith. Both are wide-ranging, covering  their entire careers, but with a fair amount of time spent on PIECES.

The four galleries consist of Production Stills (behind the scenes), Pieces Publicity (theatrical posters from around the world), Video Releases (home video artwork), and Juan Piquer’s slide show. The later is actually a video interview, with Piquer commenting on some of the artwork for the film. The production stills contain some images of the graphic mayhem, including disturbing shots of a dead pig trussed up athletic shorts (matching those worn by the female victim on screen) for a shot of the chainsaw slicing into flesh.
The Cast & Crew entries are more interesting than most seen on DVDs. Besides biographies and filmographies, several of the titles contain links to access trailers or, in some cases, further interview snippets from Piquer and Smith, talking about specific films. This is one case where you will want to go through each entry carefully, so as not to overlook any of the goodies.
PIECES hardly seems like the kind of film worthy of a “deluxe edition,” but the Grindhouse double-disc DVD is surprisingly entertaining, even for someone not particularly enamored of splatter films. It presents the movie in all its gory glory, along with some good bonus features, particularly the Paul Smith interview, which is worth watching whether or not you are a fan of the actor’s work.
PIECES (a.k.a. Mil Gritos Tiene La Noche[“The Night Has a Thousand Screams”], 1982). Directed by Juan Piquer Simon. Written by Dick Randall and “John Shadow” (Joe D’Amato). Cast: Christopher George, Lynda Day George, Frank Bana, Edmund Purdom, Ian Sera, Paul Smith, Jack Taylor, Gerard Tichy, May Heatherly, Hilda Fuchs, Isabel Luque.
FOOTNOTE: