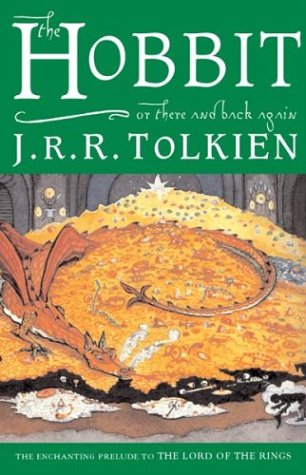 New Line Cinema announced today that they have reached a deal with Peter Jackson and MGM to make two films from  J. R. R. Tolkien’s THE HOBBIT.
However, it must be regarded as a major disappointment that Jackson, who had earlier indicated his strong desire to direct THE HOBBIT, will not actually helm either of the planned movies.   Robert Shaye, the head of New Line Cinema, and Peter Jackson had been involved in a very public feud over the profits that were supposedly owed  Jackson from THE LORD OF THE RINGS  films, with Jackson suing New Line to get a look at their accounting of the profits.
For his part, Robert Shaye bitterly denounced Jackson, noting he was paid millions of dollars, and saying he would never direct THE HOBBIT as long as he was in charge of New Line.  It now appears by offering Jackson the chance to executive produce the films, instead of directing them, Shaye will be keeping his word.  For his part, Jackson will get to exercise some degree of control over how THE HOBBIT is made, and be able to provide a steady stream of work for his WETA visual effects companies.

Shaye may have also been spurred on to pursue Jackson after it became apparent that New Line’s heavily promoted GOLDEN COMPASS was not going to be a big winner at the box-office.
Jackson is currently in Pennslyvania, shooting THE LOVELY BONES for Dreamworks, and he is scheduled to follow that with TINTIN, a project he will co-direct with Steven Spielberg, that will be shot in digital 3-D.  As Jackson is a big fan of 3-D, it seems possible he will push to make THE HOBBIT in 3-D, as well.
Here is Jackson’s statement from New Line’s press release:  “I’m very pleased that we’ve been able to put our differences behind us, so that we may begin a new chapter with our old friends at New Line.  ‘The Lord of the Rings’ is a legacy we proudly share with Bob and Michael, and together, we share that legacy with millions of loyal fans all over the world.  We are delighted to continue our journey through Middle Earth.  I also want to thank Harry Sloan and our new friends at MGM for helping us find the common ground necessary to continue that journey.”
New Line will  oversee the production of the two  films, THE HOBBIT and it’s sequel (THE HOBBIT II?) which like the LORD OF THE RINGS films, will be shot simultaneously  in New Zealand.  Pre-production will begin as soon as possible, with principal photography slated for a 2009 start, with the intention of  THE HOBBIT being released at Christmas 2010 and its sequel in 2011.
As producer, Jackson would appear to have a strong say in casting the film, and it would seem to be a given that Ian McKellan will return as Gandalf and Andy Serkis as Gollum.  SPIDER-MAN helmer Sam Raimi appears to have the inside track on directing the two films, but at this early date no official cast or director announcements have been released.