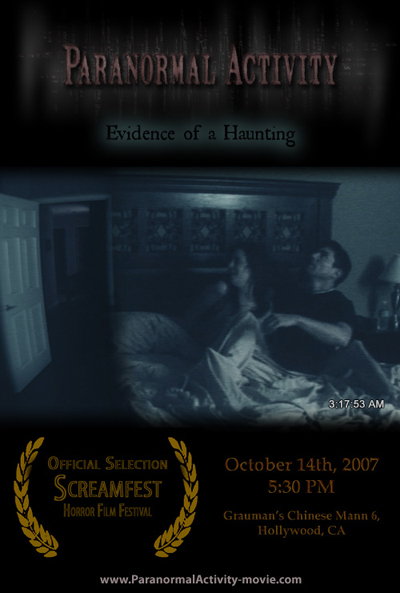 PARANORMAL ACITIVITY presents itself as “found footage” shot by a couple who became the victims of a demonic entity. Nearly a decade after THE BLAIR WITCH PROJECT, the faux-documentary approach is a little tired, as is the attempt to pass this story off as “true” (including a closing title card dedicated to the “victims”).
Fortunately, once you get past the artistic contrivance, PARANORMAL ACTIVITY is frequently terrifying. The story – essentially a two-person character drama – focuses on Katie, who has been haunted all her life by some kind of spirit or demon. Her boyfriend Micah buys a camera hoping to substantiate her claim, but it rapidly becomes obvious that he is less interested in helping her than in documenting the phenomenon; if anything, the camera seems to aggravate the situation, as if the unseen demon is feeding off the attention focused on it; the haunting intensifies, eventually reaching lethal proportions.
One way in which PARANORMAL ACTIVITY’s allegedly true story betrays itself is the presentation of Katie and Michah: despite absolutely convincing performances, the couple are obviously movie people with no real life outside the events we see in their house. The camera never follows them outside; there are only fleeting references to life and work, and they seem to have absolutely no support group of friends or family to help out when things almost literally go to hell.
In spite of this, PARANORMAL ACTIVITY works because of the low-key approach to the scares, which start so simply and build up so incrementally that you believe every one of them as if they were actually happening. Sure, there are passages where you may find yourself wanting to yell at the characters for being so stupid, and one or two moments are unintentionally funny (as when a psychic investigator bails out in a panic, having barely entered the room), but that doesn’t diminish the icy hand you will feel climbing up your spine when the floorboards start to creek and shadows shift in the darkness.
Unfortuantely, since screening at the 2007 Screamfest in Hollywood, PARANORMAL ACTIVITY fell of the radar. DreamWorks purchased the rights, with the intention not to release the micro-budget independent the film but to remake it as a glossy Hollywood production. In order to protect their investment, the studio suppressed subsequent festival dates and shelved the movie. Too bad – the original deserves to be seen.
PARANORMAL ACTIVITY (2007). Written and directed by Oren Peli. Cast: Amber Armstrong, Michael Bayouth, Katie Featherston, Mark Fredrichs, Randy McDowell, Tim Piper, Micah Sloat.