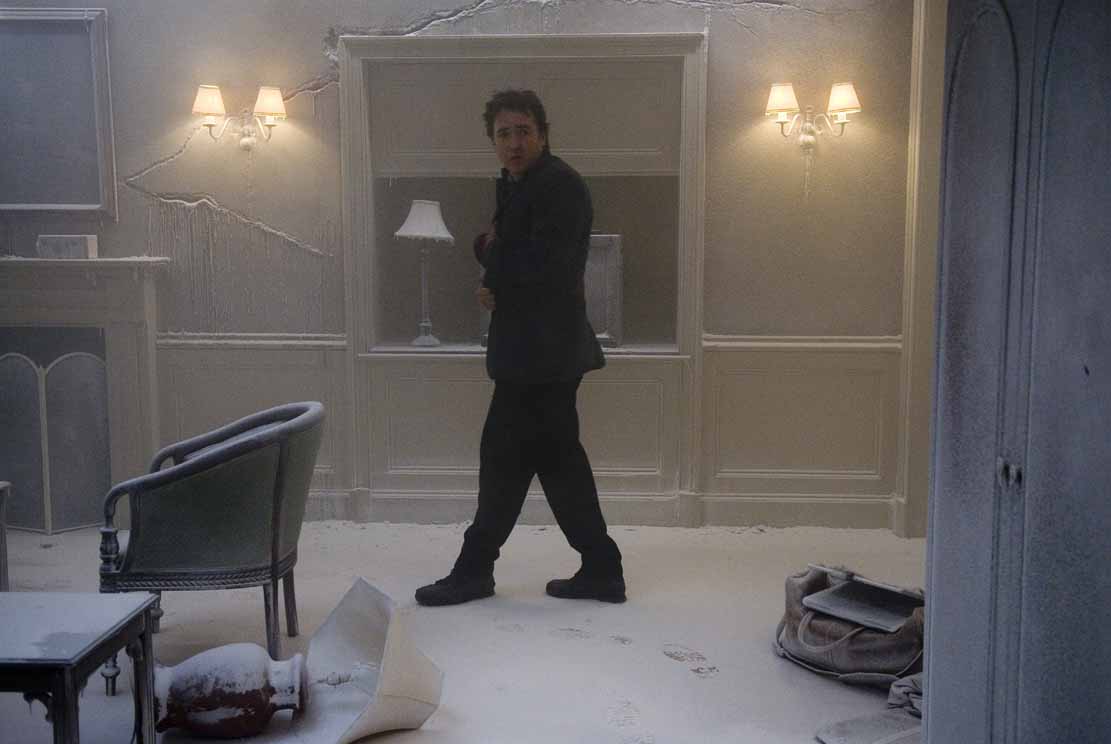 EDITOR’S NOTE: As mentioned in our rundown of genre films overlooked by the Oscars, John Cusack gives a one-man show in 1408 that rivals Will Smith’s somewhat similar turn in I AM LEGEND. Neither one got a nomination, but we think they should have.

After all the bones were broken and all the blood was spilled, after all the flesh was sliced and diced, after all the echoes of agony, the gnashing of teeth and the wailing of despair, had faded, it was not the highly-hyped HALLOWEEN, not the hostile HOSTEL, not the gritty GRINDHOUSE that was the most successful horror movie of the year. Instead, it was a little, low-key ghost story about a man spending a night in a haunted hotel room.

One might credit the success to the cache of the Stephen King brand-name, but that did little good for THE MIST, which dissipated almost as soon as theatre doors opened. No, one is forced to conclude that there is an audience of movie-goers who want to be thrilled and chilled, not gutted and filleted. 1408 catered to this demand by relying on the classic structure, as laid out by Victorian author M. R. James in the introduction to his book Ghosts and Marvels:

Let us, then, be introduced to the actors in a placid way; let us see them going about their ordinary business, undisturbed by forebodings, pleased with their surroundings; and into this calm environment let the ominous thing put out its head unobtrusively at first, and then more insistently, until it holds the stage. It is not amiss sometimes to leave a loophole for a natural explanation, but, I would say, let the loophole be so narrow as not to be quite practicable.

1408 follows the formula so closely that it might seem in danger of degenerating into a cliched mess, but it is rescued by the basic virtues of solid craftsmanship. Basically, any subject, even one as familiar as the ghost story, can be done right if it is done well. This film serves up the ominous portents, the haunted history, and even a dark and stormy night – and makes it all work, thanks to clever writing, directing, and acting.
On top of all this, we get another variation of an old standby, the Prophet of Doom Who Warns the Hero Away – a character who has been around, in modern form, at least since Melville’s Moby Dick. In this case, we have Samuel L. Jackson as Mr. Olin, manager of the hotel that houses the haunted room. He has a function; we know what it is, and we know he will fail – otherwise, the film would end before it got started. Yet his confrontation with Mike Enslin (John Cusack), an author who makes a living by writing about his experiences in haunted houses, plays like a legitimate drama, filled with believable human frustration over Enslin’s dogged insistence on ignoring the warnings meant not to intrigue but to dissuade him.

One strength of Stephen King’s writing, which James himself never really mastered, is characterization. For King, it was never enough to have simply an antiquarian, an ingenue, or a ghost hunter walking into a haunted place; his characters were always complex people, often haunted by their own inner demons, which were activated by proximity to supernatural evil. 1408 continues in that tradition (albeit much augmented by the screenwriters), by fashioning Enslin as man who never came to terms with the grief over the death of his daughter, which in turn led him to walk out on his wife (apparently after announcing that he was going out for some cigarettes). We are led to believe that he switched from writing literature to non-fiction because he was searching for evidence of life-after-death, which he hoped to find in one of the haunted houses that became his subject matter. Failing that, he turned even more bitter and cynical, eager to crush not only his own hopes but those of his readers.

With this kind of set-up, which is cleverly interwoven into the narrative, not all front-loaded as exposition, Enlin is inevitably heading toward a confrontation with forces that will challenge not only his beliefs but, more precisely, his unbeliefs. Room 1408 becomes a sort of private, personal Hell, populated not only by the ghosts of past victims but by the inner demons of Enslin’s mind. The manifestations are presented in a dramatic way that almost invites the audience to interpret the action as hallucinatory, as if Enslin’s guilty mind were torturing him not only with his past grief but with his own failure to deal with it.

Even with all the psycho-drama, 1408 never forgets to frighten its audience. Having introduced the actor in a placid way, the film has lulled the audience into a close identification that makes the viewer feel as if standing side by side with Enslin in the haunted room, so that when the ghosts start jumping, the audience jumps as well.

The actual manifestations are somewhat variable; fortunately, the film’s carefully wrought audience-identification strategy carries you past them. Director Mikael Hafstrom conceives the first couple of ghosts in gimmicky ways: the oldest one flickers in black-and-white like an old silent movie; a later one resembles a ’50s Technicolor movie. Far better are moments of mind-bending horror, such as a scene reminiscent of Polanski’s THE TENANT, wherein Enslin looks across the street and sees himself staring back from a window in the opposite building.

The script plays around with the conventions not only of the horror genre but also of the dramatic form, presenting an apparent opportunity for the protagonist to learn his lesson and grow as a person. Unfortunately, the inevitable plot twists are sadly predictable: when Cusak’s character nearly drowns early on, you can bet that later he will wake up thinking the rest of the movie was just a near-death experience. This kind of manipulation undermines the ending: the point becomes not to finish the story as effectively as possible but to “surprise” the audience with some unexpected resolution. Sensing the artificiality, the audience tunes out, and the ending lacks conviction. (Apparently, the filmmakers themselves sensed this, and were uncertain about how to end the film.)

Whatever its weaknesses, 1408 holds you captive. The film may seem like a one-room version of THE SHINING, condensed and tight rather than big and sprawling like the Kubrick movie, but Hafstrom does an impressive job of keeping its limited space visually interesting for feature length, and when all else fails the story succeeds on the strength of Cusack’s performance. The actor is allowed to give a virtual one-man show, ranging from funny to fearful, alternating between broad physical action (when the character explodes in rage against the room’s asault on him) with quieter interludes of angst and despair. Forcing the audience to experience his terror with an almost first-hand immediacy, Cusack runs the emotional gamut, delivering a performance as layered and complex as any of the 2007s Oscar nominees. Thanks in large part to his efforts, 1408 comes close to being a character study rather than a horror film – WILD STRAWBERRIES, with ghosts. Unlike too many movies that aspire to more than mere horror, this one achieves its goal without neglecting the fear factor.

Director Mikael Hafstrom and screenwriters Scott Alexander and Larry Karaszewski talk extensively about the film. Hafstrom cites Polanski films ROSEMARY’S BABY, THE TENANT, and REPULSION as influences. Unfortunately, the director tends to talk over the screenwriters and frequently delays subjects by saying “We can come back to that later.”  The effects is frustrating, and one suspects that some of the topics end up not as fully discussed as they might have been. For instance, Hafstrom never settles the question of who sent postcard that lures Enslin to Room 1408, which is acceptable, but he seems not even to have an interpretation of his own to offer.

Alexander and Karaszewski provide interesting details about the differences between the script’s first draft (written by Matt Greenberg), their own drafts, and later story changes made during post-production. Eventually, you get the impression that the creative team had trouble coming to definite decisions and resorted to the cop-out of leaving the interpretation up to audience. This approach can work, but it works best when the filmmakers have a rational worked out in their own minds, so that the clues they present add up.

The audio commentary makes clear that, despite the label, this is not truly a “director’s cut” (i.e., the cut sanctioned by the director before being re-edited by the producers). Rather, it is an alternate cut that includes ideas that were abandoned and scenes that were dropped or shortened to speed up pace or secure a PG-13 rating. There are a few more snippets of dramatic material (e.g., with Enslin and his father). When the paintings in the room change appearance to unnerving effect, one features a glimpse a nipple. (We learn that one of the room’s ghosts, who was not explained in the history Mr. Olin gives to Enslin, was added to a painting, because the filmmakers were afraid audiences would wonder where the character came from.) And Enslin’s crawl through the ventilator shaft, including a confrontation with a living corpse, goes on longer.

The director’s cut has Mike Enslin die, sacrificing himself in the fire he sets to Room 1408. Afterward, Mr. Olin shows up at the funeral to give Enslin’s personal effects to his widow, who refuses them. When a disappointed Olin returns to his car, there is a phony jump scare with a burned Enslin briefly glimpsed in the backseat. This is followed by a scene back at the burned-out hotel, which fades out while Enslin’s ghost calmly exits 1408, presumably to reunite with his daughter in the afterlife. The two sequences actually feel like two alternate endings, tacked together despite their contradictory nature: if Enslin’s ghost (looking perfectly normal) is back i 1408, then why is he appearing as a bogey-monster in the back of Olin’s car? This seems to be evidence that the filmmakers had trouble deciding on an ending, so they tried out three of four different ones; one ended up in the theatrical version; two on the DVD. Sadly, none of them is fully satisfying.