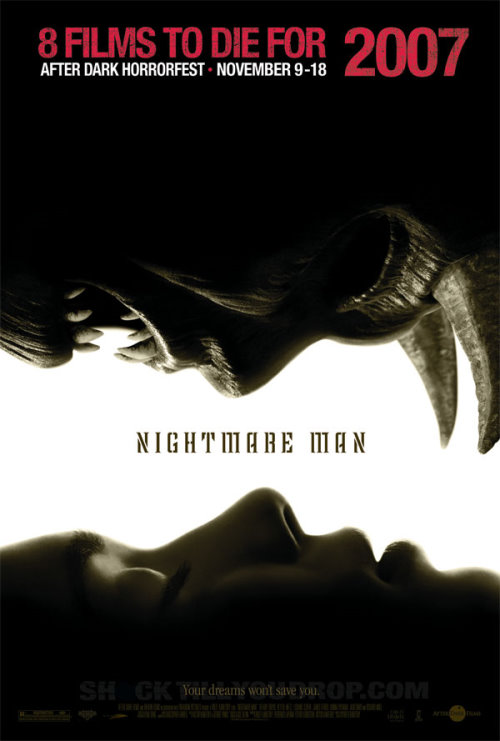 This low-budget, shot-on-digital horror film is an ambitious attempt to put familiar genre elements to good use. Writer-director Rolfe Kanefsky has a reputation for spoofery, but here he plays the horror relatively straight; there is humor, but it emerges mostly in the playful way he manipulates audience expectations, introducing plot threads that seem to lead in one direction and then twisting them around some other way.
The plot has Ellen (Blythe Metz) haunted by the titular “Nightmare Man,” who torments her dreams. Thinking her mentally ill, Ellen’s husband William drives her to a mental facility, but the car runs out of gas on the way. While William walks to the gas station, Ellen is attacked by the Nightmare Man and flees the car, winding up at a cabin occupied by two young couples on vacation. The occupants lock the doors to keep the Nightmare Man out, but the question remains: Does he even exist, or is he merely a figment of Ellen’s deluded mind?
This is a film that seems to revel in its low-budget nature. Kanefsky is fairly unapologetic about tossing in the de rigeur exploitation elements, including a fairly irrelevant lesbian sub-plot involving the two couples in the cabin. The idea seems to be that the audience did not walk in expecting refined subtlety, so why not just give them what they want? The saving grace is the obvious awareness of the familiar tropes, coupled with a clear effort to use them in clever, surprising ways.
The film mostly succeeds on its own terms, delivering satisfying chills. Ellen’s encounter with the Nightmare Man in the lonely car is particularly memorable; the extended fright sequence is as effective as anything in the SCREAM movies.
Later scenes are a bit less convincing, though still fun. The story uses a familiar “Five Little Indians” formula to good effect, and it is nice to see the characters actively defending themselves instead of running around in the dark like idiots, but the sight of a hot chick (Tiffany Shepis) brandishing a crossbow – as amusing as it is – borders on camp. You are not supposed to question whether she really knows how to use it; you are simply supposed to assume that in post-Ripley, post-Sarah Connor films, this is the kind of thing that female characters do. This post-modern approach does somewhat invite you to sit back and enjoy the on-screen action like a roller-coaster ride; you may still want to scream, but you are less involved with the characters.
Production values and performances are about what you would expect for an above-average movie of this sort – which is to say that everyone tries their best, but things are still a little rough around the edges.  Still, that all becomes part of the film’s charm, clearly identifying it as an alternative to safe, slick Hollywood film-making.

One of the film’s unconvincing but amusing conceits is that anti-psychotic drugs can keep evil supernatural forces at bay. This works as a plot device, but it does demand willing suspension of disbelief from the audience.

NOTE: This review is based on a digital video screening of the film, before it was transferred to 35mm and remixed for Dolby Surround Sound.
NIGHTMARE MAN(2006). Written and directed by Rolfe Kanefsky. Cast: Tiffany Shepis, Blythe Metz, Luciano Szafir, Hanna Putnam, Jack Sway, Richard Moll, Aaron Sherry.
[serialposts]