This film goes a long way toward giving remakes a good name. It takes a not particularly memorable film – one of a myriad holiday horror titles to follow in the wake of John Carpenter’s HALLOWEEN (1978) – and turns it into a crowd-pleasing horror movie that is actually much better than the slasher films of the 1980s from which it borrows its template. It delivers more than enough gore to satisfy the horror hounds – all of it comin’ at ya in glorious 3-D – but it never feels sadistic or off-putting.
Equally impressive, screenwriters Todd Farmer and Zane Smith successfully manipulate the mystery and suspense elements to create an effective thriller almost from beginning to end. Their script keeps audiences guessing about the killer’s identity. Although it resorts to a cheat or two to throw you off the scent, there are clues that will alert sharp-eyed viewers to the cheats, so in a sense the film plays fair.
The 3-D photography is pristine, clear, and beautiful – not like the blurry old double-image stuff scene in the 1950s and 1980s. Director Patrick Lussier predictably uses the technique to deliver some literally eye-popping visuals – at times his work seems almost as much inspired by Lucio Fulci (ZOMBIE) as by the 1981 namesake film – but the effects are delivered with a gusto that has viewers roaring with approval rather than gagging in disgust.
Unfortunately, the film suffers from a handful of unintentionally laughable moments – or at least, if they were meant to be funny, the filmmakers did not signal their intent very well. In a few places characters do dumb things of the sort that remind you this is only a movie. In other cases, for no apparent reason they delay taking obvious action: an alarm button is pushed only after a co-worker has been murdered; a gun is fired only after the killer has impaled a victim.
Only occasionally does the film fall prey to the lame elements inherent in the slasher formula, such as the unstoppable killer who takes a licking and keeps on ticking. (And the filmmakers seem completely unconcerned about the muscle atrophy that would occur during a year-long coma, which would be more than enough to prevent the killer from going on a rampage in the hospital upon awakening.) Also, the title “My Bloody Valentine” seems a vestige of an ealier age: Valentine’s Day doesn’t figure into the murderer’s pathology in any significant way; the back story explaining the atrocities is all about a cave-in that led one miner to kill his co-workers in order to save air while waiting to be dug out.
These silly little moments demand that you go with the film and just accept it for what it is, instead of winning you over. Which is too bad: Although this is a genre effort and proud of it – clearly fashioned to please its target audience of slasher fans and gore-ounds – MY BLOODY VALENTINE IN 3-D is otherwise good enough to appeal to a wider range of scary movie enthusiasts, as long as they are not too squeamish about on-screen carnage. 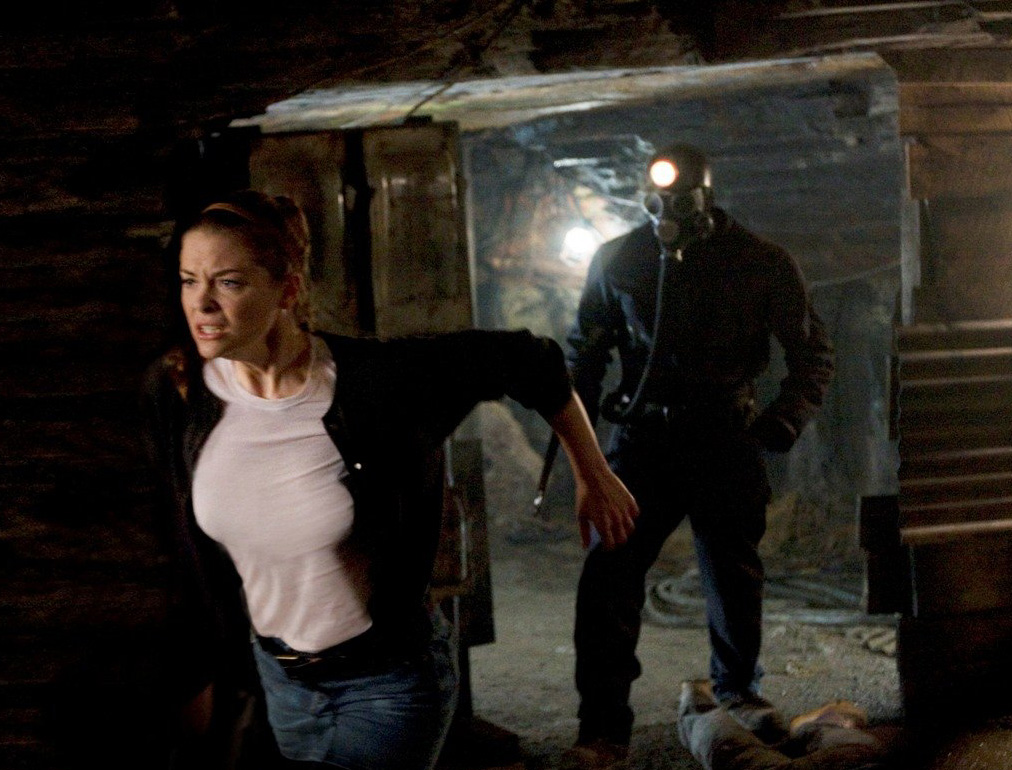 I am no fan of slasher films, and I came to this with no expectations – who needs another remake? – but it won me over in spite of myself. After nearly a week of sitting through five of the After Dark Horrorfest’s “8 Films to Die For,” MY BLOODY VALENTINE reminded me that gruesome horror can indeed yield a film that is not merely disgusting but actually enjoyably frightening.
MY BLOODY VALENTINE (2009). Directed by Patrick Lussier. Screenplay by Todd Farmer and Zane Smith, basedon the 198a screenplay by John Beaird, from a story by Stephen Miller. Cast: Jensen Ackles, Jaime King, Kerr Smith, Betsy Rue, Edi Gathegi, Tom Atkins, Kevin Tighe, Megan Boone, Karen Baum, Joy de la Paz, Marc Macaulay, Todd Farmer.