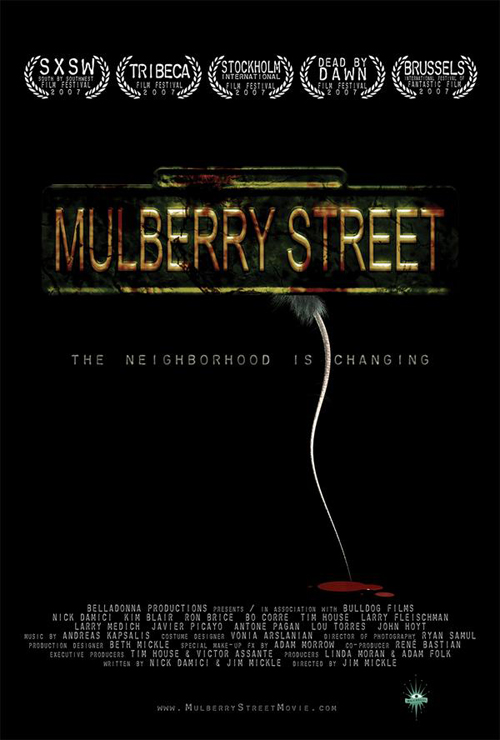 This horror film set in Manhattan, told from the point of view of a bunch of working class stiffs, is half-brilliant and half-okay. The dingy lighting and shaky camera work, combined with a solid script and convincing performances, create an almost documentary feel that lures the audience into the dark situation and sets them up to take the fall when the horror strikes from the shadows like a sap to the back of the neck. The premise is that a new development in a rundown neighborhood has stirred up some particularly nasty, infectious rats, who start nipping the human characters. Although the story is told mostly from the point of few of the characters in one particular building, a series of newscasts shows that the phenomenon is spread throughout the city. Just as viewers are beginning to imagine swarms of homicidal rodents engulfing the building a la THE BIRDS, the story reveals its true direction: those bitten by the rats become infected – and start to mutate into rat-like humans who kill and devour their former friends.
MULBERRY STREET never quite comfortably makes the transition from a more realistic, believable form of horror (the rat attacks seem exaggerated in detail but not really impossible) into George Romero territory (with the obvious exception that the neighbors are turning into rats rather than zombies). As if sensing this, the director keeps the camera shaking and the cinematographer keeps the images dark, so that you cannot clearly see the “f-cking rat people” (as one character calls them). The technique ultimately grows irritating because it becomes almost impossible to follow most of the action.
Story-wise, things get a little shaky around the halfway point, when the city goes into full meltdown mode and the characters either batten down the hatches or rush out into the pandemonium to save someone. In an effort to rip apart audience expectations, major characters are killed off – which is fine – but the characters who have tried to save them are too-matter-of-fact about the loss, undercutting the drama and moving the film more in the direction of a formulaic genre piece.


Thankfully, the film delivers a reasonably moving, if slightly muddled, ending, which (like the rest of the film) bears more than a passing resemblance to NIGHT OF THE LIVING DEAD. (The impact is muted because the fate of one character is unclear: Is she dead or tranquilized? And if she is supposed to be dead, why not just shoot her with a bullet instead of a dart?)
Co-writer Nick Damici gives a strong performance in the lead role of Clutch, a former boxer battling the infestation. The rest of the cast is convincing as well, in a down-to-earth, everyday sort of way that avoids the melodramatic stereotypes of the genre. (The exception is the WWII vet – a demolition expert – who shouts, “Anzio” before immolating himself and the rat-people swarming into his apartment – a cornball moment that does work.)
In the great tradition of horror films in which ordinary people rise to the occasion in the face of attack by horrible monsters, MULBERRY STREETS suggests that New Yorkers will fight like hell to the finish even when little if any hope remains. It sounds cornball, but the movie tries – mostly successfully – to make you believe it.

MULBERRY STREET seems to make a deliberate effort to join the ranks of Hollywood Closet movies filled with homosexual innuendo. Clutch is a single father whose wife is long gone, but he is initially slow to respond to obvious overtures from his pretty downstairs neighbor Kay (Bo Corre). The film has a fairly typical gay supporting character (who, being also black, is twice doomed not to live till the closing credits); what is a little less typical is that the character is Clutch’s roommate, and he evinces some rather obvious jealousy when Kay pumps him for personal information about Clutch. Both of the romantic rivals for Clutch’s affection become infected, but when Kay re-appears in rat-form, Clutch immediately exterminates her like vermin. His response to the reappearance of his roommate is completely different, with a soulful exchange of glances. Realizing that he is not being attacked because he, too, is infected (crossing the line that separates “us” from “them”), Clutch grabs his roommate and dives off the roof of the building, plunging them to their death. In effect, the two infected men die in each other’s arms, their bodily fluids intermingling on the bloody pavement.
Is the rat-virus a metaphor for AIDS? Possibly, but the film offers other interpretations, tapping into other current cultural concerns, such as September 11, 2001, and the Iraq conflict. One character blames the viral outbreak on Osama Bin Laden (“That rat bastard!”), and Clutch’s daughter is an Iraq veteran, returning home after plastic surgery to repair a wound on her face. If anything, the horrifying outbreak in MULBERRY STREET seems to be a repository for all the free-floating anxieties plaguing New Yorker at the moment.
MULBERRY STREET(2006). Directed by Jim Mickle. Written by Nick Damici, Jim Mickle (co-writer). Cast: Nick Damici, Kim Blair, Ron Brice, Bo Corre, Tim House, Larry Fleischman, Larry Medich. Javier Picayo, Antone Pagan, Lou Torres, Larry Fessenden.
[serialposts]