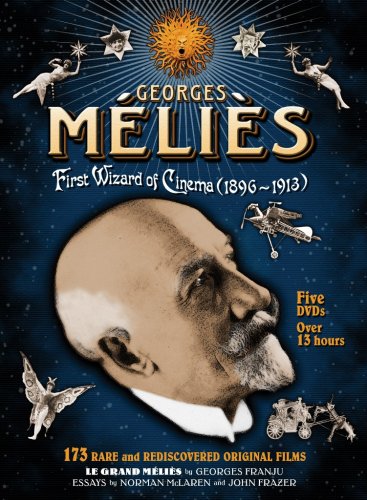 The Los Angeles Times has a brief rundown on Georges Méliès: First Wizard of Cinema, new five-disc DVD box set that combines 13 hours worth of short films made by Méliès between 1896 and1913. Méliès was the father of film fantasy and special effects. A stage magician, he initially thought that the new medium of motion picture film could be used to capture his live act, but he found that the illusions lost much of their appeal when they were not seen live in front of the audience. The story goes that he was out filming a car going down a street when the camera jammed; he fixed the problem and resumed filming. When the footage was processed and projected, he was amazed to see a shot of an ordinary street car suddenly turning into a hearse: Méliès had discovered the magic of the jump cut! (The hearse may be a macabre detail added to make the story more interesting, but I have yet to read anyone who doubts the essence of the story.)
Realizing that the camera could make its own kind of magic, Méliès went on to discover other kinds of special effects: miniatures, animation, slow-motion, dissolves, and super-imposures. He built the first movie studio and used his new-found techniques to make a series of entertaining short films filled with whimsy and wonder. The most famous of these is probably “A Trip to the Moon” (1902), which combines elements of Jules Verne and H.G. Wells. Fantasy rather than science fiction, the film has a group of men in business – rather than space -suits fired in a shell to the moon, where they breathe without trouble, there umbrellas take root in the lunar surface, and the annoying moon men explode when struck.
As a filmmaker, Méliès never really advanced beyond making novelty movies. His simple stories were an excuse to show off his effects, and despite his technical innovations, he never discovered the concept of “coverage” (shooting scenes from various angles to be edited together for greater dramatic impact); he always filmed his movies in the proscenium arch style, with the camera set well back, and the actors making entrances and exists as if in a stage play. Nevertheless, his films retain a Sense of Wonder – often comical – that keeps them entertaining to this day.