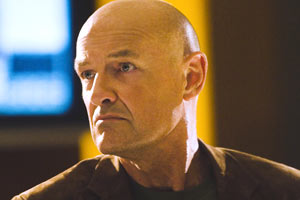 Judging from “The Awakening” (August 11, 2007), ABC’s new televisions series MASTERS OF SCIENCE FICTION is THE OUTER LIMITS by another name. There is a similar approach in terms of using science-fiction premises to address current social or political issues, and like the like the ’90s version of TOL (less so the ’60s original), MOSF feels free to push its sci-fi set-up into religious territory, with slightly embarrassing results, marring an otherwise interesting episode.
“The Awakening,” written and directed by Michael Petroni, from a story by Howard Fast, gets off to a great start with a prologue in Iraq, where an American soldier and an Iraqi soldier are on the verge of killing each other until they suddenly realize that they are inexplicably able to understand each other’s language. Later, they end up in comas, apparently caused by the dormant body of a strange being that knocked a helicopter out of the sky. Medical tests reveal that the creature is humanoid but missing the 23rd chromosome, the one that determines gender. Reaching the inevitable conclusion, the Pentagon and the President call in a retired expert on the search for alien life (played by Terry O’Quin). While the President and the military try to assess the potential threat, the coma victims begin delivering (first in writing, then vocally) a message of warning that turns out to be an amalgam of quotes from different religious texts. The gist of the text is: disarm or die. The question that faces the Earth is whether this is a message from God to bring peace to the world or a hoax perpetrated by aliens who want to invade.

The episode does a good job of balancing the available evidence, so that the characters who opt for a military solution do not seem unduly dense; in fact, it is easy to believe that they might be right. There is also some good political satire, with the rest of the world opting for disarmament while the U.S. wants to start launching its nuclear arsenal: when the President insists on international cooperation, it’s blatantly clear that he means everyone else should cooperate by going along with his plan, like it or not.
The episode generates a decent amount of suspense as it builds to its confrontation, with other nations ready to use force to make the U.S. stand down. And it’s nice to see old genre pros like O’Quinn (LOST) and William B. Davis (X-FILES’ Cigarette Smoking Man) on screen together.
Unfortunately, for the conclusion, Petroni pushes the religious buttons more like an evangelist than an entertainer, and the carefully calibrated ambiguity falls away, leaving little doubt that Earth has indeed been visited by angels whose isto make sure we hear each other (presumably fixing the problem that has afflicted us since the Tower of Babel).
As interesting as the idea is, it fails to convince. After all, understanding each other is not the problem; it is all too clear that people are quite capable of killing each other even if they share a common language. The problem is not necessarily communication but competing agendas, but that is too big a thicket to clear in a one-hour episode.
So instead we get a feel-good, be-happy, glowingly glorious finale with enough overstated pomp to remind one of Steven Spielberg at his most over-bearing.  (There is also more than a touch of M. Night Shyamalan’s SIGNS, with O’Quinn’s character realizing that his dying wife’s apparent non-sequitur was actually an important message, revealing some kind of grand design at work.) This heavy-handed deus ex machina seems out of place in a science-fiction show. Which is too bad, because the essential idea is actually fairly compelling : that the message of peace has been spoken by all religions in all languages, but humanity, having heard, has yet to take the message to heart and act on it.
One other note: the notion that angels are genderless seems at odds with Chapter 6 of the Book of Genesis:

The passage seems to imply rather clearly that angels (the “sons of God”) father children with human mothers.

One Reply to “Masters of Science Fiction: "The Awakening" – TV Review”