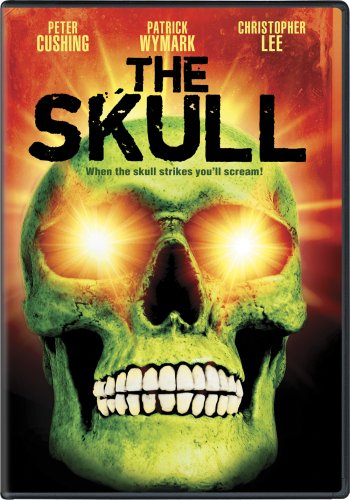 Up to now, Legend films is best known for the excellent colorized versions of Ray Harryhausen’s Columbia films. They have also worked with Harryhausen on colorizing SHE and THINGS TO COME. Recently, they licensed a package of films from Paramount including some horror and fantasy titles that they are bringing to DVD for the first time. Unlike their colorized catalogue, the Paramount releases are bare bones with static menus and no extras apart from theatrical trailers. Their initial Paramount releases include THE SKULL; George Pal’s production of HOUDINI; and THE POSSESSION OF JOEL DELANEY.
THE SKULL is an early Amicus effort based on Robert Bloch’s short story “The Skull of the Marquis de Sade”. Amicus always aimed to be another Hammer Studios, but most of their productions come off as pallid imitations. THE SKULL is a prime example.
Freddy Francis’ direction is capable but uninspired. His work for Amicus stood in stark contrast with his Hammer films (e.g. DRACULA HAS RISEN FROM THE GRAVE), likely due to the minimal budgets and poor scripts. Hammer regulars Peter Cushing, Christopher Lee, and Michael Gough cannot quite make Milton Subotsky’s clunky screenplay come to life. Characters come and go throughout the film – for instance Nigel Green, who plays a particularly incurious Scotland Yard detective in several scenes. The film is a mishmash of expository dialogue, pointless action and amateurish special effects – check out the skull floating in mid air, you can barely make out the wires holding it up. The final result is disjointed and boring. But then that describes most of Amicus’ output.
Legend’s DVD transfer of THE SKULL is very good, with no visible print damage and just a small amount of dirt near the beginning. The sound quality is excellent. The film has been rendered in its proper Techniscope aspect ratio. The only extra on the disc is the original theatrical trailer which, unfortunately, has been transferred in the wrong aspect ratio.

HOUDINI, though technically not a fantasy film, has some undertones of the supernatural. This 1953 production is one of those old fashioned Technicolor show business biographies. Director George Marshal and screenwriter Philip Yordan keep things moving along at a crisp pace, tracing Houdini from his carney roots to his ascension as a true legend of magic. There are lots of historical inaccuracies, a major one being the idea that Houdini died doing the Chinese Water Torture Escape (in reality he died of a burst appendix in a Detroit hospital). But who cares? This is a show business biography after all.
Tony Curtis (THE MANITOU) plays Houdini with just the right amount of energy and humor, always keeping the character larger than life. Curtis’ real life wife Janet Leigh (PSYCHO) plays Houdini’s wife Bess, who comes off as a one dimensional character spending most of the film in a constant state of alarm. The cast is rounded out by Torin Thatcher (THE 7TH VOYAGE OF SINBAD) as Houdini’s mysterious manservant.
Legend’s excellent transfer of the film preserves the vibrant Technicolor photography in its original 1:33 aspect ratio. The sound quality is also excellent. As with THE SKULL, the package only features the original trailer.

THE POSSESSION OF JOEL DELANEY has the feel of a bad 1970’s movie of the week. It has an ugly flat look throughout. Director Waris Hussein has little sense of composition or style and does not even attempt to create any suspense or real horror. In fact, the film has all the tension of an episode of THE BEVERLY HILLBILLIES. It is no surprise that Hussein quickly graduated to made-for-TV movies after making this. Star Shirley MacLaine turns in a bi-polar performance that ranges from shrill to shriller, and Perry King (THE CLASS OF 1984) cannot rise above the god awful dialogue he has been given to make the title character anything close to a menace.
Some pointless nudity and the occasional severed head might have been considered shocking when the film was released in 1972, but just make the film more laughable today.
Judging from the quality of the source print, this is not a film that has been treated well through the years. Again Legend again does an excellent job of transferring the film. However the excellent transfer does not help the film’s inherent problems with bad lighting and terrible sound. The disc has no extras beyond a scene selection sub-menu.
Over the next few months Legend has more Paramount titles, including THE SENDER and Hammer’s THE MAN WHO COULD CHEAT DEATH. Now, if they can only convince Warner Brothers to let them colorize Harryhausen’s THE BEAST FROM 20,000 FATHOMS.
RELATED ARTICLES:

4 Replies to “Laserblast: The Skull, Houdini, Possession of Joel Delaney”