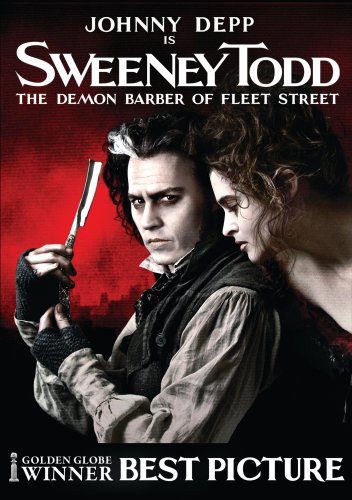 The pickin’s are a tad slim when it comes to horror, science-fiction, and fantasy titles released on home video this week, but quality more then compensates for quantity – and a little variety doesn’t hurt, either. There’s a musical-comedy-horror film, a computer-generated anime sci-fi adventure, some talking-singing chipmunks, an ersatz superhero movie based on an old television show, and some episodes of another old television show about a Time Lord who travels the galaxy in his Tardis. Of course, the grand (guignol) release of the week is SWEENEY TODD: THE DEMON BARBER OF FLEET STREET. By now, readers have probably grown bored with my rhapsodic hymns of praise to this this film, so for the present time I will restrain myself to pointing out that the film arrives on DVD in two versions, single-disc and double-disc. Sounds simple, right? Guess again. Depending on the store where you make your purchase, the packaging and/or special offers will be quite different:

For my money, the Costco version is one to get, although the steel book packaging sounds nice, too. I just wish there was a three-disc version, including a soundtrack CD (like the wonderful SUSPIRIA limited edition from a few years back).

From old-fashioned Gothic horror and tragic revenge, we flash-forward to the future with our next home video release. Anime fans are probably already enjoying their DVDs and Blu-ray discs of APPLESEED EX MACHINA, which came out on March 11; however, the HD/DVD combo disc comes out this week, so we give it a mention. A sequel to 2004’s APPLESEED, this is a computer-generated, action-packed post WWIII adventure featuring a female warrior and a cyborg sidekick. Shinji Aramaki is the director, and live-action specialist John Woo was on board, too. The two-disc DVD and the Blu-ray disc feature the same bonus features:

The other new release this week is the DVD of ALVIN AND THE CHIPMUNKS, which became a surprise blockbuster hit when released last year, insuring that even more old television shows would be turned into feature films.
Speaking of old television shows, two different DOCTOR WHO titles, from wildly different eras, time warp onto store shelves this week. First is THE TIME WARRIOR, starring John Pertwee, who played the Doctor from 1970 through 1974. Second is TIME LAST, starring Colin Baker, who played the Doctor from 1984 through 1986. The Pertwee episodes suffered from being too Earth-bound (what’s the point of being a Time Lord if you spend all your time on Terra Firma?), but the actor did cut a striking figure in the title role, emphasizing arrogance over eccentricity. Colin Baker’s run in the role was sadly truncated, but he brought a nice sense of humor to the part that made his episodes worth seeing.

Our final mention in this week’s column goes to UNBREAKABLE, M. Night Shyamalan’s disappointing follow-up to THE SIXTH SENSE. This 2000 title became the first in Disney’s line of live-action DVDs when it was released as a Two-Disc Vista Series in 2001. This double disc featured an anamorphic widescreen transfer with Dolby Digital 5.1 and DTS 5.1 sound, but the bonus features were limited to a handful of items on Disc Two: “Behind the Scenes” documentary; a “Comic Book and Superheroes” featurette; a multi angle feature for the “Train Station Sequence”; seven deleted scenes; and “Millionaire,” a short amateur movie Shyamalan made as a boy. The new Blu-ray disc released this week offers increased video resolution, plus an uncompressed Linear PCM 5.1 soundmix and the old Dolby Digital 5.1 soundmix, but not the DTS 5.1 mix. Otherwise, it contains all the familiar DVD bonus features, ported over to the new format, without any additions.