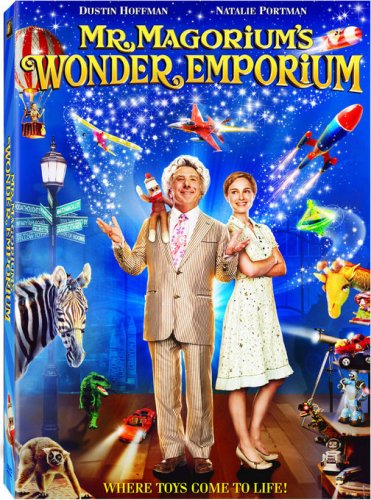 After some slow times, this week features a slight uptick in DVD releases of fantasy, science-fiction and horror titles. Unfortunately, quantity does not translate into quality in the case of the high-profile star-studded release, but there are a few cult items that should help the hardcore fan survive the drought. MR. MAGORIUM’S WONDER EMPORIUM was probably the biggest disappointment of 2007, coming from the pen of STRANGER THAN FICTION scribe Zach Helm (who also made his directing debut. The film arrives on disc in three versions: widescreen DVD; full screen DVD; and Blu-ray Disc. Bonus materials include: Strangely Weird and Weirdly Strange: The Magical World Of A Wonder Emporium Featurette; Zach Helm Pod; Sock Monkey Pod; Mortimer The Zebra Pod; Lincoln Man Pod; An Eccentric Boss And An Awkward ApprenticeFeaturette; To Meet Eric Applebaum, Start By Saying Hi Featurette; The Magical Toy Store Featurette.
More interesting, if less polished is the DVD release of AUTOMATON TRANSFUSION, the ultra-low-budget zombie flick that was such a hit at the 2006 Screamfest film festival. The movie gets off to a shaky start, but the basic idea (focusing on high school kids ill-equipped to handle the zombie apocalypse) works wonders. The gore effects, though cheaply done, are probably enough to turn off all but the most hardcore horror hounds, who should have a ball. Shot on high-def video, the film does not look great, but that is part of its independent charm. The DVD includes a 25-minute documentary about the making of the film; a short film by writer-director Steven C. Miller; four deleted scenes; and a couple of music videos.
Fans of Tom Baker’s incarnation of Dr. Who will be happy to see two of his adventures released on DVD this week: DESTINY OF THE DALEKS and PLANET OF EVIL. The Daleks were kept off-screen throughout most of Baker’s tenure, which turned out to be a good thing: the confrontation between the Doctor, the Daleks, and their creator Davros has some real spark to it, since the time off had recharged the batteries on the concept.
Seeking perhaps to cash in on the upcoming release of the big-budger feature film version of PRINCE CASPIAN, this week sees a CHRONICLES OF NARNIA: BOX SET REMASTERED VERSION. This is not, however, the 2005 blockbuster film; it is a three-disc set of 1980s television adaptations by the BBC: THE LION, THE WITCH AND THE WARDROBE; PRINCE CASPIAN AND THE VOYAGE OF THE DAWN TREADER; and THE SILVER CHAIR.
Speaking of cashing in on a feature film release, Echo Bridge Home Entertainment is offerng up the original PROM NIGHT (subject of an upcoming remake) as part of a double feature DVD that also includes MORTUARY. Double your pleasure; double your fun. Well, maybe not so much.
Finally, the ever reliable folks at Anchor Bay video have invented a new line of titles: Cult Fiction. As the name implies, these DVDs feature cult movies, usually science-fiction, fantasy and horror. This week’s slew of titles includes such gems as THE MAN WHO FELL TO EARTH and THE WICKER MAN.