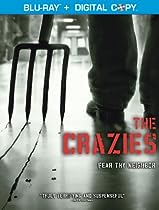 Tuesday, June 29 sees a quartet of recent theatrical horror, fantasy, and science fiction films making their debut on DVD, Blu-ray, and Video on Demand; plus a handful of previously available titles return from the crypt in new editions. THE CRAZIES (a remake of the George A. Romero film reviewed here) is a reasonably effective thrill ride, but it lacks the thematic interest of the original, thanks to a muddled attempt to appeal to populist sentiments. Anchor Bay’s DVD and Blu-ray discs offer reasonably extensive bonus features:

The other major theatrical releases arriving on home video are PERCY JACKSON AND THE OLYMPIANS: THE LIGHTNING THIEF and HOT TUB TIME MACHINE, although in this case “major” refers more to the size of the release rather than the quality of the films. The PERCY JACKSON Blu-ray comes with ten extended/deleted scenes, only some of which are available on DVD. The HOT TUBE TIME MACHINE discs offer the theatrical cut and an unrated cut, plus deleted scenes and a trailer; the Blu-ray includes additional features: promotional spots and four featurettes (Production: Acting Like Idiots; Chevy Chase: The Nicest Guy in Hollywood; Totally Radical Outfits: Dayna Pink; Crispin Glover: One Armed Bellhop). You can read a review of PERCY JACKSON here and a review of TIME MACHINE here.

Somewhat more esoteric is THE ECLIPSE, which received minimal theatrical exposure earlier this year. The story follows an American novelist (Aidan Quinn) visiting a literary festival where the local chauffeur is plagued by visions of the ghost of his father-in-law (technically, a doppelganger, since the father-in-law is still alive; in Irish folklore, such a vision usuall presages the person’s death). Arriving on DVD and Blu-ray, the film will be accompanied by a making-of featuette and deleted scenes.

In anticipation of the theatrical release of PREDATORS, 20th Century Fox is giving us a new PREDATOR ULTIMATE HUNTER EDITION Blu-ray disc of the 1987 original, starring Arnold Schwarzenegger. The disc features a new digital restoration of the film, plus these bonus features:

This week’s other home video titles include NOCTURNE: NIGHT OF THE VAMPIRE (an Aussie flick), NAVY VS THE NIGHT MONSTERS (which was originally announced for a couple weeks ago); UNCLE SAM (arriving on Blu-ray exactly six years – to the day – after its DVD debut in 2004); and a three-disc combo (Blu-ray, DVD, and CD) of WICKED LAKE: DIRECTOR’S CUT.
One other note: Alpha Home Video is releasing two budget DVDs on June 30, the day after the week’s other discs hit store shelves. DR. JEKYLL AND MR HYDE includes two silent versions of the Robert Louis Stevenson story; the most famous is the 1920 version starring John Barrymore, which added several elements to the story that have been retained in later film versions. SNAKE PEOPLE (1971) is a rather dire Mexican horror film featuring a few minutes of footage with horror star Boris Karloff (filmed in the U.S. and edited in later). Sadly, this is one of the last credits for Karloff, fondly remembered for his numerous classic horror movies, most notably as the monster in FRANKENSTEIN (1931).