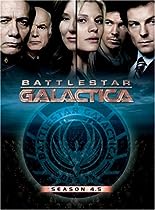 Tuesday is a busy day for horror, fantasy, and science fiction titles on DVD and Blu-ray disc, with several exciting releases – some new and some classic. No doubt the big seller will be BATTLESTAR GALACTICA 4.5, available in both formats. The four-disc DVD features approximately ten hours of bonus material:

The three-disc Blu-ray set offers the same features, plus BD-Live Functionality, MY SCENES Bookmarking, and U-Control Features (two interactive tracks that offer facts and trivia that can be viewed with each episode).
And of course, what would a new DVD box set be without a mega-box set that packages the new box set with all the old stuff that preceded it? That right: this week also sees the release of BATTLESTAR GALACTICA: THE COMPLETE SERIES. The Blu-ray version costs a whopping $209.99 on Amazon; the DVD version is a relative bargain at $171.99.


Speaking of TV box sets, TORCHWOOD – THE COMPLETE SECOND SEASON is available on DVD and Blu-ray. This is the DR. WHO spin-off that inverted the old formula of an asexual alien in favor of a bisexual human hero. Available separately is the episode “Children of Earth,” on both formats. Just in case you’re yearning for the good Doctor himself, the “Planet of Death” episode of DR. WHO (starring David Tenant and Michelle Ryan) is also available on DVD and Blu-ray. And for fans of Josh Whedon, there’s DOLLHOUSE: SEASON ONE, also available on both formats.

As for recent movies coming out on home video, this week’s offerings are limited to two Fant-Asia titles, DRAGONBALL Z: EVOLUTION and BIG MAN JAPAN. The former is a live-action version of the popular anime title; it disappeared from theatres even faster than SPEED RACER, but now you can catch up with it on DVD and/or Blu-ray. The later is a Japanese cult comedy, filmed in a faux documentary style, about a second-rate superhero who grows to giant size to fight monsters; it played art house theatres earlier this year, and now you can see it on DVD. Between the two of them, BIG MAN JAPAN is definitely worth a rental; the film itself does not always live up to the humorous potential of its HANCOCK-like premise, but it hits the target often enough to be enjoyable, especially once you get past the slow opening that introduces the guy going about his daily life, waiting for a call to action.

There are also a few classic and cult titles coming out. The most high-profile is the Criterion Collection version of Roman Polanski’s classic psychological horror film, REPULSION, which (like almost everything this week) is on DVD and Blu-ray. This director-approved special edtioin features a new, restored high-def digital transfer with uncompressed monaural sound on the Blu-ray disc; audio commentary by Polanski and Catherine Deneuve; a making-of documentary from 2003; a 1964 TV documentary film on the set; original trailers; a booklet featuring an essay by scholar Bill Horrigan.

Slightly less respectacle than REPULSION, but much more fun, is another piece of European cinefantastique, THE 10TH VICTIM.The premise of this tongue-in-cheek film is that in the future you can play a game of legalized murder in which you participate in ten hunts, five as hunter and five as hunted.  Marcello Mastoianni and Ursula Andress star as the game’s two biggest winners, who end up pitted against each other but find themselves falling in love. (For you AUSTIN POWERS fans out there, Ursula’s first kill in this film is achieved with gunshots fired from her bra, an image re-used in the Michael Myers spy spoof.)

And if you’re into ’70s Italian exploitation cinema, here’s one for you: ISLAND OF THE FISHMEN. This one was retitled SCREAMERS for its U.S. release way back when, and given a misleading ad campaign (“You will see a man turned inside out”). This one has a relatively high-profile cast of people who probably spent the whole movie wondering where their careers went wrong: Joseph Cotten (PORTRAIT OF JENNY, THE ABOMINABLE DR. PHIBES), Richard Johnson (THE HAUNTING), and Barbara Back (THE SPY WHO LOVED ME). The Americanized version added additional footage, shot in Bronson Cave with Mel Ferrer and Cameron Mitchell. Now at last U.S. viewers can see the original cut, with its “artistic integrity” intact.
[serialposts]