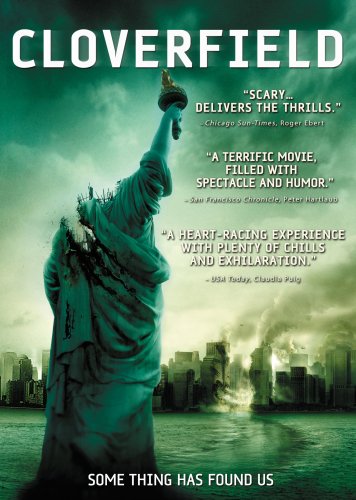 Among this week’s home video offerings are three recent theatrical releases that earned varying degrees of box office success and critical praise; a collection of silent short subjects from the very earliest days of cinema; and a set of British exploitation horror titles from the 1970s. Of course, the big blockbuster release is CLOVERFIELD, the giant monster movie that racked up some impressive opening weekend box office numbers thanks to a clever concept and a high-powered marketing campaign, before quickly running out of gas. With its hand-held video style, it will be interesting to see how the film’s monster action translates to the small screen – and whether many people are still interested now that the novelty has worn off. The film is available only as a standard edition DVD, which (atypically) includes several nice bonus features that explore the secretive making of the film. These include:

Paramount had been planning an elaborate HD DVD, filled with high-def bonus features, to be released on April 22, along with the standard DVD; however, that plan fell victim to the format wars that killed HD DVD. There had been rumors that Paramount was scrambling to release a Blu-ray disc in place of the abandoned HD DVD, even if that meant it would be a bare-bones, film-only presentation. However, the release of the Blu-ray disc has been postponed to a later date, to be determined.
Out on DVD and Blu-ray this week is THE ORPHANAGE, the excellent Spanish-language ghost story that terrified audiences in theatres with its subtle approach to spookery. The ghostly chills should translate well to home viewing, especially if you pop the disc in the machine around midnight on a stormy evening. Both the DVD and the Blu-ray disc contain the same bonus features: four featurettes (covering the development, makeup, special effects, and cast); stills galleries; trailers, and posters. The film is presented in its original language, with options for Spanish or English subtitles.
The predictably disappointing remake of ONE MISSED CALL gets released on DVD, HD DVD, and Blu-ray. One wonders why the studio bothered with both high-def formats when they could not be bothered to include any bonus features; all you get is the film itself, for what it’s worth. You would be better off checking out the DVD of the original Japanese film (which includes a documentary and cast-and-crew interviews). Seriously.
That’s it for high-profile releases. If you tastes run toward more eclectic fare – of either the art house or the grindhouse variety – there are a couple other releases that may get your palms all hot and sweaty. The Magic of Melies offers over a dozen silent short films made by George Melies, the father of special effects, between 1904 and 1908. There is also a documentary about Melies, who is one of the most important figures in the history of cinefantastique. Sadly, this collection omits some of his more famous titles, such as “A Trip to the Moon” and “The Haunted Castle.”
Finally, there is a the British Horror Quadruple Feature, which consists of FRIGHTMARE, HOUSE OF WHIPCORD, THE FLESH & BLOOD SHOW, and DIE SCREAMING MARIANNE. All four flicks were directed by Peter Walker, a minor cult figure who churned out exploitation titles in the 1970s. Walker’s style tended to be pedestrian, but he could occasionally deliver a visual flourish, and he usually supplied enough crude jolts to keep the fans happy. (He later turned toward a more traditional approach: his final directorial credit is 1983’s HOUSE OF THE LONG SHADOWS, the all-star teaming of Vincent Price, Christopher Lee, Peter Cushing, and John Carradine).