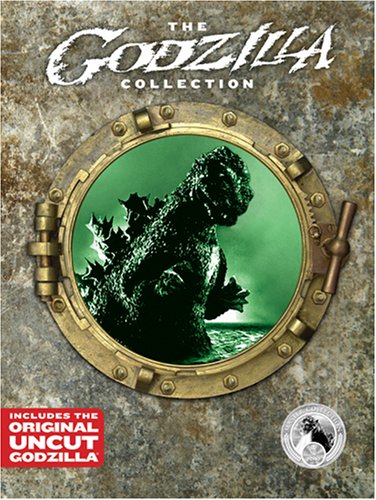 There is little new and exciting on home video shelves this week. Except for THE SANTA CLAUSE 3: THE ESCAPE CLAUSE (which arrives on DVD and Blu-ray disc, just in time for Christmas) sci-fi, fantasy, and horror fans will have to content themselves with oldies and re-issues. These include an “Ultimate Two-Disc Edition” of NOSFERATU; an HD DVD/Standard DVD combo of the Complete First Season of STAR TREK, the original series; an HD DVD release of TREMORS; and a DVD release of THE KILLING KIND, an interesting example of the “Horror of Personality” films that proliferated in the ’60s and early ’70s, in the wak of PSYCHO (directed by Curtis Harrington, this one stars John Savage and Cindy Williams, years before they starred in THE DEER HUNTER and LAVERNE AND SHIRLEY, respectively). Perhaps the most exciting release (at least for hardcore Godzilla geeks) is The Godzilla Collection from Classic Media. This box set gathers together Classic Media’s previously reviewed DVD releases of  Godzilla Raids Again,  Mothra Vs. Godzilla, Ghidrah, The Three-Headed Monster, Monster Zero, and adds their new TERROR OF MECHAGODZILLA DVD, which has yet to be released individually. All of the Classic Media DVDs include the original Japanese versions of the movies, along with the recut and dubbed American versions, plus audio commentaries and other bonus features. If you have not already purchased these excellent discs individually, this is your chance to see what you have been missing. Check out this week’s list of home video releases below the fold.