Lots of stuff science fiction, fantasy, and horror arrives on home video this week: a package of “eight films to die for,” a fantasy-comedy starring Adam Sandler, a scary time-travel thriller from Spain, plus some old titles making their debut on Blu-ray or DVD. Continue at your peril… 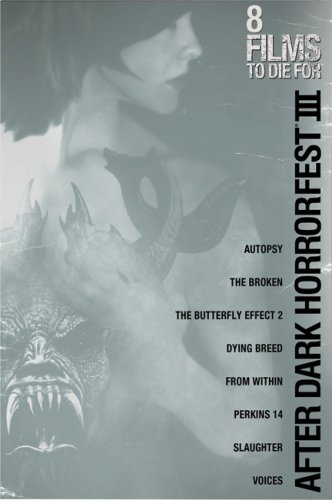 When it made its debut in November 2006, the After Dark Horrorfest was a sleeper success, built around a brilliant marketing concept: Take eight unknown independent horror films, package them together as a nationwide film fest, advertise them as being too intense to earn mainstream distribution, andput them in a few dozen theatres in major markets around the country for one weekend. The initial result was a $2.3-million opening weekend, good enough to edge into the bottom of the nationwide Box Office Top Ten – quite an achievement in an age when most low-budget horror films are lucky to get so much as a midnight movie screening on the way to home video. Unfortunately, the concept was higher than the quality of some of the films, leaving many viewers disappointed. Consequently, the 2007 After Dark Horrorfest generated less interest the following November, and its box office results fell below $1-million ($874,635, to be precise). After sitting out 2008, the fest returned this January, with less promotion, fewer theatres, and even more greatly reduced box office returns: $66,456.
In a way, the diminished box office does not matter. At this point the theatrical exposure is for promotional purposes – boosting the home video sales above what can be achieved with strictly direct-to-video fare. Thus, the current crop of “Eight Films to Die For” arrive on DVD today with as much fanfare as greeted their theatrical run. The quality of the films is still inconsistent, which makes them better fodder for home viewing (preferably renting rather than buying), so that you don’t waste both the price of a ticket and a trip to a movie theatre. Below is a rundown of titles (links lead to longer reviews):

All of the DVDs feature Dolby 5.1 sound and “Miss Horrorfest Webisodes as a bonus feature. There is also an eight-disc box set the packages all of the titles together.
[serialposts]
Here are some of the other highlights among this week’s home video releases…

Timecrimes (Magnolia DVD)
This Spanish time-travel thriller earned critical kudos when released to art houses last year. Unusually, it uses the time-travel premise as a jumping off point for generating enough scares to fill a good horror film, as our hero pursues a masked man lurking in the woods, stumbles upon a laboratory experimenting in time travel, steps into the machine to undo the masked man’s deeds, only to discover that the masked man really is…well, we won’t give it away, although you can probably guess. The DVD includes featurettes, short films and deleted scenes as bonus features. Read a review of the film here.

Bedtime Stories (Blu-ray & DVD)
This Adam Sandler film (about an uncle telling bedtime stories that come through) was a hit in theatres last year. It arrives on home video in three different versions: a single-disc DVD, a two-disc DVD (+Disneyfile); and a three-disc Blu-ray & DVD combo (including a digital copy). DVD bonus features include a blooper reel, deleted scenes, and two featurettes. The Blu-ray ports these over, adding BD-Liveas the only exclusive Blu-ray bonus feature. [NOTE: Amazon.com originally announced these discs for release on March 31, then changed the date to April 5 for the Blu-ray and April 7 for the DVDs.].]

Two Evil Eyes (Blue Underground Blu-ray)
This is the 1990 collaboration between George Romero and Dario Argento, consisting of two films based on stories by Poe. At the time, it seemed like two-thirds of an unofficial remake of Roger Corman’s TALES OF TERROR; now it looks more like a precursor to GRINDHOUSE and MASTERS OF HORROR. Like Blue Underground’s previous HD efforts, this Blu-Ray disc is gorgeous, bringing out excellent color and detail (though still limited by the occasionally rough source material – this wasn’t a lushly budgeted film). The extras replicate BU’s previous edition, including the documentary Two Masters’ Eyes featuring interviews withboth filmmakers. Blu-ray review here.

Cat in the Brain (Grindhouse DVD)
Regarded as Lucio Fulci’s 8½, this is a late-career film for a director whose best days were behind him. We’ve no complaints about Grindhouse’s new 2-disc edition, however. The image is taken from a new HD master andlooks remarkably good (having previously been consigned to the domain of the gray-market). If features both English and Italian audio options (though the majority of the language spoken before the camera appears to have been English). Extras include a long-form interview with Fulci (filmed just prior to his death in 1996) and footage of his only appearance at a stateside horror convention in 1996, another long-form interview with actor Brett Halsey, numerous trailers for other Grindhouse releases, and a more substantial-than-usual insert featuring remembrances from Lucio’s daughter, Antonella, David J Schow, and Eli Roth.  DVD reviewed here.

The Sinful Dwarf (Severin DVD)
Purportedly restored from a rare 35mm print “discovered in a janitor’s closet at the Danish Film Institute”, Severin’s DVD release proves that the well of Euro sleaze is indeed bottomless. As the filmmakers and actors have either passed away or successfully distanced themselves from the project, the DVD’s only extra is a humorous short produced by Severin that focuses on a couple petitioning Severinnot to release the film because of the negative effect it had on their lives after seeing it in a theater. The image itself is full-frame and in better shape than it probably deserves to be. DVD reviewed here.
The week’s other sci-fi, fantasy, and horror DVD and Blu-ray releases include:

Drew Fitzpatrick contributed to this article.