Although containing elements from the 1925 silent film version of THE LOST WORLD, KING KONG truly is the prototype of the giant-monster-attacks-city genre. It is also one of the greatest monster movies ever made, thanks to a winning combination of an exciting adventure story, marvelous technical effects, a rousing score, and some iconic performances. Most of all, the film survives the decades because it embodies an archetypal myth rendered so powerfully that it eclipses any dated dialogue and tecnical flaws. The title character is a fearsome, apparently unbeatable brute – until he falls in love with the blond and beautiful Ann Darrow (Fay Wray), which turns out to be his undoing.
The story begins with filmmaker Carl Denham (Robert Armstrong) looking for a leading lady for his new adventure epic, which he plans to film on location (apparently improvised without a script). He finds Darrow, who is down on her luck because of the Depression, and convinces her to sign on. Denham has acquired a map to a mysterious location known as Skull Island – according to legend, the home of a fearsome god or monster known as Kong. During the trip, Darrow falls in love with one of the ship’s crew, Jack Driscoll (Bruce Cabot). The expedition reaches Skull Island, where they find the natives (led by Noble Johnson) about to sacrifice a young girl to Kong, who lives on the other side of a massive wall. The natives decide that the blond Darrow would make a better sacrifice, so they kidnap and tie her to an altar on the other side of the wall. Summoned by gongs, Kong appears – a giant gorilla – and makes off with Darrow.


Noticing her absence, Denham and Driscoll mount a rescue party, but their numbers are quickly decimated by encounters with the island’s other ferocious inhabitants: dinosaurs. After Kong swings the remaining men off a log into a ravine, Denham heads back for reinforcements while Driscoll continues the pursuit. Kong defeats an allosaurus that tries to eat Darrow, then also kills a plesiosaur and a pteranodon. Driscoll rescues Darrow while Kong is distracted by the later. Kong follows them back to the wall, crashing through the gate and killing several villagers before Denham downs him with a gas bomb. Instead of a film, Denham returns to New York with Kong in chains, billing him as the “Eighth Wonder of the World” and charging admission to see him. On opening night, however, the enraged gorilla escapes when he mistakes photographers’s flashbulbs for an attack on Darrow. He pursues her through the streets of New York, capturing her and destroying an elevated subway train along the way. Eventually, he climbs the Empire State Building, where he seems to be out of reach until Denham hits on the idea of downing him with airplanes. The planes riddle Kong with bullets, and after setting Darrow aside, he plummets to his death hundreds of feet below. Standing over the colossal ape’s dead body, Denham remarks that it was not the planes that proved fatal. “It was beauty killed the beast.”
The film is filled with exciting action. The battle between Kong and the allosaurus is a particular stand-out – a great technical achievement that remains one of the best monster battles ever filmed. Of course, it helps enormously that we know Kong is fighting to defend Ann Darrow. Cabot and Armstrong perfectly embody their roles, particularly Armstrong as the adventurous Denham, willing to do anything to bring back or great film. Wray is perhaps the original Scream Queen, a stunning embodiment of beauty – so much so that we can easily understand why Kong risks and loses everything for her. But of course, Kong himself – a stop-motion model brought to life by the special effects team of Willis O’Brien – is the real star. In the great tradition of movie monsters, we identify with him as much as with the human; to some extent we even root for him – not only when he is fighting carniverous reptiles on Skull Island but also when he is fighting modern machinery in New York. Kong is undoubtedly a monster – he’s seen stomping natives mercilessly into the mud, when he’s not popping them into his mouth! – yet he manages to win our sympathey, too. This combination of horror and pathos has kept him alivein the public imagination ever since his debut, and will no doubt continue to do so for decades to come.

It is commonly assumed that Kong fights a T-Rex in the 1933 film (as he does in the 2005 remake). However, the carnivorous bipedal dinosaur clearly has three toes on his front claws; T-Rex had only two. Therefore, the dinosaur must be an allosaurus. 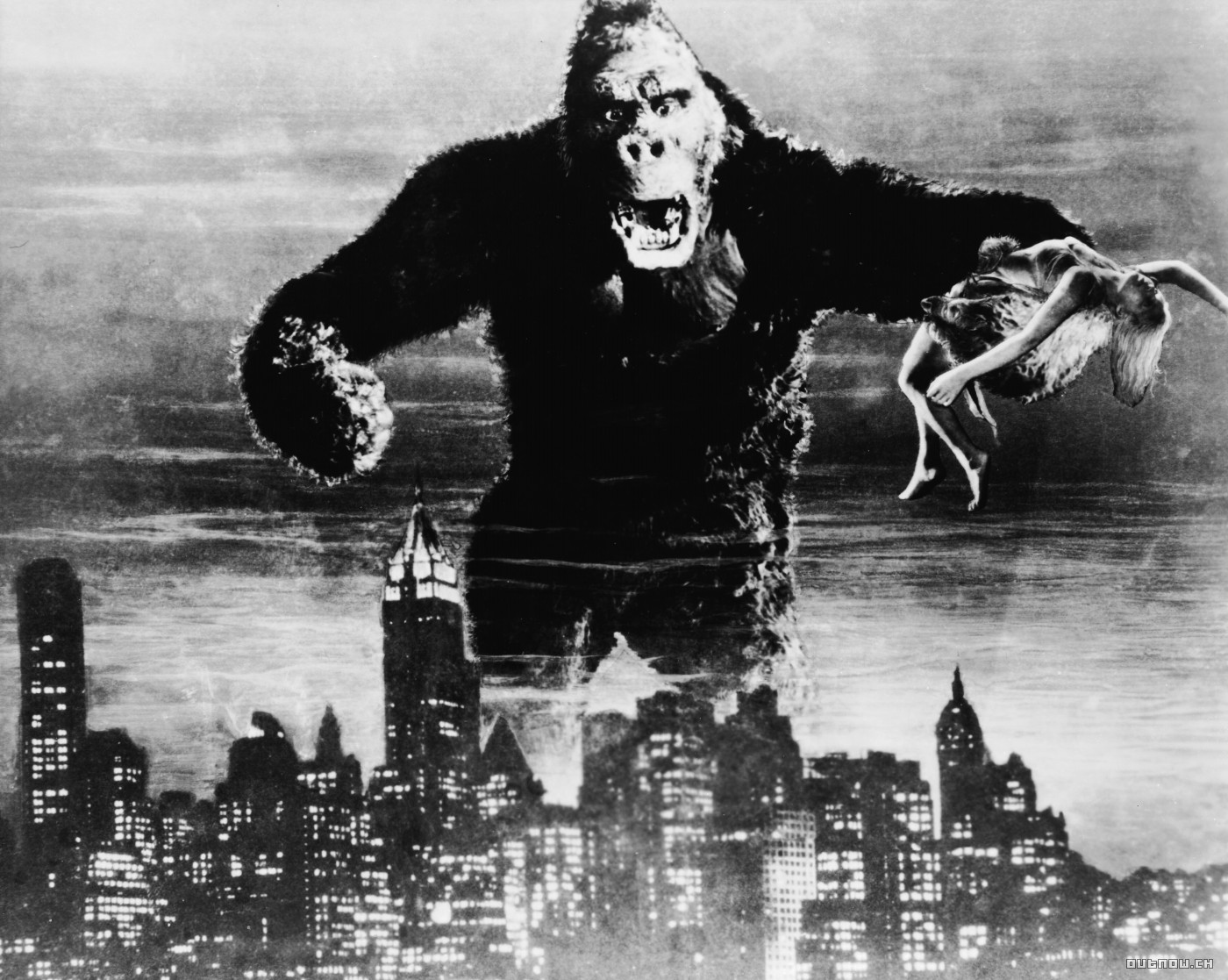